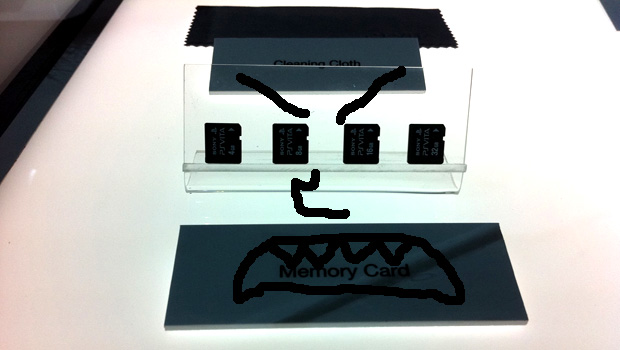 TGS was supposed to be PS Vita’s show. With the console launching in just about 3 months in Japan, and shortly thereafter in the rest of the world, this could be the last chance for Vita to really impress potential suitors.

Sadly, it’s also been a time for future consumers to find out some of the consoles little flaws, sort of like admitting to your future wife that you owe the government $50,000 the night before you get married. Case in point, the pricing on the console’s sometimes memory cards (which are apparently mandatory to play some games). Though US and European pricing remains up in the air, these suckers are going to set you back in Japan. Prices range from 2,200 yen (about $29 for a 4GB card) to 9,500 yen (about $145 for a 32GB card). On top of that, the Vita doesn’t come with a memory card, making the prompt purchase of one of these suckers inevitable for many consumers. I know I’m not supposed to do this, but I can’t help but compare that to the 3DS, which at $169 comes complete with a complementary 2GB SD card. Sure, maybe things different when the console leaves Japan, but so far, it’s looking like the PS Vita will do a lot more damage to your wallet than other dedicated gaming portables.

So how do you feel about this? Along with the recent revelation that PS Vita’s battery life isn’t so hot, do you think that console could be in for its own Nubageddon, or do you see this this as just another forgivable cost of technological progress?