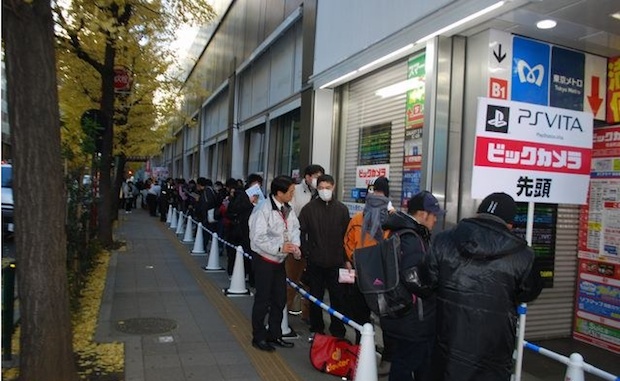 While we are still waiting on official numbers, it sounds like the PlayStation Vita has not sold through all of the estimated initial shipment of 700,000 units. The superhuge retailers in Japan, like Yodobashi Camera and Bic Camera, have said that you could pick up a Vita on launch day without pre-order, says Andriasang. NeoGAF found that some Japanese sites were reporting estimated sell-throughs at 85 percent for the WiFi model and 56 percent for the 3G model.

Mainichi Digital says that Sony was able to pump 200,000 more Vita units to retail for launch as a response to pre-order demand, so I wouldn’t exactly call the initial sales numbers a failure.

One thing that did sell out was Vita memory cards. The bigger ones, the 16 and 32GB cards, are completely sold out, according to reports. Despite the high pricing, 90 percent of Vita purchasers also bought a memory card.

The header image comes from Famitsu.com’s Vita launch coverage. Here you see more than 100 people waiting in line at the Yurakucho location of Bic Camera.