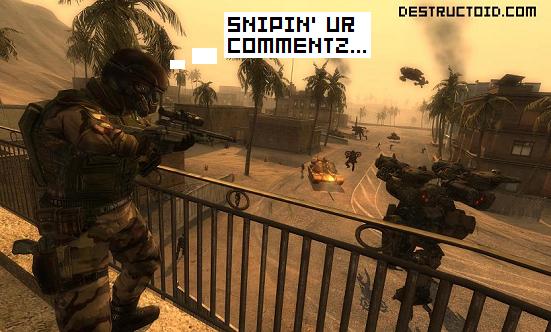 Do you like Quake? Do you like wars? Have you longed for some time to combine your two passions in videogame form, maybe giving the whole thing a beta-style vibe as you do? If that rather contrived set of predilections sounds like you, you’re in luck. It happens that I’ve just found myself in possession of no less than seven keys for the ongoing beta test of Enemy Territory: Quake Wars, direct from the warm, fragrant fingers of those gorgeous folk at Splash Damage, and I’m in the mood for throwing them wildly in the direction of our community.

So what do you need to do to get one? Well considering that we’re going to be sending seven members of the Dtoid army into almost actual battle with this one, we need to make sure that the keys go to only the most adept and able to handle themselves in a war zone. It’s fitting that these prizes go to only the strongest, only the most skilled, only the most, dare I say it, 1337. And after much discussion, screaming, plate throwing, and eventual hugging at Dtoid Towers, we think we’ve come up with the foolproof method of measuring such qualities.

As we all know, there is nothing, nothing in this world better at indicating how pro someone is than their placing in the comments section of a blog. This situation has only been cemented by Niero’s recent innovation of comment zero, truly the coolest and most hardcore thing a human being can achieve in his or her lifetime. With that in mind, this contest is going to be at least in part a case of “Comment zero for the win”, in that that fabled achievement, amongst others, will be part of the judging criteria.

We’ll be monitoring the comment counter for this post, and handing out keys to those who manage to snag a number composing part of the sacred figure of 1337, in addition to the glorious swine who gets in firster than first. Comments 0, 1, 3, 7, 33, 337 and 1337 will get keys, and whether you attempt to achieve those postings tactically or just through plain luck is entirely down to you. Just keep things interesting, keep things entertaining, and please, provide solid and sincere emotional support to those who miss out by by a single number either side. Now post!