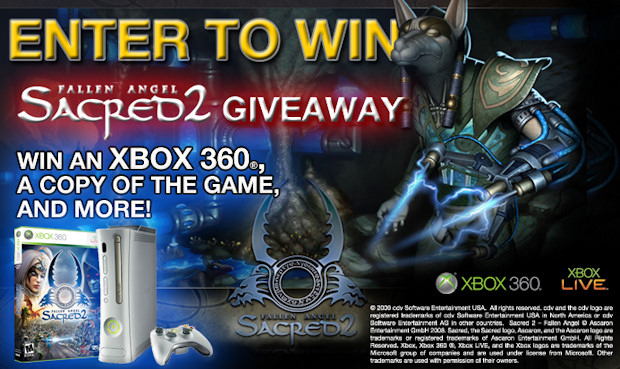 Sacred 2 is coming to home consoles this month and to celebrate, our friends at Rocket XL want to give someone in the Destructoid community an Xbox 360 along with a copy of CDV’s RPG sequel and some assorted swag. All you have to do is prove that nothing is sacred by posting an evil-minded reply to this post.

Yes … we did run a similar contest a while ago for the PC version of the game, but since that contest was my idea, I feel no shame in recycling it for my own purposes. If you want to win an Xbox 360, just post in this thread with evidence of the greatest sacrilege mankind has known. It can be a photograph or a video, just make sure its original, inventive, and not sacred in the least. The most sacrilegious and/or funny post wins the prize!

Here’s what we have to offer:

The contest ends on May 31, so make sure your entry is in this thread by then. You can enter multiple times, so if you have a more sacrilegious idea after posting, just post again because we won’t turn down the damn pageview. Once again, we’ll be able to run this contest worldwide, so feel free to enter, wherever you’re from.

We look forward to seeing you prove that, indeed, nothing is sacred.