If gamers had one lasting complaint about Prototype, it’s that the gameplay could get pretty repetitive. Side missions were particularly galling, featuring drab time trial exercises that felt like petty wastes of time. While speaking with design director Matt Armstrong, I asked if better side missions were coming to Prototype 2, and if they’d be more tied to the game world this time.

“A resounding ‘Yes!’ to this,” he replied. “The side missions and collectibles in the first Prototype were a real missed opportunity. The experience was really hurt by the fact that they were all so simple, abstract and completely disconnected from the world we were building and story we were telling.

“This time around, we’ve made sure that we have a much wider range of side content and that all of it is tied back into the fiction. Ensuring that all of these elements are supporting and reinforcing the story that we’re telling has resulted in a world that is much more rich, diverse and believable than the world of the first game. All in all, this is definitely one of the most improved areas of Prototype 2.”

Great news! But what of other aspects of Prototype, such as predatory stealth? Will they be returning, and are they improved?

“The predatory stealth aspect of the game is definitely still an integral part of the experience. This has now been expanded with new sensory abilities that allow you to read the environment around you and find targets to consume,” detailed Matt. “The goal has been to put much more control into players’ hands, allowing them to find their own targets in the world without us having to mark them on the mini-map.

“One of the most interesting aspects of these improvements is how they’ve been folded into a brand new feature we’re calling Black.Net. This is Blackwatch’s secure, encrypted communications network which contains details of all of the various operations and experiments that Blackwatch and Gentek are carrying out across the three Zones of the city. By hacking into this system via communications vehicles throughout the city, the player learns the identities of the key operatives associated with these missions and, by hunting down and consuming them, opens up brand new missions within the world.” 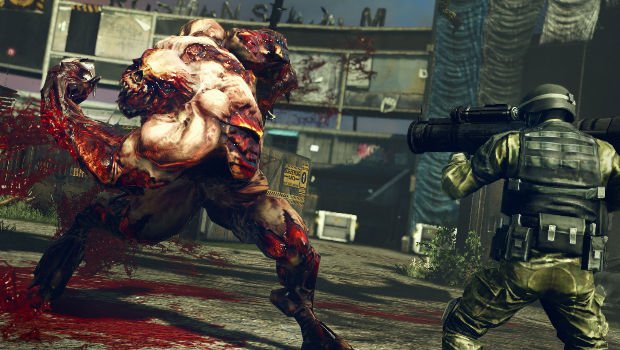 When talking to those who have played Prototype, I think the sorest point that a lot of them had was with boss fights and the “attack spam” methods with which they were fought. Hammering the same repeated attack commands to drain an enemy’s lengthy health bar isn’t much fun, so it’s a good job that Radical is more than aware of the problem.

“‘Attack spam’ was a pervasive issue in the first game that affected not just bosses, but pretty much every combat encounter you found yourself engaged in. One of our biggest challenges for Prototype 2 has been to make the battlefield much more readable and give the player to tools to deal with every eventuality without reducing the sense of over-the-top chaos that was such an epic and cool defining feature of the first game. I’m really happy with what we’ve achieved and the game as a whole has benefitted enormously from the changes.

“We’ve definitely heard and addressed the concerns around repetition that surfaced from the first game. It hasn’t just been about adding more gameplay options, either. We’ve really worked hard to ensure that missions have a much more diverse range of narratives, span unique areas, contain unexpected twists and are much better paced and presented experiences for the player.”

Radical seems to really know what worked in Prototype and what did not, which is a great sign. If the studio implements all these improvements fully, then I reckon this is going to be one of the 2012’s best.