Great technology does not necessarily make a great game, and while Crysis was a very well-done sandbox first-person shooter, the consensus held that it was lacking on the story side. A change of scenery was in order, to be sure, but Crytek has a lot more in store for PC (and console!) gamers this time around.

Crysis 2 takes place in New York City, and you will be doing your damndest to defend the metropolis from an invading alien force. It doesn’t sound like the most original concept for a piece of media, but when I spoke with the game’s executive producer, Nathan Camarillo, he assured me that Crytek’s technology, an engaging story, and dynamic gameplay will merge to deliver a thrilling and distinctive experience in Crysis 2.

[Editor’s note: I’ll be focusing on the tech and gameplay of Crysis 2 here; check back in two hours for a separate post on the nature of the story (but not its content; Crytek wouldn’t say much about that). –Samit]

In the packed theater of the Tribeca Grand Hotel, we saw presentations of the features that will make Crysis 2 special. Crytek’s CEO and President, Cevat Yerli, was on hand to show off the advanced technology behind the game, CryEngine 3, for which “dynamic” is the key word. First up was real-time color grading: CryEngine 3 can alter the tone of a particular scene on the fly, from bright and sunny to oppressive and full of despair. Camarillo explained its importance from a resource perspective by noting, “It allows us to author one set of assets, and then change the look and feel of the location without doing a lot of extra work.” It’s not just lighting, either; the next scene showed an interior of a warehouse with brick walls, and the amount of whitewash on them changed in real time to show more bare brick or less.

CryEngine 3 also has AI that includes dynamic cover. As you fire at enemies and even flank them, they’ll move around dynamically to take cover, putting objects between themselves and you. And when you do shoot them, a new hit reaction system will take effect, with all kinds of situation-appropriate animations. The final tent pole feature of CryEngine 3 is “highly interactive destructibility,” and the intent behind that, according to Camarillo, is to create a “rewarding” experience. “It’s not ‘destroy everything, go anywhere’; that’s not the kind of game we’re making,” he explained — you won’t be able to, say, punch the Chrysler Building and watch it collapse. But everything you do will have an impact on the environment, so even the bullets that miss their targets won’t feel wasted. 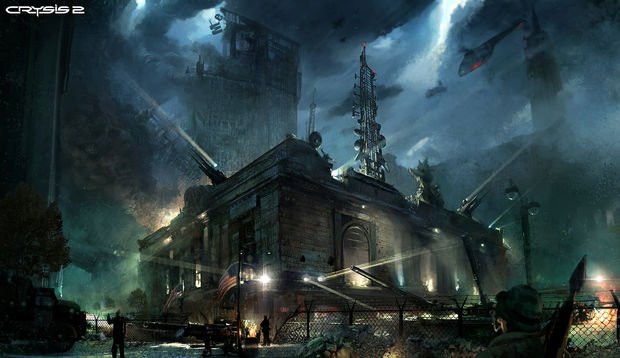 Destructibility is one of the core tenets of Crysis 2; the others are the Nanosuit 2, an upgraded iteration of the body suit from the first game, and what Yerli called the “catastrophic beauty” of New York. The original Crysis took place on a Pacific island that offered a jungle environment; Crysis 2 adds verticality to the equation to create an “urban jungle.” While the aliens have wreaked havoc on New York, it’s not merely a landscape comprised of shades of gray — the verdant foliage interspersed throughout the environment makes sure of that. “I think our version of New York will be very distinct,” said Camarillo. And thanks to the Nanosuit 2, you’ll be navigating the urban jungle with ease.

The Nanosuit 2 is an integral part of Crysis 2, since it is the way in which the player interfaces with the game. The idea of Crysis 2, Camarillo told me, is to “have you experience the story from the Nanosuit outward.” In fact, like New York, the Nanosuit 2 is a character unto itself; it’s a powerful piece of technology, and you’re not even fully aware of everything it’s capable of. The Nanosuit allows you to customize your play style; instead of the four abilities from Crysis (speed, strength, stealth, and armor), you’ll choose between armor and stealth to keep things simple.

Armor protects you with a shield, and the suit’s energy recharges more quickly, while stealth turns you invisible and muffles your movements. With combinations of these powers, Yerli explained, you’ll be able to play the game as a “hunter” or a “tank” (he drew analogies to the Predator and the Incredible Hulk, respectively). “Against the Nanosuit 2, you will regret to be an alien, I think,” he noted with a smile. 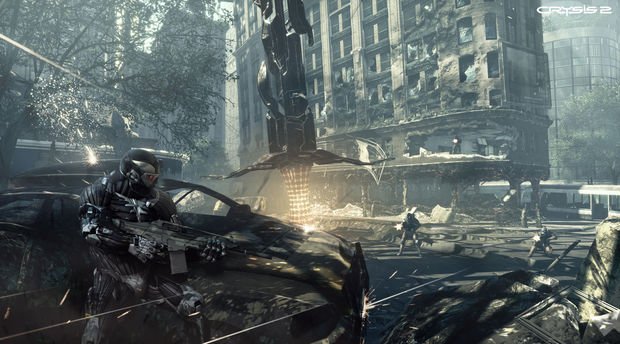 The first gameplay demo opened on a rooftop, and the date — September 3, 2023 — placed the sequence three years after the events of Crysis. The player character was fighting Crynet Security, a private military contractor; he is “between them and what they want.” At some points, Camarillo activated armor and went in guns blazing, while in other places, he cloaked himself and performed stealth execution. During a memorable rooftop sequence, Camarillo detached a mounted machine gun and let loose on the concrete-and-glass environment, sending dust and chunks of rock flying everywhere.

The visual spectacle that the destruction creates is something to behold; the game was running on an Xbox 360, and I noticed only a few brief bouts of slowdown in the work-in-progress build. I haven’t played Crysis, so I can’t say if the console version looks better than the first game did on PC, but trust me: it looks very good. The second and final bit of gameplay we saw was a street-level skirmish with some aliens. They’re much more formidable foes than soldiers, so one tactic Camarillo used was stealth: he went invisible, walked behind an alien, and blew him away with his shotgun. Of course, then the rest of the enemies knew where he was, so when he came at them, they took cover behind cars and concrete barriers. That’s when Camarillo picked up a grenade launcher and destroyed their cover to finish off the last few aliens.

At that moment, the ground began to quake, and a massive monolith rose up through a building in a vortex of ash and smoke. The rocky alien spire ascended skyward, darkening the area in a matter of seconds, and that was where the demo ended. I’m sure Crytek will bring a fantastic gameplay experience, but if they can manage to get gamers to care about the story, too, then we may have a real winner on our hands.