So in Bubble Bobble you play as “Bubby” or “Bobby”. I’m pretty sure Bubby isn’t a real name. The kids are brothers (twins I assume) so it’s easy to see that Robert/Bob/Bobby is the more loved child, because you don’t call a child you like Bubby.

Oh here’s what Bubby/Bobby look like, by the way: 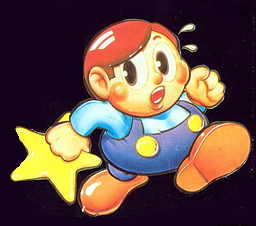 Yeah… he looks pretty lame. I mean he looks kinda like a more well-to-do version of Üter Zörker. My point is, as cool videogame characters go, he isn’t one of them. There’s no official age given for the characters but I’m going to make a stab in the dark and say they’re 10. Now the plot of Bubble Bobble is that Bubby and Bobby’s girlfriends have been kidnapped by “Baron Von Blubba” who has turned the brothers into “Bubble Dragons”.

And then, why would Baron Von Blubba turn them into Bubble Dragons? Bubble Dragons seem to give the kids a huge advantage. If you just kept them as kids they’d probably never make it past the first stage. It’s like if Bowser kidnapped Princess Peach but at the same time gave Mario a Super Fire Flower that made it so he could always shoot fireballs, no matter what. Doesn’t make any sense.

The manual for Bubble Bobble also states that being turned into a Bubble Dragon is a curse. Now if I was a 10-year-old kid and I got turned into a bubble-spitting dragon, I’d probably think that was pretty damn awesome! 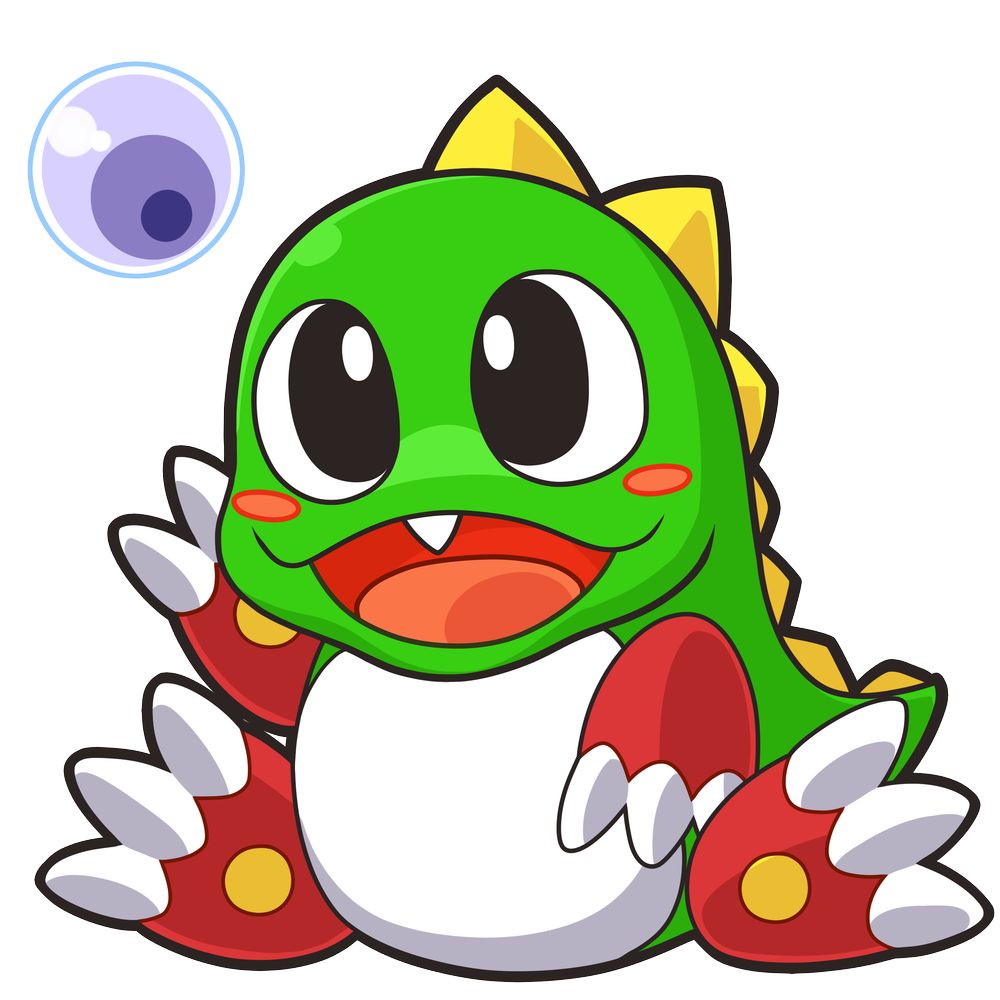 I mean Bub is cute, awesome, and can shoot bubbles. Hell, things are looking good. Who’s Bub you ask? Well, when Bubby and Bobby are “cursed” with being Bubble Dragons, their names change to Bub and Bob. Why? I don’t know. Like, did they come up with this? Did the Baron make them call themselves these names for some reason? Again, it makes no sense at all.

Anyway, that’s the dumb-ass story out the way. So as Bub (formerly Bubby) and Bob (formerly Bobby) you have a great time trapping enemies in bubbles, bursting them and eating the delicious fruit and candy that their bodies leave behind. For 100 levels. One Hundred. Bear in mind, this is an arcade game, so you can’t save your progress and you have to pay to continue. Actually completing this game in an arcade is pretty much impossible. Oh, and the same music plays throughout the whole game. All 100 levels, none-stop, on a loop. Now I love the Bubble Bobble music, but man, that’s a long time spent listening to it.

“But Goemar!” you might say, “The boss music is different!” – and yes, you’d be right. The boss music is different. But as soon as it starts your ears will be begging for the 1014th loop of the original tune, because my god it is awful. It’s super short so it loops a lot and has this awful ear-piercing chime in the background, which serves no purpose except to cause you pain.

Right, anyway, you’re getting close to completing the game. Sadly, after 4 hours, your Player 2 had to go home around level 91 because his ears were bleeding, so you do the last couple of levels alone. Congratulations, you fool you, you missed out on the power of friendship, hahaha! Now all you get it this: 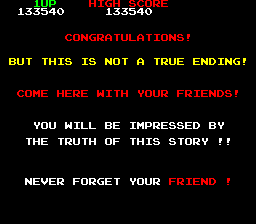 And people thought Ghosts n’ Goblins was bad, making you play through the game twice. Well, times up, the arcade is closed. Looks like you’ll have to go through the whole game again and your ear-bleeding friend will just have to suck it up and stick around for another run.

So, the next day, you do it. You and your buddy get through the whole 100 levels together, like true friends would! 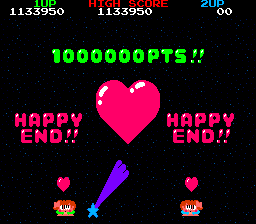 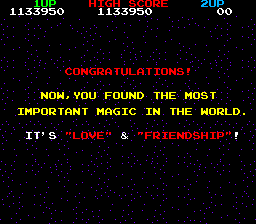 Hell yes! Love and Friendship baby! Feel those feel good vibes! You did it! You and your friend are now closer than ever, you have discovered the most important magic in the world! YES! Good work guys, now just watch the credit scroll and take in those feels. 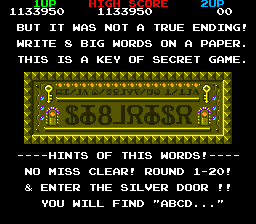 …What? What the hell? Right, so now, you have to play the game AGAIN and get to level 20 without dying and hopefully figure out this code: 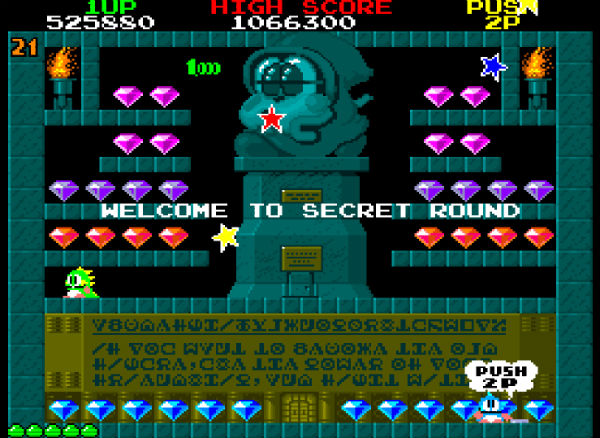 Well… go on then… figure it out… The underlined bit at the bottom of the screen I believe is the alphabet. There’s a message under it. It starts “If you can…” but I have never been bothered to figure out the rest of it. I can’t even find anywhere on the Internet that actually says what the message is. Oddly the $ like symbol you got at the end of the good (but not true) ending isn’t anywhere to be seen. So I have no idea if that’s a letter or not.

There’s a message above that as well, but I have no idea what it is. As far as I know, no-one actually knows what the code says. But we do know that it apparently tells you to press some buttons in a certain order on the title screen to unlock Super Bubble Bobble. Now this code requires you to press the Player Start buttons, so if you have any credits left – I’m not sure it’ll actually work as it would just start the game.

Right so once you figure out the code, die or complete the game again, have no credits left (maybe?) and head back to the title screen, you can then unlock Super Bubble Bobble. Complete all 100 levels again (with a friend, of course) and finally see the true ending. I would give a spoiler alert but there’s no way anyone is ever going to see the true ending normally, so, well, I won’t. 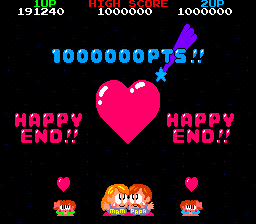 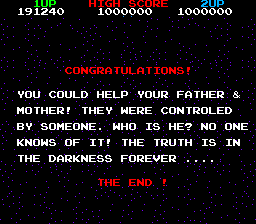 Tah-da! The big Bubble Dragon was OBVIOUSLY your parents, who have also never been mentioned throughout the whole game. Like, you’re never told they are even missing or anything. But well done, you were able to save them! Apparently they were being controlled by “someone”, though what they were made to do we have no idea. Like, if they were the final boss, or even a boss, and forced to fight you, this line would make sense.

So, they were being controlled. To do what we don’t know, constantly cry maybe? Have to listen to the boss music on loop forever? Who knows? Well, whatever, you did it? You completed 320 levels (100 1-player, 100 2-player, 20 for secret code and 100 2-player Super mode) to get this confusing, pointless ending.

You are both the best.

Oh, and then you’re turned back into a lame looking kid, who now shoots rainbows out of his dick…