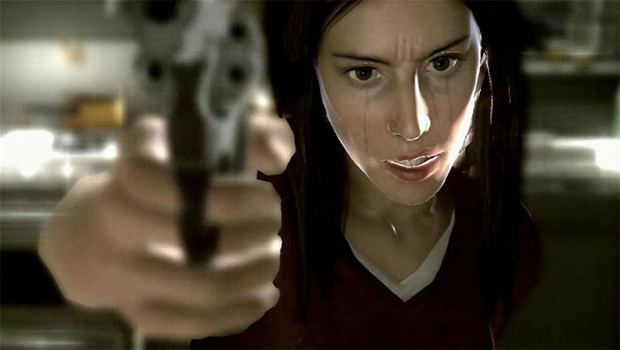 Exploring guns as a narrative device

[Dtoid community blogger RamWar shares his thoughts on the power of the gun in a videogame. Warning: minor spoilers for Heavy Rain, Call of Duty: Modern Warfare, and Metal Gear Solid 3 ahead! Want to see your own words appear on the front page? Go write something! –Mr Andy Dixon]

(Author’s note: this article isn’t about guns from a societal perspective. It’s not about desensitization to violence or any of those topics. Nor is it about gun control or any real life issues. There isn’t anything I can say about those topics that hasn’t been said a hundred times before in better ways by better people. This is about guns from a narrative perspective in videogames.)

Have you ever held a gun? They’re heavy things. You can see a lot of shows and games all about guns and you’d still probably be surprised by the weight of one when you’re actually carrying it. The point I’m trying to make is that while you have a gun, you won’t forget its presence and you won’t forget what it is.

Very few games treat guns with the weight they have in the real world. Every person in the civilized world that uses a gun knows to respect it. Police hope they never have to fire their gun and people in the military are taught strict discipline and maintenance of their rifle. They all know the exact purpose of a gun and the threat it carries with it. Yet most videogames don’t give a gun this weight and thus often lack the impact a gun should have.

This is mostly a problem with the writing and pacing of most games rather than the sound effects and visual effects associated with firing a gun. A lot of research often goes into how a gun should sound when fired and a lot of games do their best to emulate it. The 2006 game Black did its best to make firing a gun impressive and exciting every time. As such it had a fantastic presentation… for the first hour or so. After that the player often stopped being impressed by the game’s visceral presentation. They fired the gun so many times it lost its impact.

Any sort of exciting experience like firing a gun can be likened to volume. The loud moments are the most exciting but you need the quiet moments to make the loud ones that much better. If you keep the volume turned up all the time you go deaf. In scary movies, it gets really quiet right up until the monster jumps out and screams. In most shooters, the sniper rifle is often the most satisfying because of the long, quiet moments that build up to the actual shot. Nearly every time a gun is fired it’s the buildup that makes the gun exciting and that’s something games these days are forgetting.

There’s a dramatic principle called “Chekhov’s Gun”; it’s the idea that if you show a gun in a scene, it will be fired later. The idea has since been used to refer to anything that is shown and will have a purpose later on, but for this article’s sake we’ll take it pretty literally. The writing reason for this concept is a metaphor about not including useless information but it’s also something different to the viewer/player/reader. When you see a gun in a scene, that’s a promise that the gun will go off at some point. If there is a gun in a scene it completely changes the dynamic of that scene. How many times have you seen two characters wrestle while one of them has a gun? You know how that ends. How often do you see somebody handed a gun and pray they never have to use it? You know they’re at maximum twenty minutes from firing the thing. A gun in a scene is almost always a promise that somebody isn’t going to make it. The tension comes from the fact that you’re never quite sure who’s going to die; you just know that somebody will.

What are some of your favorite moments in games that include a gun? Nine times out of ten that moment is great because of the buildup. There’s that fantastic scene in Heavy Rain where you’re given a gun and a man to kill or else your son will die. How many of you made it to the climax of the scene, where the man is kneeling on the ground, showing you a picture of his daughters while you have a gun to his head? I bet most people hesitated. I know I did. I know my friends did. It’s all because that scene gave the gun the proper weight.

What about the scene in Metal Gear Solid 3 where you have to kill the boss? You spend the entire game being told you’re going to have to kill her, that’s the buildup. Finally you defeat her in a fist fight and you have to shoot her in the head as she lies on the ground.

This idea of building up the moment a gun goes off can be found everywhere, whether it’s in classic movies or recent videogames. Episode 3 of Telltale’s The Walking Dead game has several gunshots and every single one is terrifying. I’ll try not to spoil anything about the episode because it’s still fairly recent and is really something that should be played without any spoilers whatsoever. Everyone that’s played the game knows what scenes I’m talking about. Every gunshot in the episode has a buildup, even if you don’t know that the gun being fired is actually what will result from the buildup.

The Call of Duty series and the whole recent slew of shooting games in general aren’t too great at this idea of the tension a gun should give. The entire game revolves around shooting things, and, like I said earlier, keeping the volume high all the time will just render you deaf. Still, the most exciting moments in the game come from the time just before the gun is fired. Whether it’s seeing the war torn city you’re about to be dropped in just as the mission starts, or the moment you’re breaching a cabin hoping to find a villain inside.

Then there’s the first scene in Modern Warfare. The scene that reminds you what a gun is and gives the weapon its justly deserved weight before the rest of the game steals it away. Your own execution.

I’m not saying that every time you want to fire a gun in a videogame it should have the consequences and tension that it does in real life. Just like when you kill someone in a game you don’t want to hear about how they had three kids they were trying to feed by working for a mercenary group. A huge point of games is to escape. That’s most of the fun of Grand Theft Auto; you can pick up a gun and fire it with reckless abandon without the terrible consequences it would have in real life.

No, the point of this article is to remind people what an amazing tool a gun can be for your narrative… but only if treated with the weight it deserves. To constantly portray guns as this totally awesome thing that fixes every problem devalues the entire concept of a weapon, just isn’t true, and has some pretty terrible implications.

So what do you think? What moments in games have you actually been worried about a gun in the scene? What examples can you think of that feature a gun used to great effect or very poor effect?