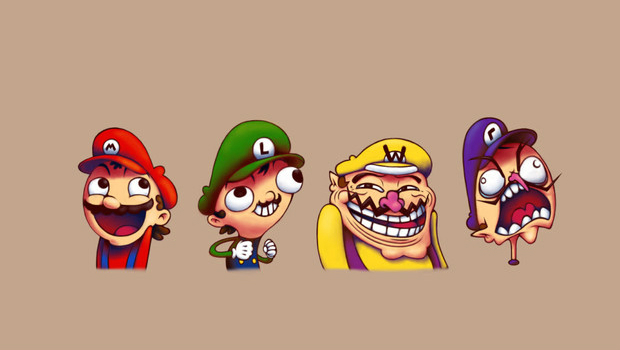 [Appropriately-named Dtoid community blogger TheManchild shares a story of innocence and… well, stupidity. Kids, ya know? Want to see your own words appear on the front page? Go write something! –Mr Andy Dixon]

There are no stupid quests; just stupid people.

My daughter got her foot caught under her toybox the other day. She looked at me and started to whine, so I walked over to her, lifted the toybox up, and pulled her foot out. Suddenly she became obsessed with the idea that she could, by her own will, get her foot stuck under the toybox whenever she wanted to. So the rest of the day, her one and only mission in life seemed to be getting her foot purposely stuck and having me fix it for her, which was always followed by an appreciative smile.

The fatherly part of me thought, “Aww, how cute. She is just doing it to get attention or whatever. Heartwarming.”

The rational part of me thought, “Man, what an idiot.”

The point is, children are stupid. It isn’t their fault; they have tiny little brains whose functions are largely concerned with eating and pooping, and there isn’t much room for anything else in between. They are amazing at the same time because of how fast they learn, but they are stubborn in their learning. It’s not enough to just discover something; they need to repeat it repetitiously, over and over again, until they are absolutely sure they have exhausted every last ounce of entertainment value out of it. Even if it is bad for them, like getting their foot wedged under a toybox.

If I didn’t happen to be around to help her, she would have had it there for like, a week, and starved. The intelligence of an animal is usually defined by its ability to survive, and my daughter’s survival skills are at a level of competency somewhere between a potato and a length of video cable.

But when I think of it, I was pretty dumb when I was a kid, too.

When the N64 came out, I was amazed, mostly because of a Nintendo Power promotional video where three “pro gamers” showed up at Nintendo headquarters in limousines accompanied by hot ass women to play three games for the upcoming console: Mario 64, Pilotwings, and the clunkiest game in history, Star Wars: Shadows of the Empire.

The video was about twelve minutes long, and it showcased the features of each. It talked a lot about 360 degree movement, because that was apparently revolutionary even though the PlayStation was out and kicking ass a year before Nintendo’s impressive, yet comparatively archaic, cartridge-based affair. Still, I was convinced that I wanted an N64 more than a PlayStation — by my mother who said I wasn’t allowed to have a PlayStation because it used CDs which were more easily damaged — and so I saved my money up for months, raking leaves for the neighborhood, and tried my best to scrape up enough coin to afford the great Nintendo machine.

This was all immediately ruined when, at Christmas time, right before I was about to go and spend my very hard-earned money, my parents just said “fuck it” and bought me one anyways. It taught me that money is valueless, which I still hold to be true to this day. That is why I am currently bidding on eBay for a yacht in the Bahamas, where I never plan to go because plane rides scare me.

I got the system and a couple of games, and one of them was Mario 64. I played the motherfucking shit out of it, brought it to friends’ houses to take turns, and had a lot of fun just running around in 3D. Before long I beat it, and sometime after that, we moved into a new house my dad had renovated, and he signed us up for dial-up internet.

It was the most glorious thing to ever happen in my entire life, and what led me here to waste my time today.

I spent most of my time on Westwood Chat, a chat service brought to you by the same folks who made Command & Conquer. I learned about cybersex when several forty-year-old men tried to have it with me; there was no Chris Hansen around to save me from their advances. And eventually, I figured out that you could go on your web browser, jump to www.Lycos.com, and after ten minutes of loading, punch in the name of your favorite videogame. I discovered IGN64, and eventually, dozens of fansites talking about my favorite games.

One of them mentioned Mario 64, and made an offhanded remark about it that would change the weeks to come. It proclaimed that there may be a way to unlock Luigi in the game as a second playable character, and that the addition of Luigi would allow for co-operative gameplay. It offered a screenshot of this, and no additional information.

I immediately called my cousins over. We had always been very close; we lived together years back for some time, and in our old house in the town where we were currently living, we had been neighbors most of the time. We started gushing about all the possibilities of playing a two player Mario 64; well, I guess there was only one. We would be playing Mario 64 with two people, at the same time, but that was sweet enough. Looking back, the logistics of such a thing don’t make sense. With a camera wildly swinging around and a 3rd person view most of the time, Mario 64 with same-screen multiplayer would have been a fucking catastrophe. Also, if Luigi was a hidden feature of the game, and there was some kind of two-player element, why in the name of buttfuck would Nintendo choose to keep that a secret? The greatest secret ever kept in videogame history?

Well, we decided they had, because, you know…stupid. So we spent several hours a day, every day for like a month, trying to find Luigi in Mario 64. We looked up cheats constantly on the internet, and this little hoax had produced hundreds of them. I distinctly remember some of the funnier joke ones which revolved around “Beavo the Cougar” and giving him his testicles back or something to that effect. Pretty soon, we were becoming disenchanted, until we ran across one that actually worked.

Well, sort of. Basically, if you did something or other, ran upstairs to a door, immediately came back out, and went into the snow level room, you would hear the Boo in the lower hallway make a noise, and disappear. After that, you’d have to find a way to glitch your way into the wall. You could see Boo sitting there in the middle of nowhere, and if you made it inside, and talked to him, you could finally get Luigi.

Of course, there was no way for us to get inside that wall. It wasn’t happening, period, because it just wasn’t fucking meant too. But we tried anyways, for days. We were determined. The Great Quest of Stupid was well under way, and we were pioneers in a world of futile busywork.

That was the closest we ever got to getting a single code to work, with the second closest being working your way up a lava fall inside a volcano. At the top, you were supposed to see a ledge, and there would be a cave there where Luigi was hiding. While we all swore we saw a ledge, we determined it was impossible to get up there. Not that Luigi wasn’t there; he was, according to us. We just weren’t bad ass enough to do it. And clearly, not smart enough to realize that the whole thing was fucking bullshit, a fabrication meant to ruin the lives of dumb ten-year-olds everywhere.

Nowadays, people just ROM hack the shit out of these things to find secrets hidden within. But we don’t even need to go that far; Shigeru Miyamoto himself confirmed that Luigi, although originally implemented in the game as part of testing, is not in the game, period. No shit. And even when he finally did appear in the DS version of the game, along with like nine other characters, nobody really cared. At least, I didn’t. Even if we had managed to find him, even if the rumors had been true, it wouldn’t have mattered. We would have been bored with the bastard in about ten minutes anyways.

Nevertheless, it was a fun and memorable couple of months of pointless effort that reminds me of a different time, when secrets were still secrets, when cheats were brought down from gaming Heaven by the Game Genie, and when a bunch of dumb kids could be convinced by a Geocities page that one of the greatest secrets in gaming history was kept such a huge secret that only the genius minds behind Yahoo Web Page Builder sites had discovered them.

I swore after that I would never be stupid enough to believe any rumor like that ever again.

TheManchild
I am an aging man with starving children. I write blogs about video games. My favorite system is the Game Boy.