[Dtoid Community Blogger Stevil gets the “bad” ending in videogames AND in life. Do not date this man! Want to see your own words appear on the front page? Get writing! –Mr Andy Dixon]

WARNING: Spoilers for Catherine below!

After defying the Gods, and in the process, becoming the fabled “Man of Legends”, Vincent Brooks deserved a break. Yet, as Katherine walked out the door, he fell at the final hurdle in a fumble of hollow promises. Their relationship was never meant to last.

There and then, the achievement for being a Bad Lover popped up. My other half looked at me and said, “That ending is you, all over.”

Instead of telling her to pack her bags, I agreed. For that, Catherine’s Nighty Night conclusion was one of the most satisfying in a long while; one formed out of my own brutal honesty.

Catherine might be a subjectively frustrating puzzle game, but at its heart, the real test comes from how you deal with a hypothetical relationship, and its subsequent affair. It starts off innocuous, before spiralling into a deeply personal territory. The average player can easily go for the gold, with simple character acting.

Though, by doing so, their answers are somewhat untrue. By using past experiences, and applying them to the narrative’s situations, honest answers reap the reward of an honest ending. Answering truthfully, in front of your partner, also helps you see Vincent’s predicament from a more intimate perspective. 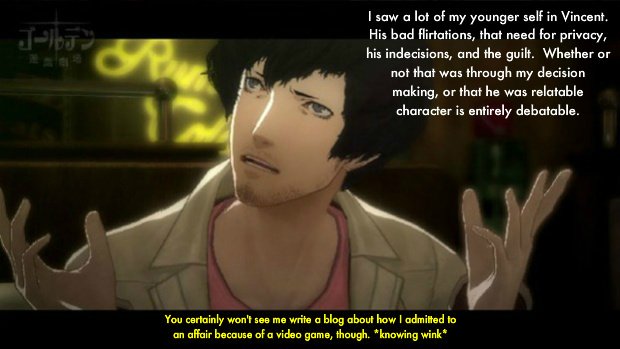 In this case, “Bad” is doesn’t have a negative connotation. It’s merely a reflection of your personality. There’s an irony to Catherine’s “true” endings; you have to play to the story’s conditions, with outside knowledge, rather than discovering them on your own terms.

The problem with multiple endings is we expect key moments to affect plotlines in an obvious manner. They’re dictated, full of forced morality by developers that, by rights, have no place to judge. Few titles manage to avoid this scenario through neutrality.

Silent Hill 2 played every card to its chest, and every checklist was malleable. Each conclusion was unforeseeable. The “Leave” ending was handed out to the cautious types, whilst the reckless were given “In Water”. As such, the unknowing progressions were given reflective endings.

In stark contrast, Silent Hill: Shattered Memories admitted you were under psychological evaluation from the start. That warning lay in the subconscious, influencing even the most innocent of indiscretions. Still, Shattered Memories got around such difficulties by reminding you of a narrative goal: to put yourself in the shoes of a desperate father. 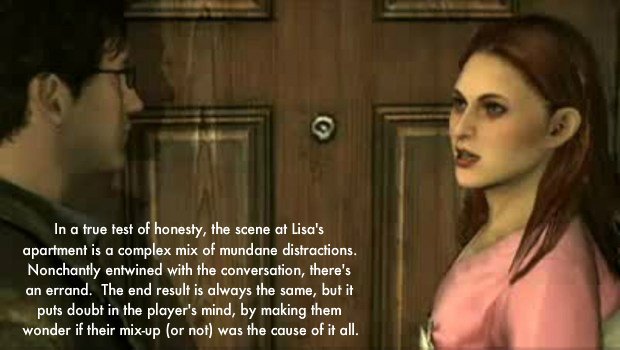 Videogames tend to let you escape into a role of the hero. Developers are bound by that simple fact, thus stories are about epic quests. Honesty is hardly the best policy when you’re involved in intergalactic war, or having to slay giant beasts for a dead loved one.

When a game doesn’t deal with heroics, it usually deals with personal struggles, and thus, should treat the player with respect. Catherine has a neutral stance on morality, knowing that you’re playing a videogame where the goal is to win. It goads you into choosing reflective decisions by showing the answers of other players, with the graphs revealing some unexpected percentages. A brilliant idea in steering the audience away from treating the non-puzzle segments as another “game”. 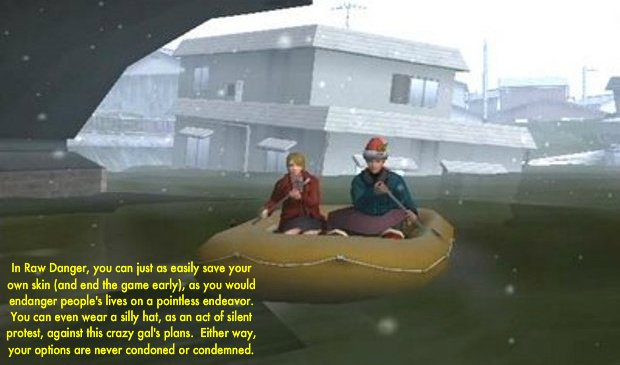 Despite the unique online consensus, Catherine shares the same kind of intimacy as Fallout: New Vegas, Way of the Samurai, Steambot Chronicles, and the Zettai Zetsumei Toshi series. They’re all about personal struggles, with most choices allowing a completely new direction to accompany different consciences. Every action has a consequence, but they also lack an imposed judgement.

In essence, that’s true freedom, true honesty, and for those who control their destiny within the illusionary confines of a pre-set narrative, wholly satisfying.

The downside to an honest heart is the disposability of the initial attempt. 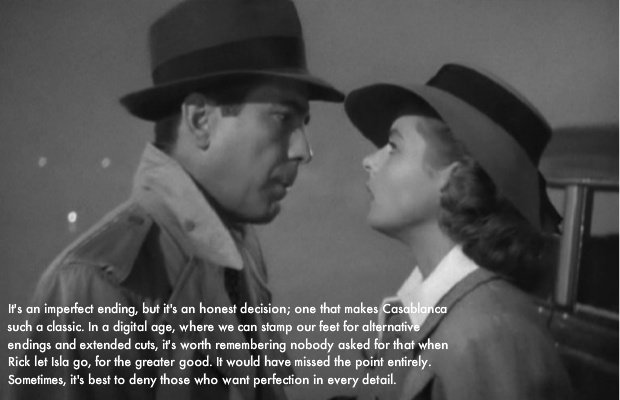 The intensity of each personalised decision is diluted with every subsequent replay. The player knows how to tackle every obstacle with perfect efficiency, and thus, circumvent their previous errors. Everything is an afterthought towards new goals, outside of the narrative. As such, Catherine suffers from its multiple endings, text messages, and achievements.

Currently, I’m on a second run of Catherine, giving Katherine and Catherine the answers they need to hear. For Vincent, it’s another run of nightmares. For me, it’s just a dream run — a dishonest ending for a dishonest heart.