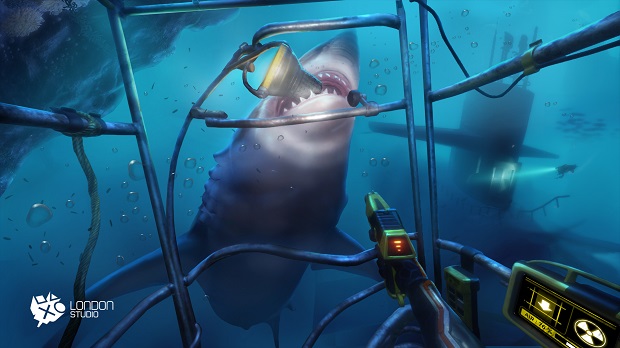 As the virtual reality races wages on, different prototypes keep coming out for Project Morpheus and Oculus Rift. I had yet another chance to play two new titles on Project Morpheus at Tokyo Game Show. While they were certainly unique in their own right, it’s tough not to feel as if Oculus is a bit ahead of Sony’s project.

The first game that we played was The Deep – a shark attack simulator. Ascending from the depths of the ocean in a deep sea cage, I had a first-person view of an angry shark as he tried relentlessly to rip the vessel apart and feast. I’m sure I’m delicious, but I didn’t want it to find out.

I was equipped with a gun that fired flare-like projectiles, which could be aimed based on the positioning of the DualShock 4. Unfortunately, I don’t think these shots were actually effective in any way, and were only included to make the experience interactive. Still, it was fairly incredible to watch the shark lurk, circling the cage and slowly ripping it apart.

By the end of the ride, I made it to the surface intact. The finale held one last, grand attack in which I was sure the demo would end grimly. It didn’t, as the shark gave up and went back to the deep unknown to terrorize other unlucky creatures.

The second game took the VR experience from the ocean to the sky. War Thunder, in this capacity, is a flight simulator that’s been optimized to work with two impressive controls – a pilot’s stick and a large throttle.

Tasked only with flying past checkpoints that were marked by blue smoke, I slowly but surely weaved around mountains and hit them all in order. There were other planes firing bullets, but they never hit me, and I never really saw them. Maybe that’ll be fleshed out more if the project is eventually developed as a full game, but it served no real purpose for this demo.

Judging by these two demos, it seems as if Project Morpheus just isn’t at the point that Oculus Rift is yet. There’s still a considerable amount of screen blurring when moving your head – something that sticks out like a sore thumb when you see it first-hand. Additionally, the resolution didn’t look as sharp as the titles I’ve played on Oculus.

However, it almost feels like a shame to have to make comparisons. Virtual reality experiences continue to be incredible each and every time, no matter what game is on display. These two were no exception. Project Morpheus may not be as far along as its competition yet, but it’ll get there eventually. And, when it does, everyone will win.