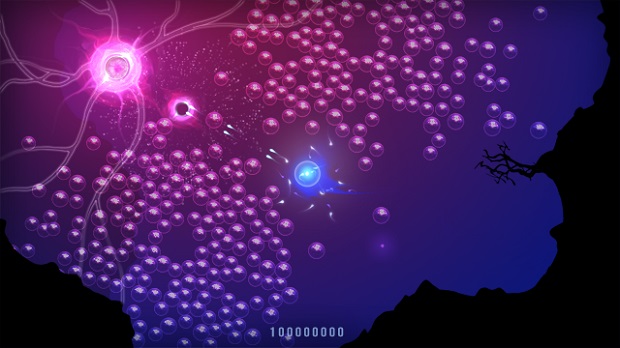 Imagine playing a game like Geometry Wars from a first-person perspective through the magic of Oculus Rift. All the colors, all the frantic action, everything that makes it such a cathartic experience, but from a more immersive viewpoint. That’s something that sounds pretty interesting, right?

Well, that’s what Land Ho Co., developer of Crimson Dragon, has going on with Project Life, in a way. The immediate differences are that it doesn’t take place within a confined area, and the gameplay is a bit slower, but other than that, it’s easy to draw comparisons.

The premise of Project Life is that you control a healthy cell as it tries to rid the area of poisonous cells. The path that you can operate along is a clear blue color, and the enemies are within purplish-black areas. As you eliminate enemies, the poisonous bits turn to healthy ones, opening up more space to move around within and to continue the game. All of this is accomplished via a twin-stick shooter mechanic. The face buttons can be used to vary the types of attacks, but regardless, the method stays the same.

Of course, the thing that makes Project Life look particularly promising is the Oculus Rift support. The game can be played without it, from a top-down view, and that’s fun in its own right. However, the virtual reality component gives it that extra oomph to make Project Life a candidate to stick out once the Oculus Rift is more widely adopted. Not too shabby for a game that’s been on the studio’s backburner since 2012.