Rendered with the Unreal 4 engine, every single frame of this trailer looks absolutely stunning. As a niche genre, I’m used to mech games looking a little rough around the edges, but Project HON is bringing the visual splendor to the giant robot arena.

As excited as I am though, there are plenty of questions remaining about what exactly Project HON is. Various sources describe it as an MMO (which would make sense for a game being developed by NCSoft), an action game with RPG elements (which is what it actually looks like), and a mobile title (wha?)

The trailer, for as dope as everything looks, also adds to the confusion by seeming to demonstrate three very different games. 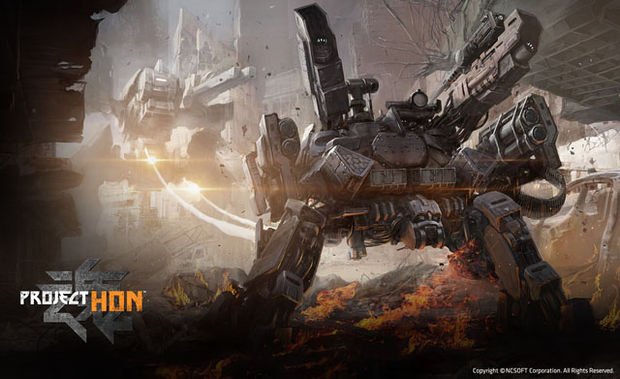 The first segment looks like a single-player third-person action game with all the usual standards; walking around with a group of NPCs, blowing up enemies, and scripted action sequences between firefights. Sounds like a fun time to me.

But then the second part of the trailer switches gears, showing off a number of different types of mecha slugging it out in what seems like a class-based multiplayer segment. The action climaxes with a RIDICULOUS battle between two gigantic robots (piloted by smaller mechs no less). Very cool, but that last fight seems especially scripted, maybe like a QTE face off between two players? Not exactly sure how that is all supposed to work.

But the LAST part of this 25-minute-long opus of a trailer throws a big curve-ball, panning out from the action to reveal is being played on mobile devices. Uh oh. There are troop icons, what seems to be unit costs (oh god, the freemium hooks), and drag-and-drop mechanics to air-lift giant mechs into the fray. So was everything shown before a fugazi? Or are you expected to boost around and try and shoot things with a touch interface?

Well, maybe, maybe not. The very last scene also shows an Occulus Rift, so presumably it WILL be a PC action game after all? Is the mobile stuff some kind of secondary app? Who the heck knows. I’m a huge mech nut, so I’ll be keeping a close eye on Project HON. Hopefully we’ll get some kind of information soon and the game will be just as cool as it looks like it could be, and not a miserable phone-based F2P experience.