This is my second autumn with no classes to attend, no textbooks to buy, no desperate claws through books I should have read last night, but didn’t. Even though “school” doesn’t theme my life the way it used to, I’ve always soothed myself with school-centered art, and I find that even after my last graduation, I haven’t lost my taste for it.

Admittedly, I tend to stick to the maybe more traditional modes of processing the moody, murky ennui of school, like campus novels (Idiot by Elif Batuman is a new one I like a lot), high school coming-of-age films (Heathers, Easy A, John Tucker Must Die… need I go on…), and decidedly college radio (anything that uses this pedal reminds me of inhaling stinking river water by the frat houses) than campus or high school centered video games. But I think playing them provides a similar experience to these other types of art, maybe at an even more visceral level. You get to process the precariousness of young adulthood in real time while something like a movie or a book asks you to be more passive, meditative.

It is disappointing, however, that school-centered games often put girls in boxes more than their out-of-genre counterparts do. Take a game like Lollipop Chainsaw, for example, where you play as zombie-killing Juliet Starling, cheerleader and teen boyfriend protector. Much like Jennifer’s Body, the movie where Megan Fox walks high school’s halls as a literal man-eating demon, or Buffy the Vampire Slayer, the beloved TV show with its own issues, Lollipop Chainsaw is an unsubtle finger jab toward high school being a lot like hell. In this high school hell, popular teen girls are the only people cute and cool enough to make it through unscathed. To be clear, I love Lollipop Chainsaw. It’s like a neon fast-food sign. It’s ridiculous, excessive, attractively subversive. But I could never make myself feel comfortable with the fact that unlike a real, adult actress cast in a high school movie, the character Juliet is, in her entirety, a teen cheerleader that is featured in a lot of underwear shots. That is really weird. That is “not a vibe,” especially in a genre that has such an aggressive history of sexualizing young women.

That idea carries onto other popular school games, like Persona 5, where the teen girl character faints ass up in battle, or the unfortunate Yandere Simulator, the game that lets you become a murderous, boy-obsessed school girl. Sidenote: can’t we have school games where the girl isn’t bound by a tiny miniskirt and knee highs? Don’t these schools have dress codes?

Of course, some school-centered games dare to go beyond the murderous, sexy child trope. How brave! There’s the upcoming Two Point Campus, the forthcoming college sim where all humans have a sexless, cucumber vibe, or the cinematic Life is Strange: Before the Storm, which has a 13-year-old character, so, like, thank God. And sure, things like Buffy or the manic pixies of John Green’s universe are no angels either, reducing a complicated young woman’s world to something flat and moralistic.

But the unique problem of video games is how short its history is. That repeated Lollipop Chainsaw panty shot feels a lot worse when there’s no alternative. Instead of John Green, I can just read the thoughtful and painful Wintergirls. If I’m tired of Joss Whedon’s shit, why not just watch The Chilling Adventures of Sabrina?

This lack of choice, I think, is something both within and out of our control as consumers. School girls in video games have become such a meme-able but real beauty standard for gaming as a subculture. Public-facing women with gamer audiences have even edited themselves to look younger or like teenagers. There needs to be more responsible depictions of young women in games because… sexualizing teens is weird… and wrong! Of course, Lollipop Chainsaw isn’t single-handedly responsible for video games’ pedophilic tendencies, but it certainly doesn’t help, no matter how tongue-in-cheek it presents itself to be. 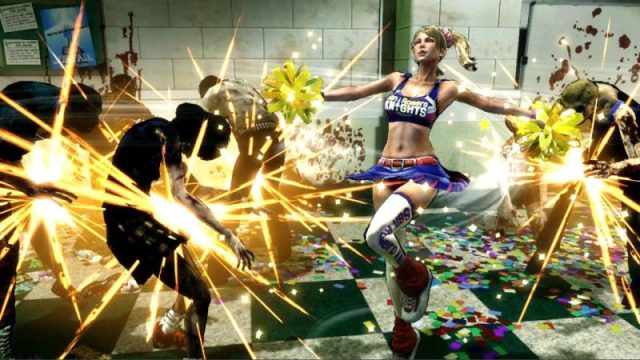 For girls like me, it can prevent games from being a fun and fantastical way to explore my identity, my age, my uncertainty. Instead of those things, which other art forms allow for, we’re forced to stare at a regurgitated girl, an image of what older men want us to be or wish we were. Pretty gross and not fun.

And I can appreciate that not everyone cares about campus-centered media as much as I do. You might not care about how girls are depicted in it or at all, for that matter. That’s all right. Imagine you’re back in college, sitting at one of those wobbly light wood desks. It’s September, and you can smell the air from the cracked window deepening into fall. As your college professor might say after a particularly heated classroom discussion — it’s all just something to consider.