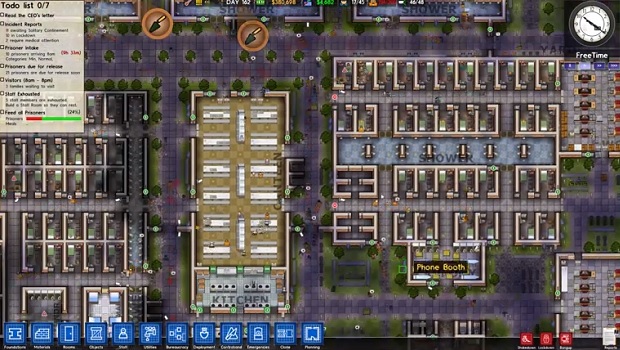 Prison Architect was one of the first games to appear on Steam’s Early Access category and I think it’s the game that’s been best suited for the service. There’s been a steady stream of updates since April and Alpha 15 is one of the best so far. There’s been a big improvement in the performance of the game, specifically when it’s a large map with a lot of prisoners present. I’ve not created a really big map so far so I can’t say I’ve seen Prison Architect running slowly but this is a welcome update nonetheless in case I fancy running a really big prison.

Some neat additions are that your all your prison staff will now suffer from fatigue, so you’ll need to built a staff room so your guards and workers can recharge their batteries. Of course, it’s not like I need an excuse to put a pool room in a prison because that’s only going to lead to those pool cues being stolen and used a weapons by resourceful prisoners.

Also added is the ability to speed up the game to a crazy speed, new ways to track contraband and new grants to improve your income. The big feature that’s been added in Alpha 15 is a new way to support mods making it easier for user created add-ons to be used in game. No more altering text files, just drag and drop the mods into the relevant folder and you’re good. I’m glad to see Prison Architect getting better and better; as I’ve mentioned before, there’s a perverse glee to be had in making your prison-less-than secure. There’s comedygold in that approach that offsets the dark thoughts that come with running a prison.