In charge of an empty, rundown prison

I’ve been designing some prisons recently. Well, I can scratch another item of my list of sentences I never expected to utter. I’ve been running them, too. Actually, facilitating the running of them, more often than not. I suspect that actual prison architects have a lot less hands-on time with functioning penitentiaries, but I don’t know any to ask.

I’m not sure why, but I thought it might be a good laugh, this whole Prison Architect lark. It’s probably rather telling about my lack of experience with the prison system that I actually expected whimsy. I feel a bit foolish now. Like someone drinking toilet wine. 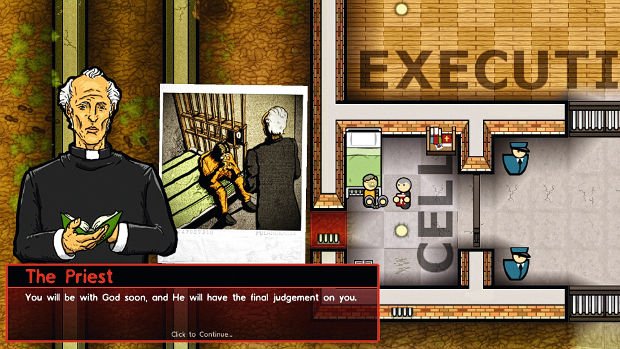 I started my first day of work with the best of intentions. I’m going to make the best darned prison in all the land, I thought to myself. I was looking forward to getting stuck in. Contrary to my real-life proclivities, I’m rather fond of management, and, indeed, micro-management in these here videogames. It is, as they say, my bag.

I had buckets of cash, a huge plot of land, and eight inmates arriving in a day. Luckily, construction workers are rather diligent in Prison Architect, so that left me with more than enough time to create the bare essentials.

In a letter from some Prison CEO chap — he had a mustache and thus appeared legit — I was advised to construct a large communal holding cell instead of individual cells. The goal was to save money and time as I was just starting up. Sound advice, I thought, and I took it to heart. I was quite literally whistling as I worked, and things were coming together rather nicely.

I built the walls (always a good place to begin), then assigned a room (my first holding cell), and added in some final, but necessary, touches, like beds and loos. I didn’t want the prisoners crapping on the floor, after all. I had some space left over, so I built some showers at the end of the block. I was going for an en-suite feel, but it ended up being a little less luxurious, with all these facilities crammed into a small block. 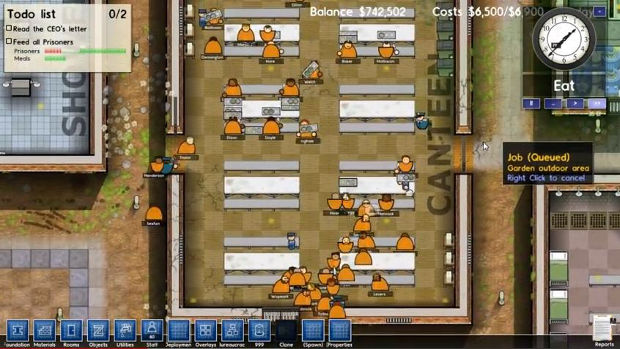 I didn’t want the prisoners to starve, so I constructed a canteen, and of course that meant I also had to build a kitchen, and each of those rooms needed the relevant objects like tables, service areas, an oven, a fridge — it was a long list. Things were starting to come together nicely, but I was becoming increasingly aware that the arrival of my first inmates was sneaking up on me.

All of these facilities were effectively useless without water and power, so I built yet another room to house my utilities. After another job well done, I perused my burgeoning jail, but something was amiss. I still didn’t have power or water. Of course this was entirely my fault, as I still needed to hook everything up to the electricity and water mains.

The whole time, my stocky construction worker chums were running around, grabbing supplies from the depot, hammering away at walls, screwing in light bulbs, carrying toilets and beds, and generally doing a really good job. They worked hard and never complained. I like to think that during their lunch break they told bawdy jokes, read The Sun, and told each other that despite my crisp, immaculate suit and perfectly coiffed hair, I wasn’t such a bad bloke.

Building one thing invariably leads to the construction or addition of something else. Even though my inmates had yet to arrive, I was already attempting to anticipate their routine and their needs. Routine is important in Prison Architect, as the convicts are kept to a pretty tight schedule, everything happening at the same time every single day. With that in mind I tried to build my prison in a logical manner, taking into account in which order they would use each facility. One can even place different materials on the ground to speed up or slow down foot traffic, manipulating the movements of staff and felons to a significant degree. 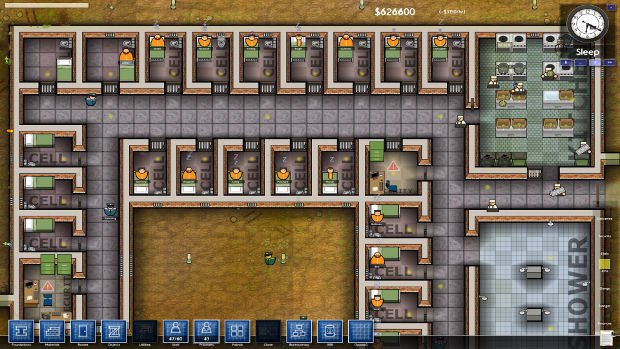 One couldn’t exactly call my prison finished, lacking administrative buildings, communal areas, or any medical facilities, but it was good enough to open. I quickly added a fenced in yard with some weights and even telephones just before the prisoners arrived. I was feeling confident nothing would go wrong. I may have been running low on funds, but government grants were on their way. When the gates finally opened and my recently hired guards started to bring in the first batch of “residents,” things changed immediately.

I saw my prison in a new light. It was covered in muck and filth, cracks cobwebbed throughout the buildings, green slime clung to the surface of the shower area — it was generally disgusting. I had no money or time to hire maintenance workers or janitors, so the prisoners would have to make do. They weren’t too happy about this.

My biggest mistake was not paying enough attention. I had set up metal detectors at all entrances, ensuring that no shivs or deadly spoons would end up stuck in backs or guts, but I confess that I just sort of forgot all about them. When an armed prisoner walks through one, it makes a wee beep, but it was up to me to find the fella and have a guard search him. That was where I dropped the ball.

I also hadn’t taken into account that, while many of the doors could only be accessed by staff, prisoners could slip through right after them, just before the door closed. These two oversights led to my peaceful little prison becoming Hell on Earth. 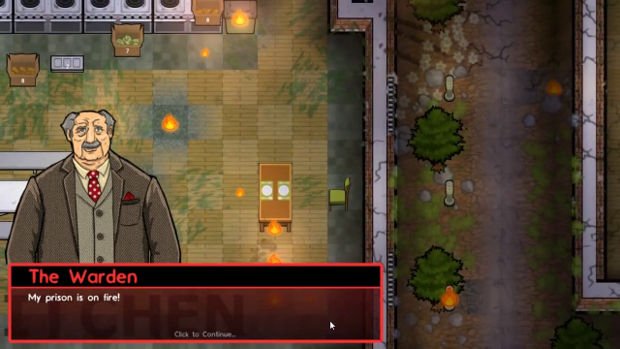 It all started during lunch. There wasn’t enough food to go around, so my new jailbirds started to get antsy. Antsy and armed is a dangerous combination. The first victim was one of my construction buddies, just minding his own business, carrying a box of light fixtures. He got stabbed in the stomach and fell to the ground. There were no guards to come to his rescue, as a small riot had broken out in the holding cell. Two of my guards were defending themselves against six prisoners, while the other was off in the canteen beating the crap out of a skinny, bespectacled con. I”m not sure what he had done.

Within mere minutes, the injured and dead lay everywhere. One cook lay bleeding next to the oven, the other was limping to the front gate. My last active guard was being savagely attacked by a small group of prisoners, and all of my construction workers were freaking the hell out. That’s when I noticed that I couldn’t see many orange jump suits. Most of the inmates had followed a fleeing construction worker out of the locked side entrance, and were now almost at the edge of the map. And then they were gone.

In less than half a day, I’d witnessed murder, beatings, and at least six criminals escaping. My warden had locked himself inside the office I had just built before lunch, and may have been crying. It was a hell of a first day on the job.

Despite the tutorial, I wasn’t really prepared for this. It teaches players how to use the basic tools, but doesn’t really throw any curve-balls at you. Considering that Prison Architect is still in alpha, I’m surprised it has a tutorial at all, to be honest. My first, terrible failure taught me a lot more, however, and I was on the ball the next time — or at least I didn’t end up having everyone die or escape on my watch in a matter of minutes. I took grants for missions so I had more cash to fully kit out the facility, I halted the introduction of inmates until it was all built, and I hired three times as many guards. I’d become a little paranoid, but it paid off.

Even at this early stage, with features still to be implemented and some only half finished, Prison Architect seems rather content rich. It has a research tree which can be used to unlock new staff members and extra rooms (allowing players to implement such things as CCTV or hire accountants), and while the only mode available is strictly sandbox, there are plenty of clear objectives which help to drive the game forward and inspire the construction of new rooms and general expansion. 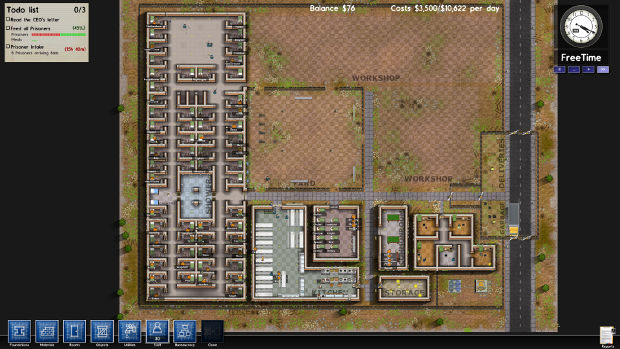 Most impressive was the way it had me getting wrapped up in moral quandaries without being too heavy handed. The tutorial has a narrative about a murderer on death row, and there’s some dialogue between a preacher and a guard that might be a little on the nose, though more than anything, I found the whole scenario rather disturbing, as I was tasked with sending a man to his death for a crime I was forced to witness via static, hand-drawn images — quite graphic images, honestly. It was unexpected, but really set the scene.

The sandbox mode is not as direct, but I still found myself questioning my actions. It’s even easier to dehumanize criminals in a videogame than it is in real life, and there’s no doubt about it — I was doing that. But stepping back for a moment, I found myself a little bit horrified with myself. My treatment of the prisoners was defined by my budget, and I only really cared about their well-being if it meant they weren’t going to start a riot.

It may “only be a game,” but it attempts to simulate real scenarios and possibly even inspire attitudes in its players that are shared by those who actually run these large, privatized penitentiaries in the US, and, indeed, the UK. It’s a bit chilling.

Introversion make fascinating games as rule, and I think that Prison Architect has the potential to be their most compelling experience to date. It’s still got a long way to go, however, but it definitely feels like it’s on the right track.