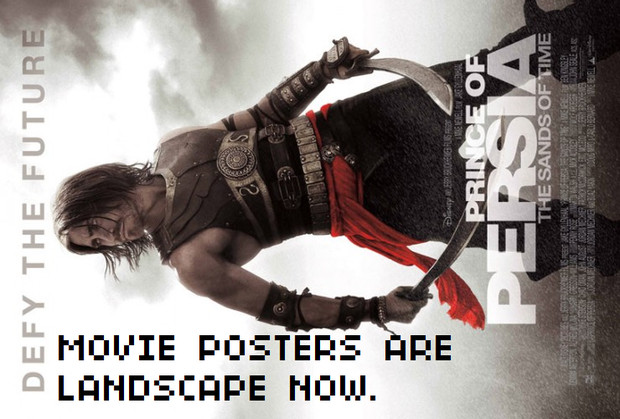 On Tuesday, I traveled out to Jerry Bruckheimer Productions in Santa Monica to check out the trailer for the upcoming Prince of Persia film adaptation. In case you haven’t been keeping up with it, the movie is based on the Sands of Time trilogy, and it features the famous gay cowboy Jake Gyllenhaal as the titular prince.

The movie announcement was met with indifference from the cynical denizens of the Internet, for a number of reasons. Historically, video game movies have rubbed gamers the wrong way, either due to excessive deviation from the source material or simple lack of production standards (or sometimes both). So I walked into the private screening room as a bit of a skeptic myself.

Hit the jump for some thoughts and details on the trailer for Prince of Persia: The Sands of Time.

The opening shot stuck in my mind pretty clearly, but perhaps for an unintended reason. It showed Gyllenhaal standing at the end of a wood outcropping on the roof of a building, which reminded me more of Assassin’s Creed than Prince of Persia. Of course, Assassin’s Creed borrowed a lot of gameplay cues from the Prince of Persia games, so it is a bit of a moot point.

As a fan of the ridiculous acrobatics in the games, one of the aspects I was specifically watching for in the trailer was the stuntwork. As expected, the action is heavy on the CG, but as a result the free running in the trailer is as unbelievable as in the games, if not more so. Some specific moves shown off in the trailer will be familiar to fans of the games, while others are so fantastic that a game would be hard pressed to replicate them outside of a cut-scene or quick time event. Suffice it to say that I was pleased with the quality and density of acrobatic stunts in the trailer, and I hope that the movie maintains both.

As far as combat, there is not much to say. Much like combat took a backseat in The Sands of Time videogame, it wasn’t featured particularly prominently in the movie trailer. I can say that bows and arrows are confirmed, as is at least one swordfight. At least!

What dominated the trailer, however, was the newly scripted story, which borrows elements from The Sands of Time trilogy (most obviously, the Dagger of Time), but otherwise introduces a new prince, a new female lead, and an original plot. The trailer naturally spoils very little of the film, but it showed enough to be clear that it won’t simply be a silver screen retelling of the videogames.

After watching the trailer, several other members of the gaming press seemed fairly excited for it. Rightfully so, as it does everything a good action movie trailer should — it features fantastic locations, impossible stunts, a brief overview of an interesting story, and a hint of romance. This author isn’t about to let his guard down though; I’ve only upgraded myself from “skeptical” about it to “cautiously optimistic.”

If you’d like to watch it and make your own judgment call though, you’ll get the opportunity soon enough. You’ll be able to catch the trailer for Prince of Persia: The Sands of Time next Wednesday here on Destructoid, or on November 13th on the big screen with the premiere of 2012.