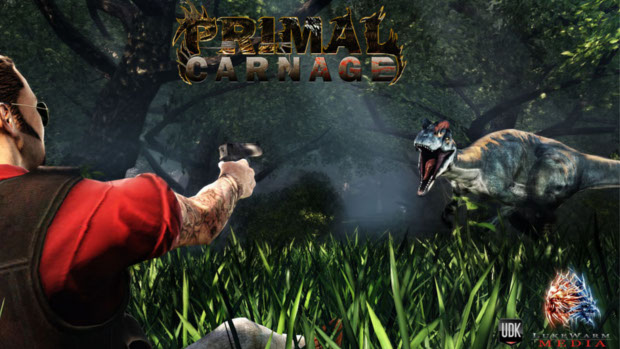 The world can never have enough games with dinosaurs. Dinosaurs are awesome, and this upcoming title from the newly formed Lukewarm Media has plenty of them.

Primal Carnage will be a multiplayer shooter where humans and dinosaurs fight each other. Humans will be running around in first-person, and trying to avoid being attacked by groups of raptors, or finding themselves alone with a T-Rex. Players on the dinosaur team have a third-person view and are able to hide in bushes and stalk the humans in hopes of a tasty snack.

I got a chance to play an early build of this at PAX East this year, and what I played was a lot of fun. It’s terrifying to be a human and find yourself cornered by a gang of raptors, and nothing is more fun than playing as a T-Rex who can chew on people.

Primal Carnage does not have a release date set yet, but they are planning on having a beta soon. You can check out their forums for more information.