The Sims started gaywalking long before a lot of others

In terms of inclusivity, EA isn’t the worst, I guess. I have my doubts that a corporation has any interest in what’s between my legs and who I invite to the bedroom beyond how they can profit from it, but baby steps here. They try. Maybe.

However, long before Mass Effect let you be gay if you were a girl, and Mass Effect 3 still said you couldn’t flirt with Garrus if you were a dude, The Sims were just letting same-sex couples exist. In 2000, no less. So, let’s have a golf clap for EA and Maxis. Oh, wait. It was done by mistake? Okay, let’s slow down here. 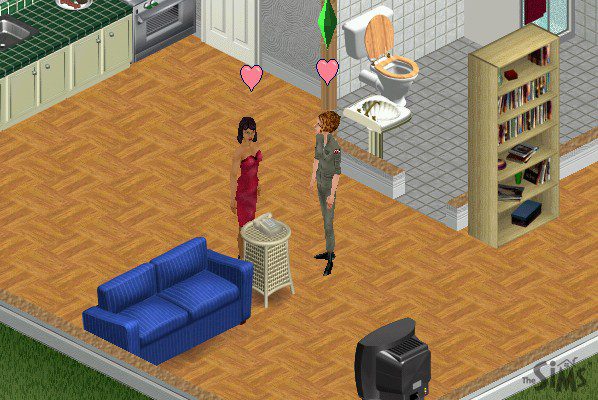 Video games haven’t been the quickest at acknowledging people of the LGBTQ+ persuasion. It’s a bit hard to track the early history of it, but the first known game with an LGBTQ+ basis is Caper in the Castro from 1989. After that, things get a bit spotty with some same-sex possibilities in Great Greed (1992), Fallout 2 (1998), and Persona 2: Innocent Sin (1999).

These days, it’s become more common to have a game with gay content, but that’s mostly in the indie sphere. It’s still somewhat rare in mainstream titles. To be fair, however, romance in general doesn’t seem to get much representation since most significant others are just there to die in the first chapter and give the protagonist a reason to become a killing machine in the name of justice. When same-sex romance does pop up, it can often feel like there’s this gated off area for people with different sexual preferences. It’s like, “here’s your token gay character. Please deliver us praise.” 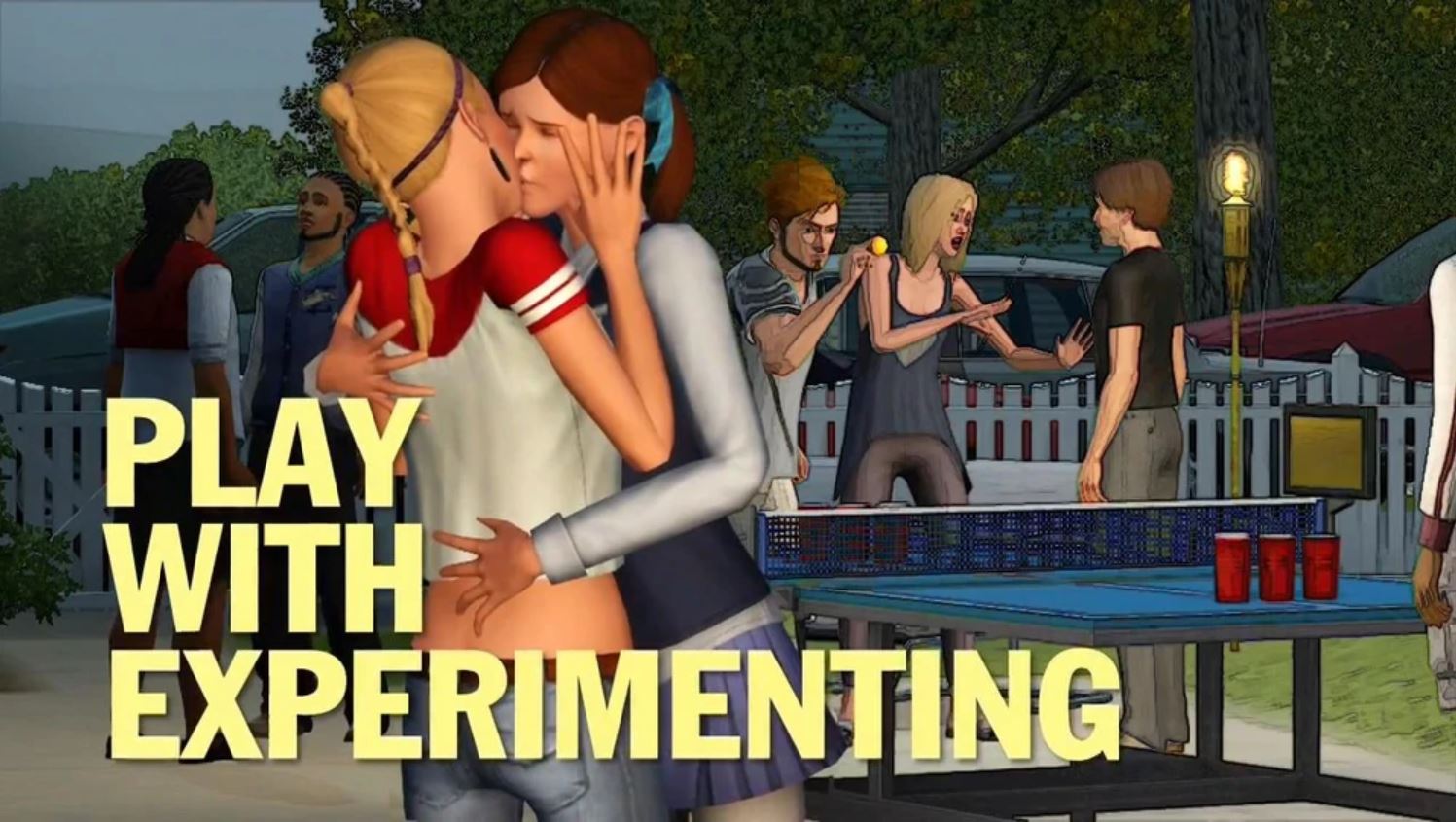 But it almost didn’t happen. The Sims, in general, was something of a surprise hit. The developers at Maxis plugged away at it, feeling that the executives had absolutely no faith in the final product. Therefore, EA’s executives were cagey about adding same-sex romance at all, thinking it wasn’t the right game to make such a controversial statement. It was in Maxis’ vision for their social system, but the executives asked for same-sex romance to be scrapped. Maxis was willing to acquiesce.

Luckily, no one told that to Patrick J. Barrett III, who was handed an outdated design document and went to work writing the code for social interactions while his boss was on vacation. Upon seeing his progress, Will Wright praised the social interactions and the inclusion of same-sex romance, so no one on the Maxis team questioned its inclusion.

Then E3 rolled around, and during a scripted demo, two female sims went off script and started making out, which brought a lot of unintentional attention to the game. Everyone on the team still expected EA to ask for that feature to be canned, but they never did. They just sort of backed off and put their faith in Maxis. Barrett even went back into the code to alter the social interactions so sims would lean straight, gay, or even bisexual if that’s what you preferred. Your Sim could have whatever sexuality you wanted, The Sims doesn’t judge. 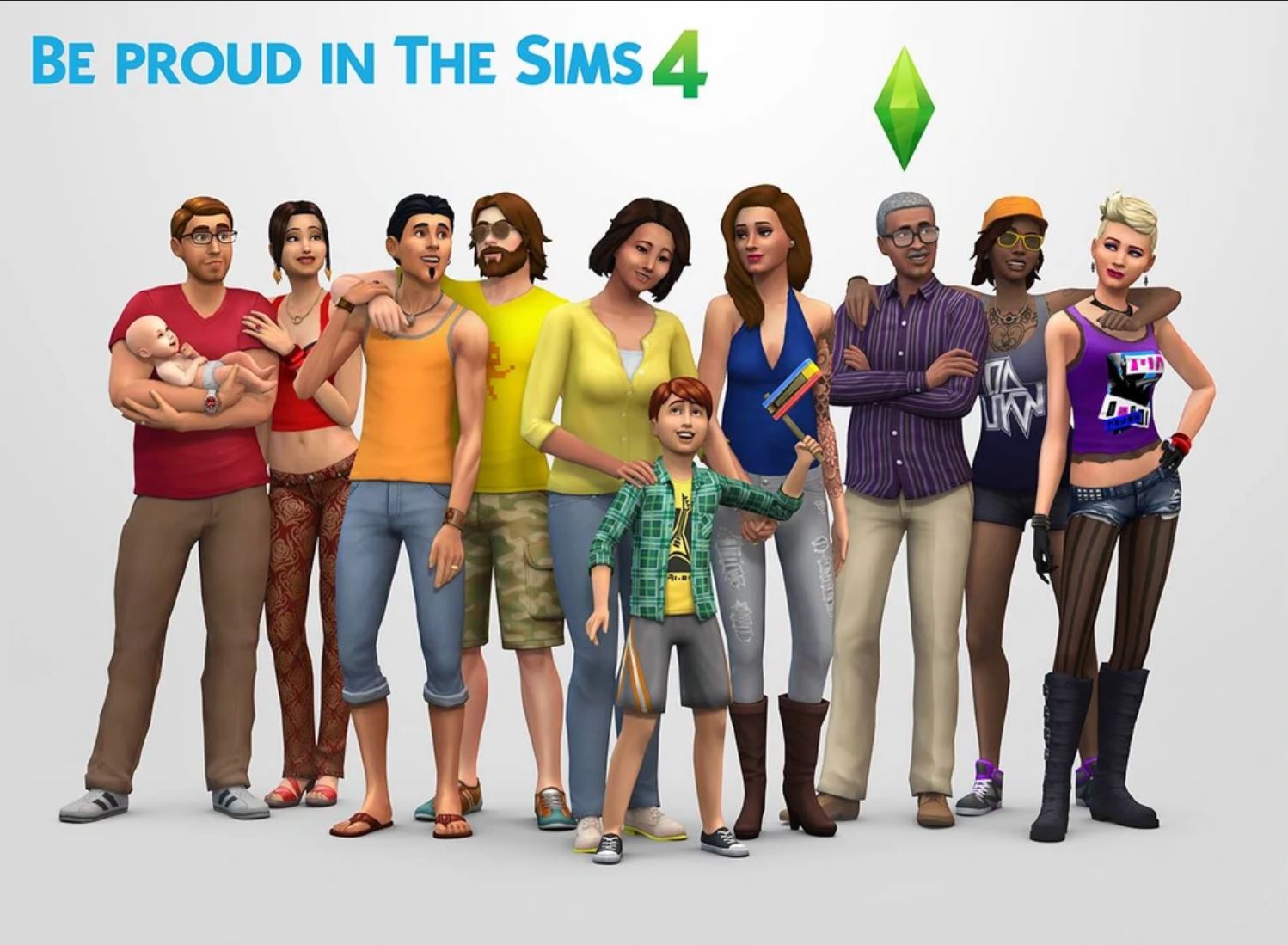 Sorry, that’s not exactly true. You could have monogamous romance between two gay sims, but they could never marry. If they lived together, they’d just be defined as “roommates,” which is kind of funny, because that’s exactly what you’d tell your parents if you were still in the closet and wanted to live with your partner. Again, to be fair to Maxis and EA, same-sex marriage was still illegal in most countries, so it wasn’t too divergent from the reality at the time. You could still adopt children, so it wasn’t entirely discriminatory.

The point is, however, that same-sex romance did land in The Sims. There was no getting that golden egg back into the goose; EA had to live with the fact that its breakout hit had a case of the gays. The Sims exploded in popularity, probably not due to its inclusivity, but definitely because it was addicting and let you electrocute children. Same-sex romance was stitched into the fabric of their 10-million selling mega-hit, and what were they going to do now? As most doctors will tell you, you can’t surgically remove the gay.

Surprisingly, despite its popularity, there wasn’t much backlash. I scoured the internet for some perturbed lawyer or religious group decrying the corruption of their youth, but I came up with bupkis. Just some stuff about recent titles being banned in certain backwards countries. There’s a chance that some people didn’t even notice. If they were afraid they’d get aroused by seeing two guys kissing, they didn’t have to see it. 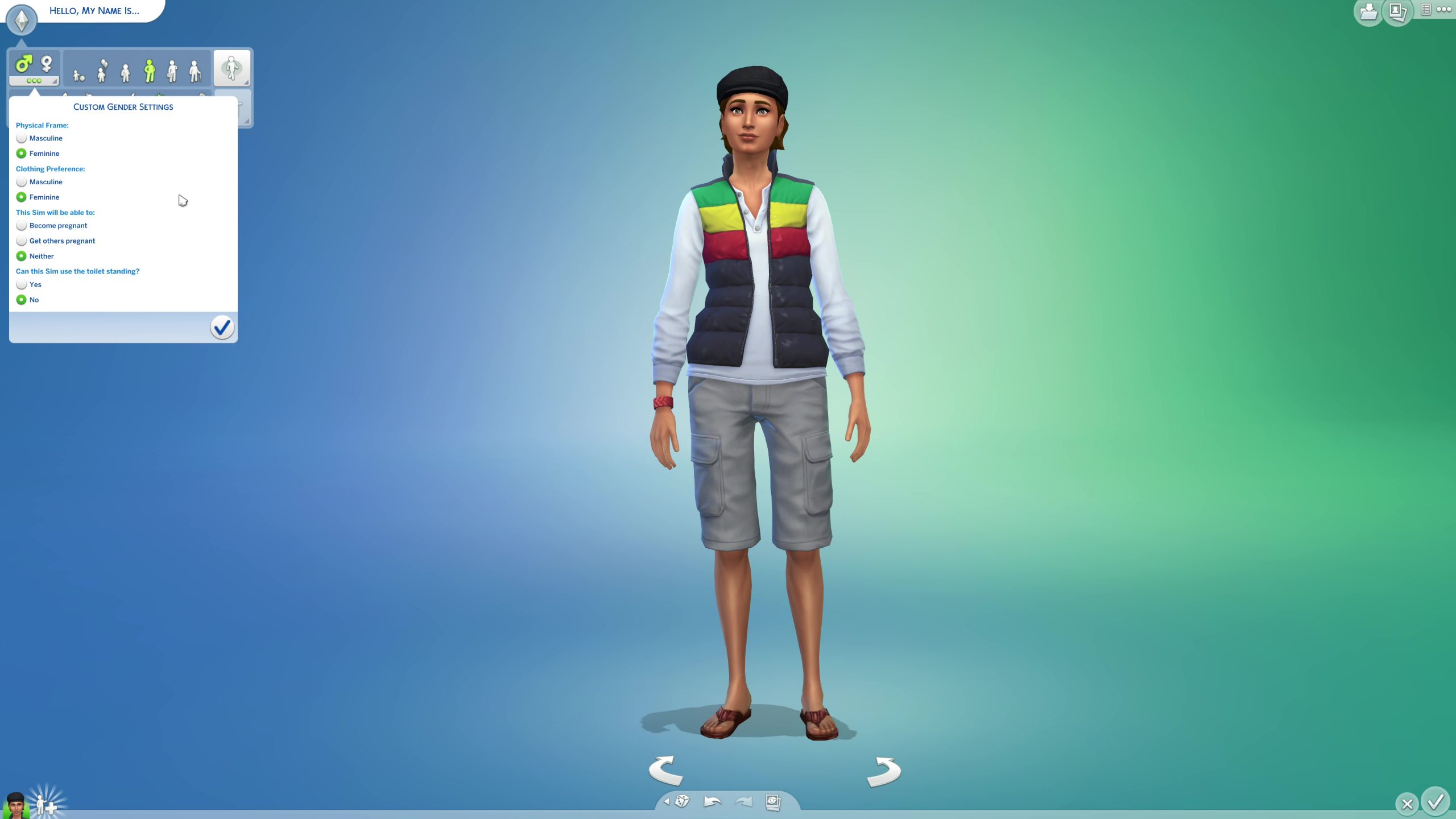 Instead of trying to backtrack, the developers ended up doubling down. Same-sex romance returned in The Sims 2, but now you could actually tie the knot. Sort of. It was called a “joined union” rather than a marriage, but the difference was just in the nomenclature. You could still adopt kids and they could also be gay. Or not. Your Sims would be proud of them however they turned out.

And this continued throughout the series, especially as it became more sex positive. “Woohoo,” The Sims nomenclature for sexual intercourse, began as something that you could only do in the appropriate bed, but from where we are in The Sims 4, you can get dirty in a bush or a changing stall for all it cares. New ways to lock thighs are added with practically every expansion pack, and it never cares about logistics. Or they’d be fed to the cow plant, you’re calling the shots here.

Not only that, but The Sims 4 added the ability to set, regardless of gender, whether your sim pees standing up or sitting down, if they could become pregnant or get other sims pregnant, and whether their body type and clothing preference leaned feminine or masculine. Sims could be transgender, which means they could also be pansexual. 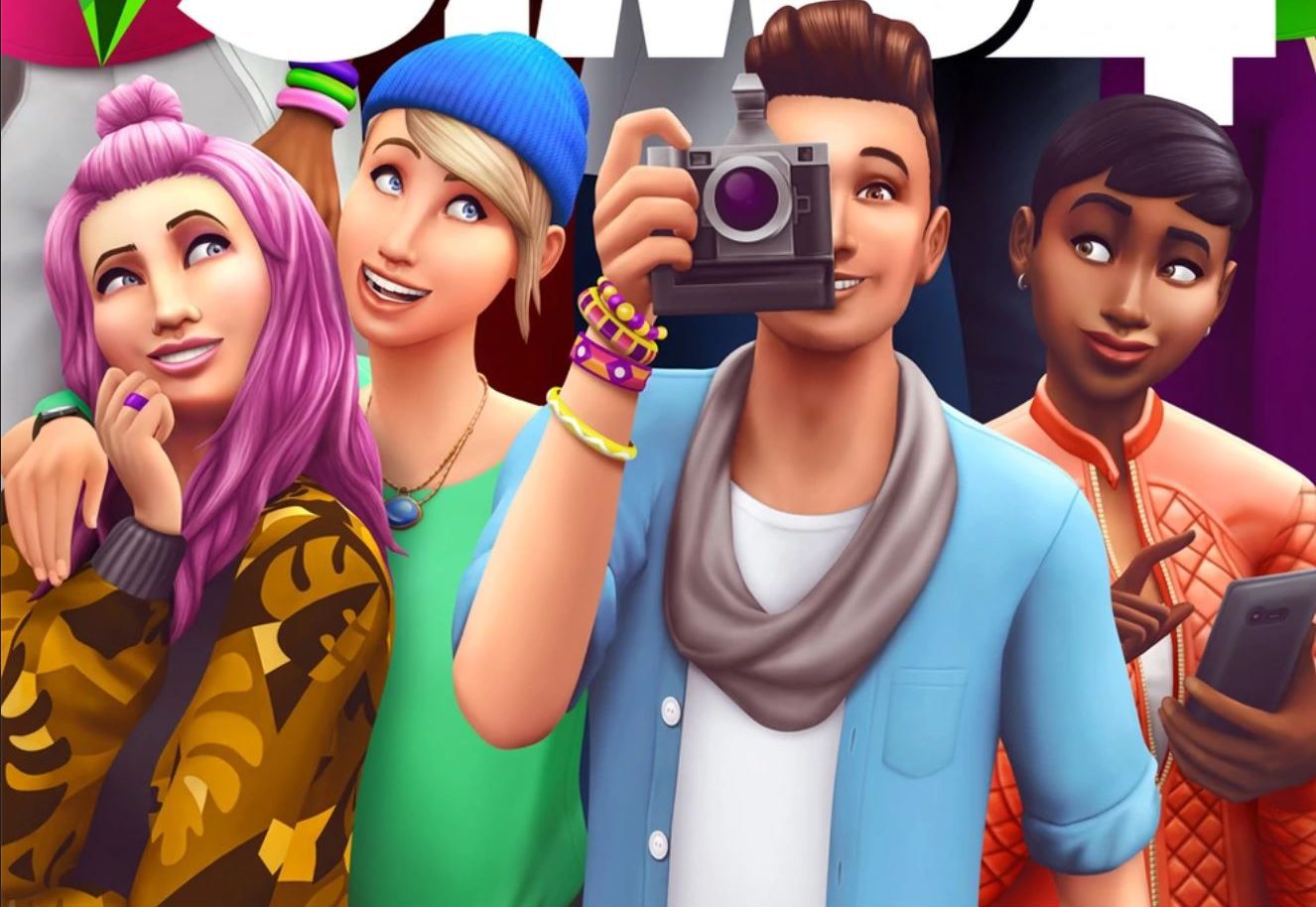 It’s unfortunate that this sort of thing should even be commended. When you’re playing with your virtual dolls, the game shouldn’t be judging you for who you bump their pelvis against. For that matter, I’ll go as far as saying the sexual preference of every romance option in every game, no matter the genre, should be completely up to the player, regardless of what your avatar has between their legs. Why the hell not? If you’re straight, you can just continue being straight, but those who prefer otherwise aren’t getting roped off. Why do gay men get thrown boring human du jour? Let them make out with Garrus if they want to.

However, it’s worthwhile mentioning that Maxis and EA have a rather unique place in the tapestry of LGBTQ+ games. The Sims was an incredibly early example of an inclusive game, and it helps demonstrate how far we’ve come. A cynic would say that they’re only appealing to that market for their money. That’s likely at least partially true. However, given how it started, when it started, and how it continues today, it feels less like checking the gay box and more like staying true to a small facet of the series’ design.

Again, EA shouldn’t be commended for not stomping out a perfectly wholesome facet of their dollhouse game. It shouldn’t have been an issue to begin with. But, props where they’re due, I guess.