When we did our recent “Most Anticipated ’09 PC Games” list, Zeno Clash made an appearance on a number of our community members’ personal lists. At the time we made the lists, I had heard of the game, but really didn’t know much about it other than it was a game that emphasized hand-to-hand combat.

ACE Team was nice enough to send a three level preview copy our way, and considering all the positive buzz I had heard, I leapt at the chance to check it out. Hit the jump to see how Zeno Clash is looking and how we think it’ll shape up for the final version.

The preview build I got consisted of a brief tutorial to teach you the basic mechanics of the game, and then three selected levels from the whole game that showed off the different things you’d be doing throughout the game.

Without going into great detail (so no one gets spoiled), the preview starts out by teaching you the basics of movement and combat. To no one’s surprise, movement is straightfoward controlled with WASD and the mouse, with Shift allowing you to run for a brief period of time. Hand to hand combat is also relatively straightforward, with left mouse triggering a regular attack, right mouse triggering a slower but stronger attack, and the spacebar being used to block and evade. When in combat, you can either choose to let the camera float freely, or you can lock on to specific enemies by looking directly at them and pushing E.

One you’ve learned the basics, the game jumps ahead to a bridge with a locked gate at the end. Here, you have to take on three enemies at once and defeat them in hand to hand combat. The sequence is relatively easy, but a nice chance to use the skills you learned in training against actual opponents. 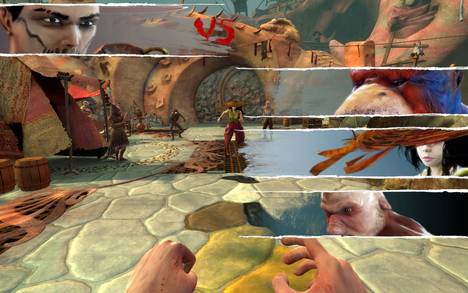 Once the enemies are defeated, you make your way through the gate, where you then enter a tutorial on how to use the ranged weapons in the game. While hand to hand combat certainly seems to be the primary focus, you occasionally will find various guns (usually fairly weak) and exploding skulls that you can use as small bombs. After getting accustomed to these new weapons, you then fight your previous 3 opponents, who have now chased you past the gate, this time using the awesome-looking fish head guns you manage to aquire.

Upon defeating your three foes again, the preview shifts to a totally different level. You find yourself in a bar in a strange city, where you’re trying to hunt down a creature known as Father-Mother. After speaking to a few of the patrons in the bar, you’re directed further into the city, where you find the person you’re looking for, but also a very angry elephant man looking to kick your ass. 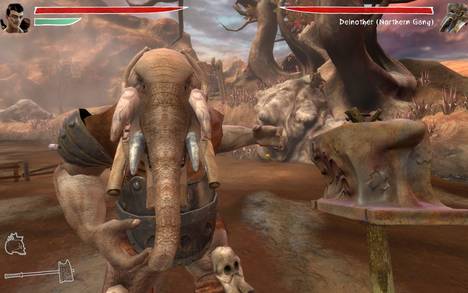 This portion of the preview gives some experience with melee weapons — because the elephant man is so bulky, the only way to take him out is to clobber him senseless with the sledgehammer. The basics of combat are still the same even when using melee weapons, but the weapon is a bit slower, so you have to time your strikes more precisely.

The final section of the preview gives us a boss battle. A hunter standing atop a giant dinosaur like creature launches beetle-bombs at you, while you have to take him out with a rifle.  It’s much harder than it sounds though, because you have to be constantly running and dodging the bombs, which chase after you with surprising speed. 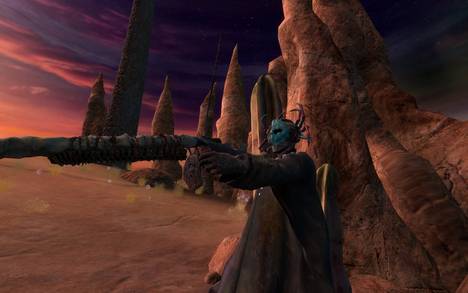 So, enough about describing the levels.  What was it actually like?

Overall, the game has a very unique artistic style that I really dug. If I HAD to compare it to anything, I would say it reminded me most of The Barrens zone from World of Warcraft (random, right)? The areas in the preview had a very desert-y, brushland feel, and there is a definite tribal theme running through the entire preview, which I thought was done really well. Even though similar things have been done before, Zeno Clash managed to do it without feeling like they were really copying from anything. 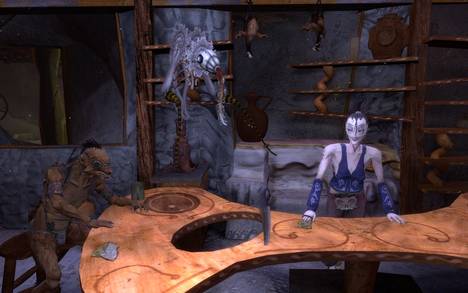 Additionally, the hand to hand combat was well done and fun to play. While I did find blocking to be a bit useless, I imagine that later in the game it becomes a much more usefull skill.  There are a decent variety of attacks to perform even though the controls are relatively simple, and even the preview battles seemed to have a reasonable level of difficult

While the boss fight with the rifle was really cool, the general gun combat was less exciting than the close-range combat. The guns in the preview tended not to do much damage, so gun combat just became slowly plinking away at your opponents. While not awful, I found myself wishing that I was just fighting hand to hand during the gun sequences.

Also, the music in the preview was fine, but nothing special. What was there worked, but I didn’t hear anything that really stood out or was particularly memorable. The dev notes did say though that the sound was not fully complete, so what we heard may not be the final music design. 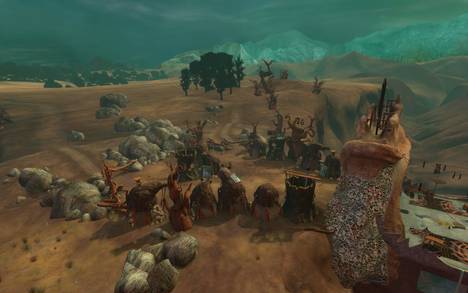 Overall, the preview of Zeno Clash left me eagerly anticipating the full game. While there were a couple minor kinks and glitches I ran into, pretty much every small problem I had was already covered in the “things to fix” list that ACE Team sent along with the game. If the rest of Zeno Clash plays like the preview did, then PC gamers should be excited for the game’s release next month

There’s some additional higher-res screenshots in the gallery below; check them out!