Yars’ Revenge, which launched in May 1981 for the Atari 2600, ended up being Atari’s best-selling original title on the seminal console. Twenty-nine years later, the publisher is releasing a reboot of sorts that re-imagines the game as a third-person on-rails shooter in the vein of Rez or Sin & Punishment.

Killspace Entertainment, a Hollywood-based studio that former Obsidian, Pandemic, Red 5, and EA Los Angeles employees formed in January 2009, is developing the new game. I recently had the opportunity to try it out for myself at an Atari press event in New York. Either Yar’s Revenge is difficult, or I’m just not very good at rail shooters. It’s probably the latter. 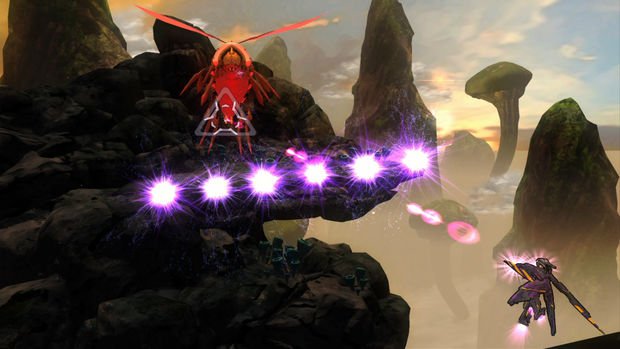 In the “story” of the 2600 game, the evil Qotile attacked the Yars’ home planet, and it was up to you to fight back. This time around, the Qotile have taken over and enslaved the Yars, but the player character is one Yar who has awakened after the Qotile brainwashed her — hence the subtle apostrophe shift from Yars’ to Yar’s in the title — and is taking the fight to them in order to save her species.

It’s not just the gameplay and story that Killspace is changing up in Yar’s Revenge: the Yars’ planet is now a colorful three-dimensional place — it doesn’t have a ton of texture detail, but it’s still pretty. Over the course of the game, you’ll make your way from a lush Yar (Yarian? Yarish?) village to the forbidding Qotile mothership. In addition, the game has an anime-inspired art style; the PR rep compared it to Ghost in the Shell. That look comes through most prominently in the game’s between-level “cutscenes,” which are basically just comic panels overlaid with the text of the story. 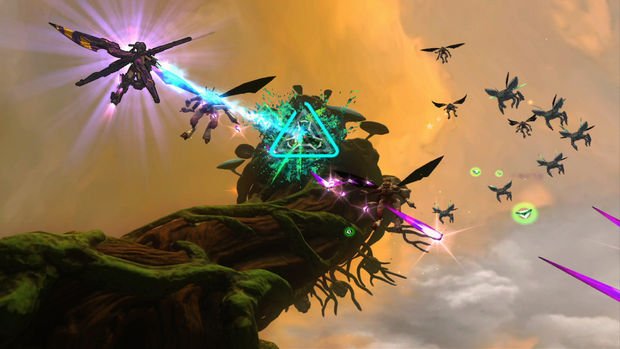 In the new Yar’s Revenge, Yars are basically humans in mech suits. The “on-rails” nature of the game pertains to movement through the world, which the game handles for you. In your mech suit, you have full control of your unnamed Yar — you’re able to fly around the screen on a two-dimensional plane, which is how you avoid obstacles such as physical objects in the world and enemy fire. (You can check out a snippet of gameplay footage here.)

The right trigger fires a never-ending stream of bullets. You can hold the left trigger to lock on to multiple baddies at once, and then let go of the button to fire missiles at all of them. There’s also a powerful rail gun at your disposal, courtesy of the left bumper. The only real vestige of Yars’ Revenge is the shield, which you activate with the A button — it envelops your Yar within a rainbow-colored bubble that resembles the barrier between the Zorlon Cannon and the Qotile in the 2600 game. 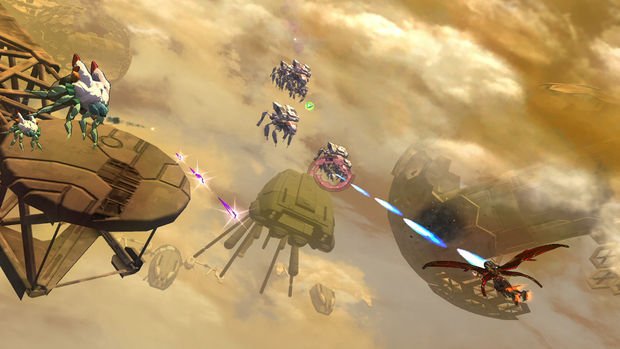 Like other rail shooters, the objective in Yar’s Revenge is to build up your point total. As you take out enemies while soaring through the game world, you’ll pick up score multipliers that will be very helpful if you can maintain them. Unfortunately, I was unable to do so, even with the help of a partner. Yes, Yar’s Revenge includes drop-in/drop-out co-op support; a second Yar can join the fight on the same screen, and it appeared that they share one health bar (so if either player dies, you have to start the level over again).

I played three different levels and saw some varied and challenging environments, and the different enemies forced me to change up my weapon usage, too. I sucked at the game, but if you’re a fan of rail shooters, you might want to keep your eye on Yar’s Revenge.