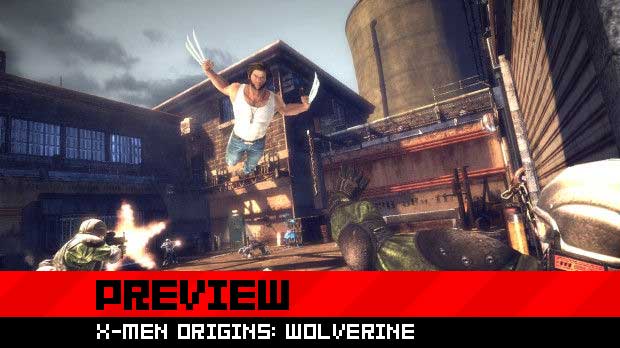 I don’t really like licensed games at all. Not just because they’re nearly always awful, but I have a mental hang-up where I find it difficult to enjoy a videogame when it’s not truly original. With this in mind, I was naturally not expecting very much when evil publisher Activision had me visit San Francisco to play X-Men Origins: Wolverine.

However, I must admit that in this case, my expectations were turned around quite quickly. In fact, I went from not expecting a good game at all, to being prized off the Xbox 360 by Activision because I had made it too far into the game and was playing things I wasn’t supposed to. That is quite a turnaround.

So, read on as we discuss why X-Men Origins: Wolverine might really be worth a look.

Did you know what Raven Software was already working on a Wolverine game before they were approached to produce a tie-in with the upcoming Origins movie? The team working on Wolverine are huge fans of the iconic X-Men character, and they had already set out to produce a game that truly captured the feeling of being everyone’s favorite adamantium-enhanced mutant.

In this respect, Raven has definitely succeeded. One of the first things players learn to do is the “lunge.” This ability does for Wolverine what web-swinging did for the more recent Spider-Man games, in that Raven has latched onto an unmistakable character trait and reproduced it flawlessly in an interactive medium. By simply selecting a target with the L button and lunging with the R button, Logan can cross huge distances, pouncing on his enemies and leaving them grounded to do with as he wishes.

Once a player has lunged, they will be able to stay on the enemy and slice him up with the X button or leap in the air for a powerful stab move with Y. These moves can be executed flawlessly with good timing, allowing Wolverine to lunge, kick himself off his target and then come down with a heavy stab with a perfectly flowing attack. Lunging is also a great way to cross wide chasms, and there are some terrific action sequences later in the game with Wolverine leaping from boats or trucks, cutting his way through the vehicle’s passengers before jumping onto the next one.

While lunging is the bread and butter, Raven has not skimped on other forms of combat. Logan can also get up and close with a very simple, yet surprisingly deep, combat system. Combos are very easy to perform, with simple presses of the X and Y buttons, but the use of context can make for some very inventive kills. Attacks are based on the positions of Logan and his enemies, and attacking them in different states yields different results. For instance, if an enemy is airborne, Logan will be able to punch them out of the air with Y, while pressing the same button on a grounded enemy simply launches a strong claw attack.

Wolverine is also able to grab enemies with the B button, and from there can either punch, throw or finish them off. Finishers become very useful for dealing with tougher, more lunge-resistant enemies, and is once again a simple affair. Simply hold down Y and watch Logan’s claws slowly extend. Once they extend long enough, they’ll flash and you simply press an attack button at the right moment to watch a viciously devastating finishing move.

Logan will unlock extra moves as he collects experience points from the enemies he fights, and players can also assign skill points to various attributes, as is typical of nearly all action games these days. In addition, Wolverine will be able to find and collect Mutagens throughout the game, which are based somewhat on the Plasmids from BioShock. Assigning a Mutagen to one of three potential slots will imbue Logan with extra powers, such as boosted EXP gain, or stronger attack power when near death.

Rounding out Logan’s powers are his feral senses. Activating these with a simple D-pad push highlights the weak spots of enemies and makes visible those things that would otherwise be hidden. Feral senses are also crucial for pointing players in the right direction, as a blue trail always reaches out to the next objective.

The action in Wolverine is absolutely brutal, and there are so many limbs flying around that you’d think people were being hacked to death by a mutant with big metal claws or something. It’s also worth noting that the game rarely slows pace at all, save for a few tedious block puzzles and door-opening sequences. These are thankfully kept to a minimum, however, and the next room full of enemies just waiting to be sliced from throat-to-bollocks in shockingly bloody fashion is always around the next corner.

Some players may be turned off by the combat, as it can be very hack-n’-slash with very little to break it up. It can also feel quite easy to just leap from foe to foe. Raven has countered this with a few different enemies, such as commando soldiers that can avoid lunge kills, and soldiers that can cloak themselves. Some of these enemies can be quite enjoyable to fight, but the invisible soldiers are particularly infuriating, even with feral sense.

I got to fight a number of larger enemies and bosses during my play with the game, but I have to confess they were a little disappointing. The battles against the Wendigos and the rock monsters were very repetitive, based around timing a lunge, jumping onto the enemy, and then just hacking away before jumping off. While impressive for the first thirty seconds, the lengthy scraps soon become tedious, which is made worse by the fact that these “boss” battles soon become quasi-regular occurrences.

Aside from what I played, Raven also showed off a few demonstrations, most notably two superior boss battles. One was against Blob, and it saw Wolverine jumping on his back and riding the corpulent monster through a grocery store. There was also a battle against a Sentinel, which I’ve been told is not based on the movie at all. The multi-stage boss starts on the ground, with Logan attacking various weak points, and takes to the sky when the Sentinel tries to fly off. Wolverine must then avoid debris as he freefalls through the air, getting close enough to the Sentinel to rip off parts of its armor. This was originally all done in QTE, but Raven used its extra year of development to replace most QTE elements in the game with interactive gameplay.

Altogether, I found myself taken by surprise with this game. I went in expecting another crappy license, but actually found a shockingly robust action game with plenty of blood, guts and little X-Men facts in loading screens. A very promising game that truly captures how it feels to be Wolverine. Should be a hot one, kids.