It’s difficult for games with annual release dates to really improve drastically from year to year. More often then not, developers choose to focus more on improving or adding one or two features and hoping it’s enough to convince the fan base to buy this years edition.

However, this year THQ is giving WWE a complete overhaul, ditching the Smackdown vs Raw name for a more simplistic WWE 12. Does this reboot have enough to convince the casual and hardcore wrestling audience to invest in this years edition?

The biggest addition to WWE 12 is the new “Predator Technology” system. This new engine allows for better rendering, animation, more dramatic camera angles, improved ring/rope physics and the ability to interrupt moves. Thus this all makes the game look and feel a lot more like the matches you see on T.V. Now when you land a high angle back drop, the impact of the slam ripples though the mat and makes the ropes shake. The camera will also get in closer to the action at certain times and really let the player get a good angle of all the pain that’s taking place in the squared circle. It all comes together to form a much more realistic looking wrestling game, but the improvements don’t end on just the improved looks.

Gameplay wise, there’s a lot going on under the surface that the average gamer might not notice at first. Instead of creating a completely different control scheme or a more complex gameplay mechanic, developer Yuke’s has simplified things while adding some nice tweaks and A.I. to strengthen the core gameplay. 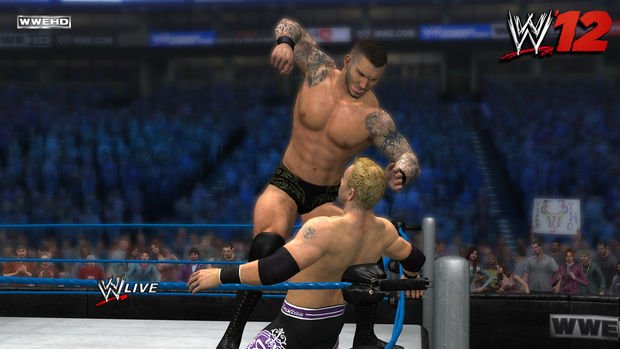 The first thing I noticed was that the beginning of a match is much faster. Fresh opponents get up quickly after being slammed down on to the mat in the beginning too. This allows the action to start off quickly, allowing the player to get moves off fast and build some momentum. As the match progresses and the wrestlers start taking more damage, they start to slow down. This sets up a more realistic pace and makes the matches more believable and lifelike.

THQ has also tweaked how you and your opponent gain momentum. Older versions had players lose momentum when taking a beating, leading them to take more punishment. Now, much like Street Fighter IV’s Ultra Combos, when you take enough of a thrashing your wrestler can preform a “Comeback.” This is a series of Quick Time Events that if performed correctly, will dish out a lot of damage and even up the playing field.

One of my favorite aspects was the improved reversal system. If timed correctly you can reverse strikes, grapples and moves. While it takes time to get used to, once you start pulling off reversals you can see that there’s a lot of depth to the gameplay then most would think for a wrestling game. The comprehensiveness of the reversal system makes it so you always feel in control of what’s going on in the ring, even if when you’re not on the offensive. 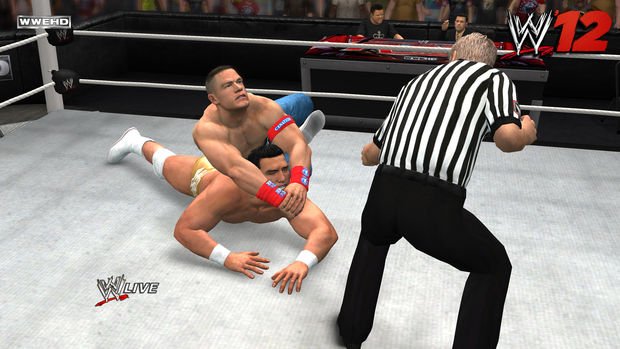 Another cool new feature is the limb targeting system. While grappling, you can target either the head,  left or right arm and the legs. By wearing down the limbs it’ll make it easier to make opponents tapout. Pulling off submissions in WWE 12 is pretty simple, the classic button smashing formula is applied. Personally, button smashing is normally not my cup of tea as a gameplay mechanic, but for some reason it feels alright in this setting.

Honestly, it had been a while since I’ve played a Smackdown vs Raw game, but it didn’t take long to get use to the controls. Logical placement of the button configuration made the learning curve fairly short. It wasn’t long before I was fighting my opponent and not the controller.

Not all that surprising, the game is packed with content. With a roster of 70 plus wrestlers, 80 plus match types, Campaign mode (said to clock in around 12 hours), Universe Mode (their take on franchise mode) and creation tools for wrestlers, moves, entrances and — brand new to the series — arenas, there’s a lot to do in the game. 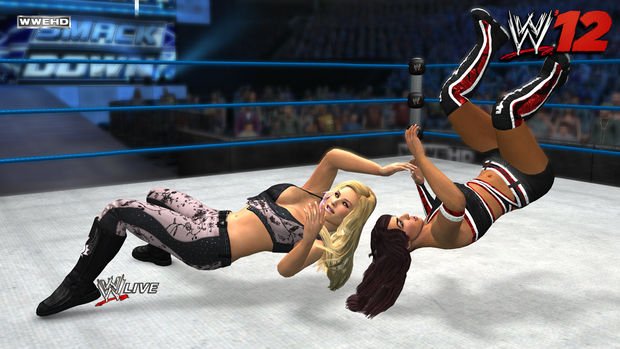 The new arena creation is pretty cool too. You can customize everything from the mat and apron to the barricade outside the ring. I didn’t noticed a way to create your own logos so it seems that you’ll be limited to pre-set logos but with over 200 of them, you’re more then likely to find what you’re looking for. It’ll also drastically reduce the number of times you’ll see the World Penis Federation pop up.

It’s not hard to tell that THQ has been trying really hard to improve upon the formula that they have been trying to master since the PlayStation 2 days. In fact, I’d say this is shaping up to be one of the best wrestling games of this generation. It’ll be interesting to see if they can tap into the more casual wrestling fan market since this version seems to have a good mix of simplicity yet deep gameplay.

Also, as a personal side note, THQ got Vader in the game and that right there just about won me over.