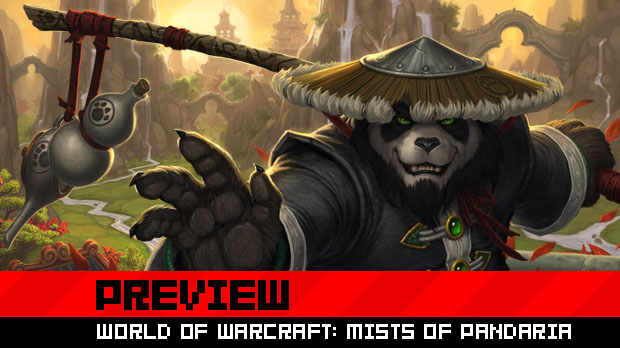 It’s been out for a little over seven years now, but World of Warcraft is still going strong. Last week I was invited over to Blizzard to take a look at Warcraft‘s upcoming expansion, Mists of Pandaria, and I was able to get some playtime with the game and speak to some of the members of the development team about what’s in store when Mists of Pandaria is released later this year.

The events of Cataclysm (World of Warcraft’s most recent update) have caused the southern continent of Pandaria to emerge from the fog that has hidden it for the last ten thousand years. World of Warcraft: Mists of Pandaria tells the story of what happens when the Alliance and the Horde discover this new continent, its resources, and the people who live there.

Unlike previous expansions, Mists of Pandaria will not feature a single “big bad boss” at the end of the patch cycle. As Lead Designer Cory Stockton explained, the central story arc of Mists of Pandaria concerns the tensions between the Alliance and the Horde finally coming to a head and erupting into an all-out war. Mists of Pandaria begins with the Horde and Alliance both landing on the continent of Pandaria, and conflict breaks out between the two almost immediately, as each group fights to rally the Pandaren to their side as they prepare for war.

The future patches for Mists of Pandaria will be heavily story-focused, with each update being described as essentially a “story sequel” to the one before it. Instead of just introducing another dungeon that brings you one step closer to defeating the “ultimate boss,” the patches will advance the story as the war moves from Pandaria to the mainland, culminating in a full-blown siege on Orgrimmar. 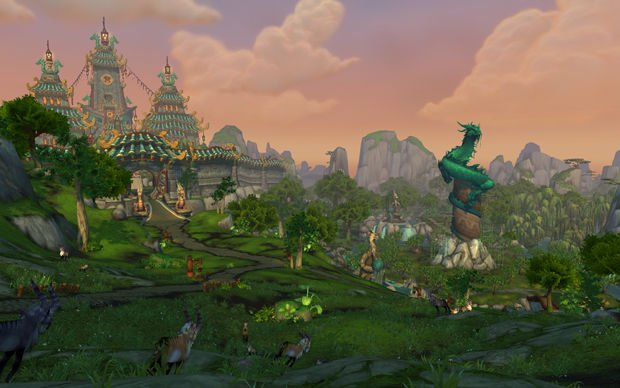 Greg Street, Lead Systems Designer, told me that one of the major priorities for Mists of Pandaria was to provide much more end-game content for players, particularly since the primary focus of Cataclysm was revamping much of the original world and the starting areas. In addition to the seven zones on the Pandarian continent that will take players from level 85 to 90, nine new dungeons and three new raids, and multiple end-game faction quest lines, Mists of Pandaria will also feature a number of new systems designed to appeal to end-game players.

To encourage players to revisit older dungeons and to increase some friendly competition within a player’s own server, Mists of Pandaria is introducing a dungeon challenge mode. Essentially a timed dungeon run, the challenge mode will automatically scale players’ equipment to the proper item level of the dungeon. Beating dungeons fast enough will earn players a spot on the leaderboard, and will provide cosmetic, visually impressive equipment for players to use in transmogrification.

The pet battle system that was announced at BlizzCon was also shown to us in more detail, although we unfortunately were not able to get hands-on play with the system. The pet battles will be 3 vs 3, and they appear to play out like a typical turn-based fight in an RPG like, say, Pokémon. Battles will be cross-server and simple to jump in and out of, but competitive players may be disappointed — this system is designed to be low-key and casual. You can’t see the name of your opponent, you can’t speak to them during the battle, and there are no rewards for winning. 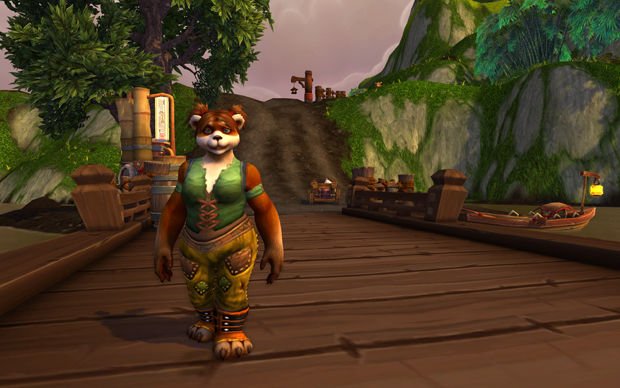 Mists of Pandaria is also introducing a new quest type: scenarios. Street explained that when people end up with a group quest in their quest log, they tend to skip it — players find it too difficult to get together a proper group just to run and do a short quest. Scenarios aim to solve that problem by replacing standard group quests with short, instanced content designed for three players. Rather than spamming general chat looking for party members, you can queue up just as you would in the dungeon or raid finder. The content is specifically designed to not require the holy trinity of tank-healer-DPS; the idea is that viable groups can form quickly, and people can jump right into the content. While the examples we were shown were all combat scenarios, Cory Stockton suggested that there may be some entirely non-combat story scenarios for players more interested in Warcraft lore.

And, as anyone who has been following Mists of Pandaria knows, this expansion will be introducing a new race — the eponymous Pandaren — and a new class, the monk. Mists of Pandaria will also include a complete overhaul of the talent system. Street told us that the original talent tree concept essentially ended up creating cookie-cutter builds, as the community identified an optimized build for each tree. Many of the previous abilities granted by talents have been rolled into the abilities themselves, and talent choices now provide smaller, situational abilities or bonuses, regardless of specialization.

For example, when I made my Paladin, my first choice was choosing between one of the following three talents: a flat 10% movement speed increase in all situations, a moderate movement speed increase that lasted for eight seconds but only triggered when I used Judgement, or a significant movement speed burst that was its own ability on its own cool-down. The idea behind the new system is to make each talent choice viable and to eliminate “must-have” talents that virtually all players end up taking. 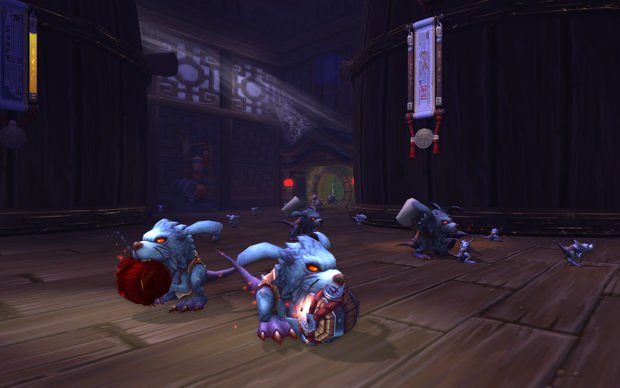 There’s no specific release date yet, but Blizzard says that five of the seven final zones in Pandaria are content-complete, and that they’re trying to get Mists of Pandaria out as fast as possible. This expansion doesn’t appear to be fundamentally altering the core of World of Warcraft — you’ll still be doing quests where you kill ten jaguars, and returning players will likely only find minor tweaks to their existing rotations — but Blizzard is hoping that the expanded focus on end-game content and the looming war between the Horde and Alliance will keep existing players entertained and entice lapsed users to return to Azeroth.