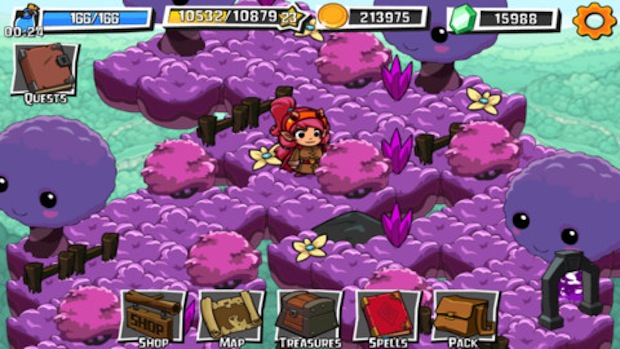 I had a chance to check out Square Enix’s casual iOS (and soon Android) RPG Wizardlings at New York Comic-Con a week or so back. It’s a cute little title that has your hero or heroine moving to lift the darkness and push back the shadows, tile by tile.

Your character follows the tap of your finger around floating segments of the colorful world of Skywind, but their movement is limited to the lit/uncovered tiles only. When coming to a tile covered in dark shadows, it’s your job to cast the darkness out with one of your magic wands. The eventual goal is to clear out all of the darkness, unearthing scenic lands and treasure along the way, moving on to explore more of Skywind. But monsters hidden in the shadows won’t make it easy for you.

When an enemy (or multiple enemies) pop out of the shadows, a battle kicks off. This is a turn-based encounter that makes use of your spellbook. With the treasures and supplies found during exploration, you’re able to use the spellbook to combine them to create magic spells that can be used in battle.

In battle, brewing up a spell is as easy as touching one of the icons at the base of the battle screen. If you have enough resources, the spell is created. Another tap puts the spell to use. These are all based on elements, giving the battle system a rock-paper-scissors kind of feel. Finding more wands through exploration gives you access to more spell types, letting you take on even more monsters.

These supplies, like ingredients and gems, are finite sources, so you’ll want to go into battle stocked up, which means that you’ll want to poke all of the little dark tiles. I realize that this doesn’t sound very exciting on paper, but it is fun randomly finding treasures and enemies. Along with these found supplies you’ll also uncover things like armor and accessories during exploration. Like any good RPG, you can equip and customize your character with them.

All of my enemy encounters were more entertaining than challenging, but I could see that changing as the game progresses. Too easy? Maybe, but this is a casual game. And it could be that tapping dark tiles to make them light might not engage more hardcore gamers. If that’s the case, this game probably won’t satisfy your RPG itch. But, if you go in looking for something cute and simple, you’ll have a good time with Wizardlings.

Either way, I’ll say that this game features what are probably the cutest enemies in an RPG ever. Overall, Wizardlings is very cute game with its deformed characters, cuddly-mean baddies, and vibrant world art. The floating land masses and their strong colors seemed to pop right off the iPad I was using to test out the game.

Wizardlings is a free-to-play iOS title, which means that there’s a pay element built in. Mind you, that was never apparent in the time I spent with the game. What it boils down to is that uou can pay to acquire more resources instead of hunting them down. Square Enix tells us that everything you can buy can also be found, which is nice to hear.

Wizardlings is available for iOS now on the App Store. Square Enix says that it will come to other mobile devices soon.