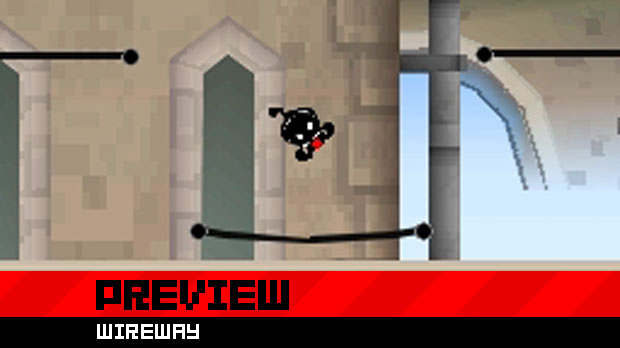 You know, some people are going to kind of hate me for this, but I miss some of those earlier games that came out for the DS. You know what I’m talking about, those games with one gameplay mechanic that lasted for the entirety of the whole experience. I’m talking about games like Kirby: Canvas Curse or Yoshi: Touch and Go; you know, games that did one thing and did it really well. Plus, they just used the DS in a unique and different manner.

So, it was probably WireWay that was the most pleasant surprise of Konami Gamer’s Night for me. A simple DS game that works with one solid gameplay mechanic and does it pretty damn well, that’s what WireWay aims to be. Color me surprised that it was the most fun I had all night. Go figure.

WireWay works pretty simply. Your character, Wiley Springer, is a little black stylized robot who is good for two things — running back and forth until you tap him to jump to the nearest wire, and being shot like a rock from a slingshot from said wire. It’s this mechanic of pulling Wiley Springer like a slingshot and sending him off at high speed to the next wire that is the basis of the game.

The best way that I can describe WireWay is that it is a platformer much like Donkey Kong: King of Swing or CarneyVale: Showtime is a platformer. What initially seems a little simple quickly becomes a lot more complex. The first level just involved me angling Wiley straight upwards to catch some wires. By the third level I was launching the little guy left, right, up, and down through caverns, racing rising lava, bouncing him like a pinball off bumpers, and using the helpful angle/velocity guide to get the robot to collect stars and catch far off wires to the end.

Like I said, this game has a simple premise, which is great. My only concern is the fact that WireWay could be too short or too easy.  Forty-eight levels may sound like a lot, but I just know that a hardcore gamer could power through that many levels like nobody’s business. However, with Ad Hoc multiplayer, there could be more life in this game than I expect, and I’d be lying if the art direction has not already charmed me.

I’d say if you like simple games, good for quick pick-up-and-play, you should definitely keep your eyes on WireWay. If Konami and developer Now Productions can keep the rest of the game as charming as the first three or so levels I played, they’ll be golden.