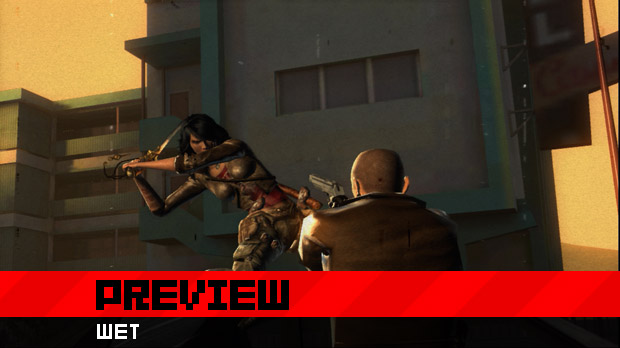 How long have you been hearing about WET? For a couple of years, right? Even though it has been around awhile, what do you really know about it? Sure, you saw that bathtub video. You know there’s a girl. And guns. And flipping. And that things were looking pretty hairy for the game when the whole Vivendi and Activision merger went down.

Worry not, though, as Artificial Mind and Movement’s (A2M) latest is now being published by Bethesda Softworks. From what we saw at a recent event in London, WET looks to be right on track for a fall 2009 release on the PlayStation 3 and Xbox 360.

Hit the jump to read our preview of WET.

WET is a great looking “acrobatic shooter” that follows Rubi, a dual wielding hired gun that would much rather double back flip and shoot than just simply run and gun. And while the aerial nature of Rubi’s style would seem like the more difficult way of doing things, her actions fit perfectly within the world of WET, which looks like a 1970s style movie, with some of the style seemingly bitten directly from Quentin Tarantino’s most popular films. That means fancy camera angles, flashy kills, slow motion shots, and high body counts. Nifty touches like flickering, film shake and grain make it feel like you’re watching an old flick. The game even cuts to a drive-in theater style popcorn advertisement in between levels. WET definitely has style.

Rubi isn’t the kind of girl to flaunt her curves. She’s too busy being a bad ass — a “fixer,” as in one who fixes “problems.” A gun-for-hire. She’d rather flip over your head and shoot you in the back than give you the time of day. But doesn’t mean she isn’t sexy. It’s just more of a subdued thing. She is more of a heroine than a sex symbol, really. She’s mysterious and money-driven, and not really interested in raiding tombs or wearing push-up bras.

We saw the introduction and first level of WET, which serves as sort of a training level. Set in San Francisco, Rubi is out to retrieve an item for a client, something contained in a metal briefcase. She comes crashing through a glass ceiling mid-deal to retrieve the case. And of course, a gun fight breaks out, and it’s here that we get a first taste of how the game plays out.

This reminds me of another game…

Forget taking cover and behind-the-wall firing — WET is more of a go anywhere, shoot anywhere kind of title. Rubi can run up any walls, flip off ledges, and gun down enemies in mid-flight. In fact, you’re encouraged to kill while in flight. When she hits the ground, the action does not stop: she can continue to slide on her knees, firing at anyone that gets in her path. Her weapons of choice are two guns and a sword. She can fire both guns independently while flying through the air in what the developers call Split Targeting. Slow motion kicks in as Rubi catches air, and so does a sort of auto-targeting for the secondary target. Players are free to control the primary target,  which is centered in the middle of the screen. This split targeting is only initiated during acrobatic moves.

The swordplay is supposed to round out WET‘s combat, though it didn’t appear to be as elegant in use as the guns did. Just like with the shooting, Rubi can use her sword at any time. It also doubles as a crate breaker and a path clearer.

The acrobatic moves and combat can be chained together, with the overall goal of connecting consecutive kills. For example, we saw a wall run that transitioned into a slow-mo dive, and then into a knee slide, with guns blazing all the while. With practice, all the moves and techniques can be chained, with kills feeding into WET‘s scoring system, which grants points for kills. Slick moves work into a style multiplier, displayed on-screen. Points can then be used as currency, which can unlock new moves and weapons.

A special sequence called Rage Mode was also briefly shown. The entire setting becomes red tinted and highly stylized as Rubi goes on a hyped up killing rampage. Blood splatters in solid white, and enemies crumble and blow away after being killed. It’s not clear on how these sequences play into the story of WET, but they certainly look like fun.

The last section we saw put Rubi on the road in a car hopping sequence, a chase for the metal briefcase on the Golden Gate bridge. Essentially this is a shooting gallery peppered with button-triggered quick time events. Watch on as Rubi jumps from moving car to car, moving forward to catch up with her target, narrowly avoiding accidents. It seems that the player controls the shooting, but not much else — the even cars move themselves. While player interaction appears to be limited, the sequence certainly looks fantastic: in one part Rubi jumps over to a car to shoot an enemy’s head off. The poor guy gets thrown under another vehicle in motion. Ii was hard to shake the feeling that player control was very limited here. Other than control over gunfire, this could have been an in-game cinematic.

It only took about two shooting jumps in the beginning for me to see similarities in WET’s gunplay to Midway’s Stranglehold, especially with the slow motion diving action. And the freedom of combat reminded me a bit of Capcom’s Devil May Cry. In fact, blend both combat styles, drop in a sassy female lead, and place it in a Kill Bill world, and you’ve got WET. Kind of. We’ll definitely need some more time with the game to say how well the formula works. We’re a bit worried that the game is more of a visual spectacle than an immersive third-person shooter — it just doesn’t appear to be very challenging from what we’ve seen.

For now, we’ll say that A2M has got the style thing down. WET, with its stylizied visuals and movie settings, looks fantastic. And it sounds like they’ve got quite a ride lined up for us. The story was penned by Duppy Demetrius, who wrote the story for the first five seasons of the television hit 24. Rubi will be voiced by actress Eliza Dukshu. The stage is definitely set for a great action videogame. What remains to be seen is how much control we’ll have over Rubi’s actions, and how well that control is implemented. We hope to spend more time with Rubi and WET very soon.