If the emergence of Command and Conquer: Red Alert 3, the coming of Halo Wars and awesome authority of Starcraft 2 have anything to say, it’s that the real-time strategy as a genre is very relevant to today’s gamer. So when I had the opportunity to check out Relic Entertainment’s and THQ’s upcoming RTS, Warhammer 40,000: Dawn of War II, I was pretty interested to see what they have to make it special.

Nevermind that I have the RTS skills of discombobulated panda, it was interesting to see what they’ve put forth. Even with this jumping off point, by sitting down with principal designer, Jonny Ebbert, I learned that this game is designed for people just like me. Story missions are a little shorter, the action is a little more intense and exciting, and everything is designed to be a bit more casual friendly. 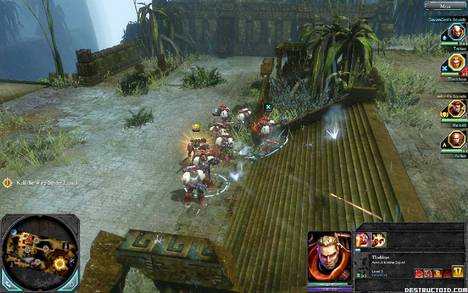 Once we got going on the single player mode, things picked up. Dawn of War II (like its prequel) has an interesting method — instead of controlling individual units or working on building resources, you control squads of brutish Space Marines from the Warhammer 40,000 universe (dudes that look like resplendent polychromatic version of our Gears of War pals).

Each squad has a leader who cannot be killed, but will be revived by the other units when downed. Interestingly, you’ll only be controlling four squads at most, each performing a slightly different function and practice. Each is led by said squad leaders and commanders, who are generally badass and can do hella cool stuff, like run up to Orks and hack them up with chainsaw blades.

Each of those commanders each have their own plot elements too, so if you are one of those guys who like to have a story arc about your macho manly men, there you go.

There are cover spots throughout each map, and the option to leave a squad behind a wall shooting orks (your squads can take pretty good care of themselves) while you deal with another squad is pretty nice. 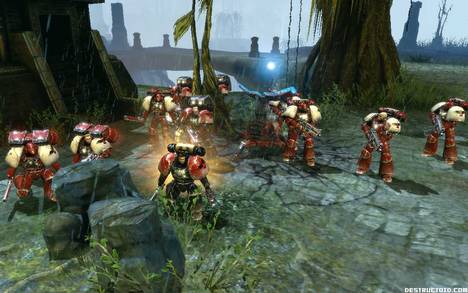 For fans of traditional RTS, this next part might irritate you — there is no resource management in Dawn of War II‘s single player. When you start out with your squad, generally it’s not going to increase by much, and there’s not much you can do about it.

However, Relic has placed some RPG-elements in the game, so as you use your Space Marines, they will gain more and better skills. Healing, stat boosting, special attacks and more are all things you’ll learn as characters level up. Some people will hate it, but for those who are not fans of micro-management, this might make Dawn of War II interesting.

As for multiplayer, there are two options I checked out, both of which use Games for Windows LIVE (this also means Dawn of War II comes with 48 Achievements right off the bat!). One mode was the pretty cool co-op mode, which basically splits up the four controllable units between two users who work through the story mode together.

I was told that for many players, this is basically the only way to play through the game at the hardest difficulty setting. While only controlling two squads seems a little lackluster for an RTS, the game was designed for this sort of play, so there was never a time where I wasn’t doing something. Besides, killing a boss Ork with another person was pretty fun, I must say. 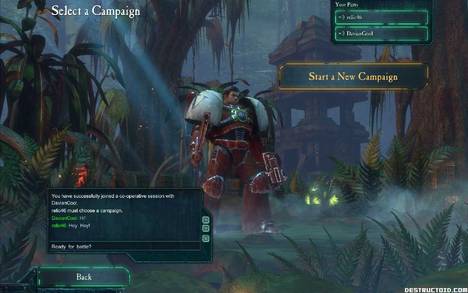 The control in Player vs. Player’s point mode was a lot more hectic in pacing of the single player. With five maps (two to be released as free downloadable content), there’s a lot more going on, and having the options to play as the Space Marines (manly dudes), the Orks (green nasty dudes), the Eldar (sexy dudes and ladies), and the Tyranids (James Cameron’s Alien-esqu monstrosities) freshens things up after the strictly-Space Marine single player mode.

I’ve got to say, the Eldar blasting lightning and the Tyranid with the Smoker-like tongue-move (think Left 4 Dead) was pretty cool. Each race plays very different, so choosing the right squad commander class is very important.

However, when your squads get killed, it takes an eternity for them to be re-spawned at the building point. Resources — which you get in multiplayer with controls points and are used to pay for more units — are also pretty scarce, so you really don’t want you squads to die. Ultimately, a good thing for anybody interested is to try the open beta and see the multiplayer yourself. 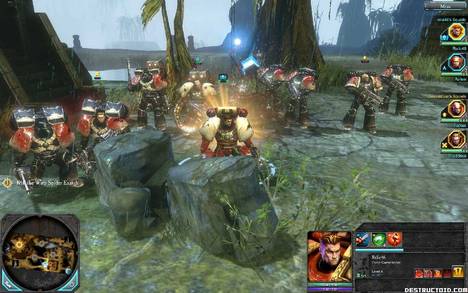 As far as graphics are concerned, this game is designed to run on rigs that Relic equates to a “three year-old machine”. From far off, this game looks pretty great, with lots of color and fluidity. I only saw two environments, a desert and a jungle, but both looked very bright. Up close, the units reminded me a bit of the blocky characteristics of World of Warcraft, but considering all that is going on in Dawn of War II, and its unique style, I’m not necessarily going to hold that against Relic right now.

In the end, we’ll have to wait and see when Dawn of War II is released for PC on February 19.