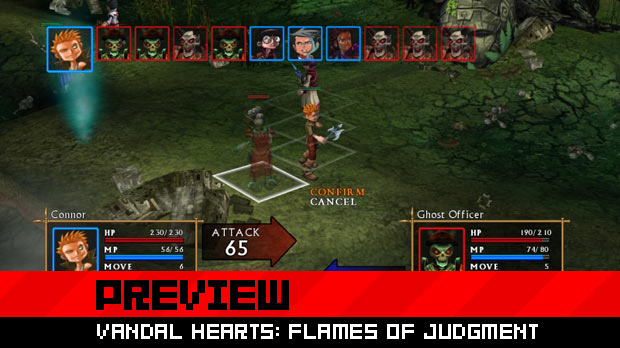 My all time favorite game, in the history of the world, beyond all shadow of doubt, is Gladius. This genius of a game sold like crap, and is, in my opinion, the most underappreciated of LucasArts games. I mention this because I adore strategy role-playing games, and if they aren’t positively drowning in anime stylings — well, I’d be pretty damn happy.

So although I didn’t get to spend much time with Konami upcoming downloadable strategy RPG, Vandal Hearts: Flames of Judgment, I do have to say the prospect of a solid, 3D strategy role-playing game is pretty cool. For fans of the Vandal Hearts series, this is certainly something to keep an eye out for.

Vandal Hearts: Flames of Judgment looks to be a strategy role-playing game in its purist sense. The level they were showing off had a squad of spunky, cartoon tweens battling within a jungle setting against some undead skeletons. Each member had different skills and abilities, and they could move about the on a grid much like Fire Emblem or Advance Wars, except, you know, in 3D. The game looks pretty good, especially considering this is a downloadable game.

It’s a bit early to make much of an impression, but taking a look at the pics, it’s easy to see that Vandal Hearts: Flames of Judgment warrants some attention.