A day after the VGAs, in a darkened bar in Hollywood, Naughty Dog and Sony showed off an exclusive gameplay demo of highly anticipated Uncharted 3: Drake’s Deception to a select group of videogame press.

Destructoid was lucky enough to be a part of this group.

Before I get to what we saw, a little disclaimer: I love the Uncharted series. In my mind, Uncharted 2: Among Thieves is a perfectly constructed game, with some of the best pacing and set pieces I have ever seen in a videogame.

So, when I found out I would be seeing actual gameplay from Uncharted 3 I almost lost my mind.

And then when I finally saw the footage I actually did lose my mind.

Hit the jump for our very early preview of Uncharted 3: Drake’s Deception. 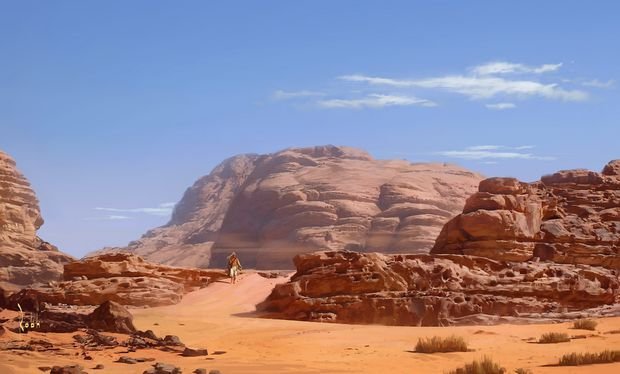 Before the demo began, Game Director Justin Richmond and Creative Director Amy Hennig gave us a presentation of statistics of the Uncharted series (game sales, critical reception, etc.). From here they segued into talking about why we were all there: Uncharted 3: Drake’s Deception.

The game — set to release November 1, 2011 (a.k.a. The Greatest Day EVER!) — will focus on Nathan Drake’s relationship with his friend (and fan favorite) Sully as they go on a world-spanning adventure to locate a mysterious lost city. This city — the obsession of both Lawrence of Arabia and Nathan’s own distant family member Sir Francis Drake — is referred to by many as Atlantis of the Sands (or The City of Brass) and will be the end goal of Nathan Drake and Sully. 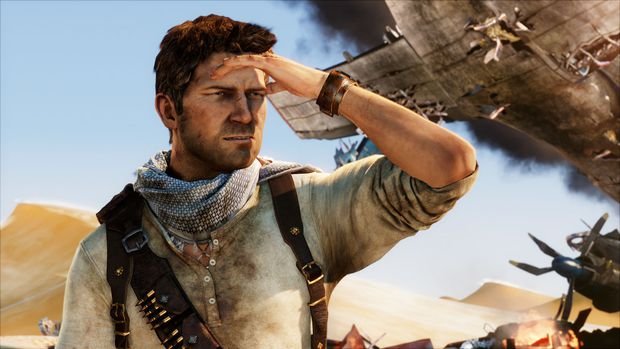 And this was an important talking point from Naughty Dog. They wanted everyone to know that this city was an end goal, just as the snowy peaks were in Uncharted 2 — meaning the entire game was not going to take place in just the desert.

After saying this, the crowd laughed. We knew this would most likely be true, but it was nice to hear Nathan Drake’s Uncharted 3 adventure would be just as globe-trotting as it was in the wonderfully varied Uncharted 2.

And with this, the gameplay demo began.

Unfortunately, we didn’t get a playable hands-on with the game (at least, not yet), but everything we saw was completely in-game. 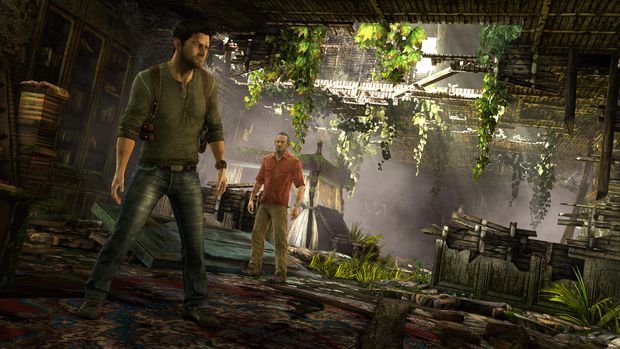 The demo takes place in a dilapidated chateau in the forests of France. Nathan and Sully are searching for clues to find the City of Brass and run into a group of goons working for a mysterious villain — a villain Naughty Dog says “manipulates through fear” and is “unlike anyone Drake has ever encountered before.” Intriguing!

When the demo began, a smile formed on my excited face. Everything looked just like Uncharted 2, which could not have made me happier.

Before starting, Naughty Dog gave us a quick breakdown of some of the new features added to the single-player campaign. Aside from everything looking and feeling even better than previous games, small details have been added to Uncharted 3 to make the presentation and gameplay feel even tighter.

For one, in Uncharted 3, Drake can now perform context-sensitive stealth kills with the press of a button. At the very start of the demo, this was shown off when Drake snuck up behind a guard one floor above him. As he got close, the triangle button popped on the screen. After pushing it, Drake jumped down one level directly on top of the guard, knocking him out instantly.

The stealth kill is a small addition, but really helps the gameplay flow perfectly from one section to the next.

After knocking out the goon, Drake and Sully both perform some classic Uncharted moves all over the chateau. They climb rafters; they shimmy along small ledges. And as you would figure, this all plays and animates beautifully.

But then the real fun begins. 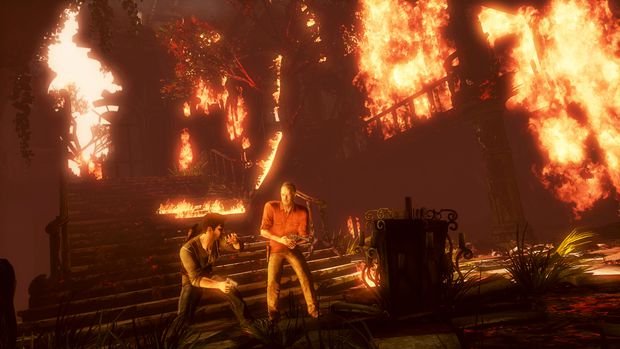 At one point, the guards spot Drake and Sully and start screaming various things at each other. One guard runs in with a torch and sets a curtain on fire. Immediately, the fire starts spreading up the wall. It is important to mention that the fire is happening in-game (it’s not a cutscene) and it looks absolutely incredible.

Panic sets in, so the goal of the rest of the demo is to get Drake and Sully out of the quickly burning chateau alive!

You can only imagine how cool all of this is. 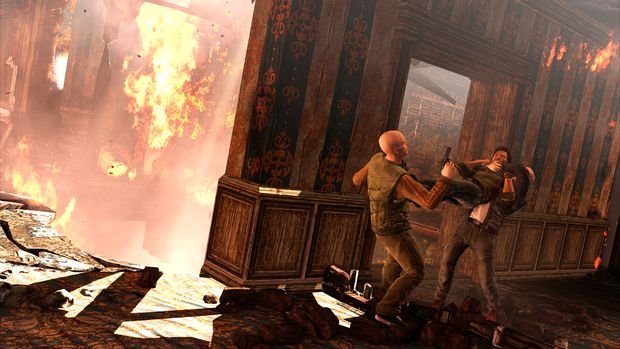 After the demo I asked one of the Art Directors on the game if the fire spreads when Drake enters triggered points in the level, or if it just spreads naturally — meaning: if Drake doesn’t move he will eventually just die as the fire reaches him.

Unsurprisingly, the fire is triggered by points in the level, but this is in no way a negative. And this is what makes Uncharted stand out as a series in my mind.

In most games, levels with fire are already completely on-fire as you enter them (think Strago’s house in Final Fantasy VI). In Uncharted 3, the chateau environment is huge, and the fire literally starts as a tiny blaze from a torch.

The action in the burning chateau is so fast-paced — and Drake and Sully are doing so much — that you don’t even notice that the fire is spreading and constantly filling the level. It all happens so seamlessly that you really feel as if the building is burning naturally. It is pretty ingenious. 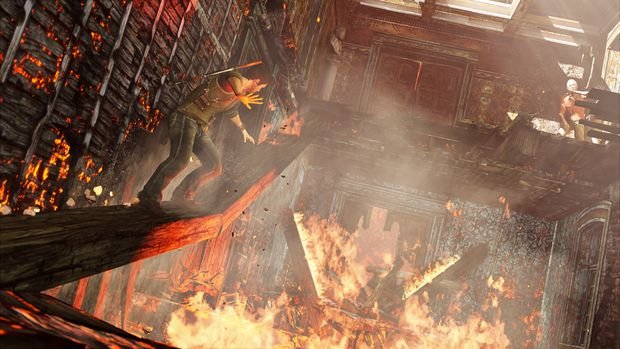 The rest of the demo showed off classic stuff that makes Uncharted so great: Drake and Sully navigating ridiculous environmental obstacles while fighting guards at the same time. And I am not kidding when I say ridiculous. There is not a moment to breathe in this entire sequence!

At one point Drake is running along and the entire floor collapses under him. While sliding down the floor, he has to proceed to shoot guards while also making sure to jump at just the right moment to avoid an instant fiery death.

At another point Drake is hanging on the side of a wall while fire starts to surround him. He must jump from hanging point to hanging point as the camera swoops underneath him. Suddenly, the ceiling starts collapsing and Drake is forced to also dodge the falling debris. The entire demo is filled with many brilliant heart-stopping moments like this.

But my favorite parts of the demo — in addition to the dozens of “HOLY SH*T THAT WAS COOL!” moments — were the small details and creative interactions with Sully. 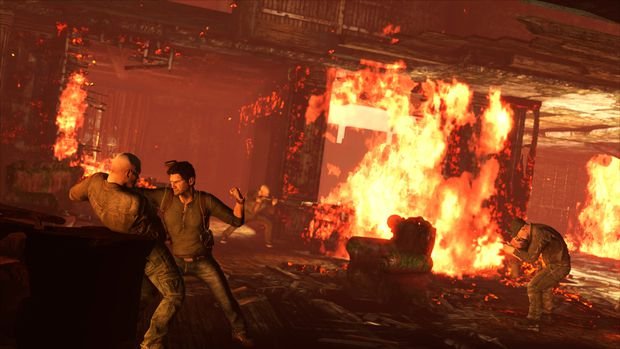 Basically what this means is Drake’s in-game character reacts to things around him in very realistic ways. When he runs through a small hallway, he may reach his hand out to touch the wall. When he turns a corner, he may lean a little or grab a nearby object for balance.

Most impressive to me was the way he reacted to the fire. If Drake ran to close to flames, he would hold out his hands just like a person would to shield himself from the heat. In addition, he would sometimes cough when running next to a patch of smoke.

Keep in mind that this all happens in-game and looks incredible! When you run through the level you may not notice these subtle details, but, once you do, you will be blown away by how amazing it makes the game look and feel. Kudos to Naughty Dog for really pushing the limits of how in-game character models move and react in videogames.

The other thing that impressed me was Drake and Sully’s interaction throughout the level.

In line with Uncharted 2, Drake and Sully offer witty banter as they are traversing the level. Drake was the only character playable (more on that in a minute), but Sully follows close behind, offering assistance when needed. 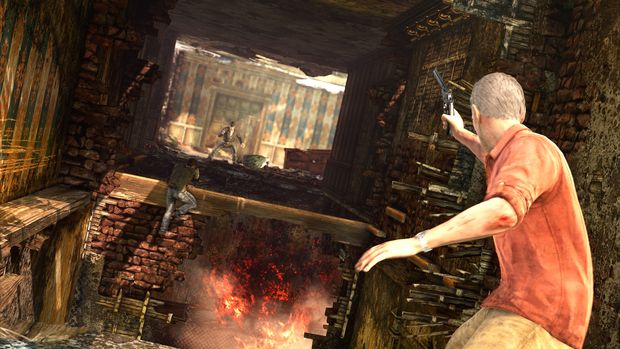 At one point Drake’s foot got stuck in a stairway. Since everything in the demo happened in-game (there were few non-playable cutscenes), enemies still continue to attack Drake, even when his leg is stuck.

During this sequence players have to shoot the approaching enemies without being able to run around. Once Sully frees your leg things go back to normal.

Minutes later, Sully is climbing along a wall when it collapses, leaving him hanging on for dear life. Not only does Drake have to quickly reach him before he falls, he has to do so while fighting off approaching guards.

I know, I know — a lot of this sounds like an escort mission, which, in most games, is super annoying. But it NEVER once feels that way. If anything, the interaction between Drake and Sully is perfectly smooth and brilliantly executed. It actually felt like a dance at times, as both characters were jumping and swinging around this crazy burning chateau, performing seamless acrobatic moves together. It was all rather stunning.

No word on whether the entire game will include Sully by your side, but Naughty Dog did emphasize the story focuses heavily on their relationship. Something tells me Sully is going to be in the game a lot. 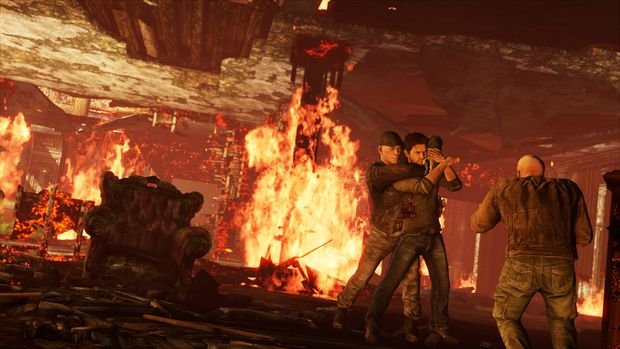 Which leads me to speculate: Does this “jump forward in multiplayer” Naughty Dog has been repeatedly saying have anything to do with a possible co-op mode? I don’t know the answer — and Naughty Dog would not say anything — but I think co-op could happen.

How do I feel about this if true? Well, I am a single-player guy, and Uncharted 2 worked so well because of its strong single-player mission, so … I would rather play alone in the main adventure.

But Naughty Dog is a group of geniuses, and I trust they will do what is best for the game. If co-op does exist, maybe it will be a secondary mode or side-story. I would completely support that.

But, again, this is all speculation and may not be true in the slightest.

What’s most important, though, is we were unbelievably impressed from what we got to see in the burning chateau gameplay demo. Uncharted 3 looks great, it runs smooth, and it feels exactly like an Uncharted game should feel: exciting, breathtaking, and super slick.

Uncharted 3: Drake’s Deception is my #1 most anticipated game of 2011, and, after seeing this demo, the excruciating wait just got that much more torturous. 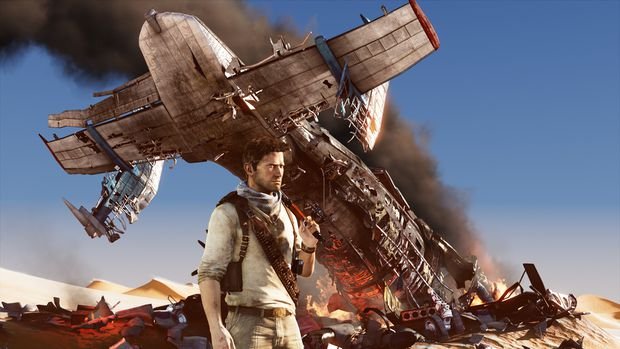 Oh look, here is some direct-feed video of a piece of the demo! This is only a very small percentage of what we got to see — the rest of the sequence is much more mind-blowing — but there is still some cool stuff in here. Enjoy!