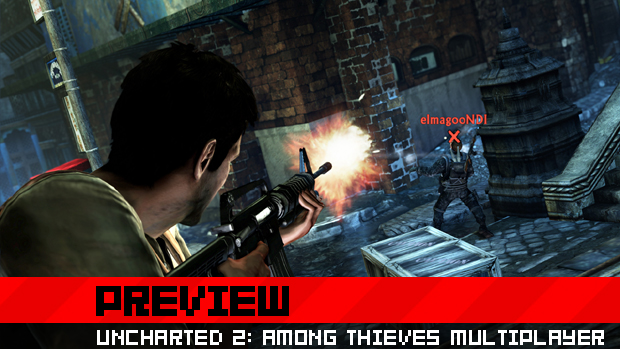 I was a bit late to the party when it came to Uncharted: Drake’s Fortune, having only played it in the last couple of months. It’s clear to me why the game is so beloved among PlayStation 3 owners, as the high-octane action never stops once it gets going, and the title is easily one of my favorites for the console.

When I went to Los Angeles last week to attend Sony’s Gamers Day, I was aware that Uncharted 2: Among Thieves was to be a major part of the festivities. But that was about the extent of my knowledge. Imagine my surprise when Naughty Dog confirmed the game’s rumored multiplayer content, and announced that we would be able to play a considerable chunk of it over the next few hours.

How does it all shake down? I suppose you’re going to have to click the link below to find out.

I’m going to start by pre-empting what some of you may be thinking, in the hopes that the brief moment where the page loads (but hasn’t jumped down to the comments yet) will allow me the chance to save you the effort of making unnecessary and obvious comments.

No, Uncharted is not a game that needs to have a multiplayer component by any stretch of the imagination. Yes, I think it’s pretty damn stupid that so many developers have watered down what could be a compelling single-player experience, because they feel that games which lack multiplayer gameplay will not be as successful in the marketplace. No, I haven’t watched the new G.I. Joe animated series yet, but I totally swear I’ll get to it later this week.

Have I covered everything? Great. Let’s move on.

Multiplayer in Uncharted 2 is represented by two different, yet equally important, modes: The competitive games where players mercilessly slay one another, and the cooperative component which gives players the chance to work together. Yes, I just summed up practically every AAA action game with online play released in the last few years.

So what’s to set Uncharted 2 apart from the competition? Let’s take a look at the co-op play first. Rather than shoehorn multiple players into an experience intended to be played alone, Naughty Dog has opted to create a series of levels which are unique to online play. Three people can play together, taking control of Drake, Sully (yep, he’s back) and the new femme fatale, Chloe.

In the level on display at Gamer’s Day, the trio were making their way through a war-torn city, chaos surrounding them. Teamwork is required at various points in levels, with multiple people necessary to perform tasks such as upending a bookshelf to use as a ladder. But the real advantage to working together is simply in keeping yourself alive.

Players can revive fallen partners, as is seen in many other games. Thank God for that, too, as the combat feels particularly brutal in this mode. Swarms of enemies attacking from fire escapes, from within buildings and taking cover behind wrecked buildings frequently make short work of players. Having a third person around to revive the other two almost feels like a necessity instead of a feature.

The co-op feels tight and fast-paced and, most importantly, is quite fun to play. The separation of these missions from the main game may be smart from a logistical standpoint. I do wish that they had either gone all or nothing in giving players the opportunity to play through the main story with a buddy or two. They run the risk of giving the impression that the mode was tacked on, a concern which will probably only be assuaged with the knowledge of exactly how much cooperative content will ship with the game. For the time being, however, I’m very positive about the experience.

Two competitive modes were on hand for demonstration as well — Team Deathmatch and Uncharted 2‘s version of Capture the Flag, “Plunder.”

Team Deathmatch is a ton of fun. Teams are separated into “Heroes” and “Villains,” and the two levels on display featured truly excellent design. In the ten-player sessions which went on during the demonstration, it was rare to have a moment in which you were not constantly in a heated firefight. Cover is plentiful, and jumping into and out of it feels very fluid and exciting.

Weapon variety, ranging from pistols to an absolutely devastating minigun, is excellent. The new mechanic for thrown weapons — grenades essentially travel directly to the point your aiming reticule is looking at, with the push of a button — makes them very effective and easy to use. If you need to get a little up close and personal, melee bashing is also an option. These strikes are powerful, but they’re not one-hit kills unless you manage to sneak up behind a foe, resulting in a highly satisfying neck snapping animation.

“Plunder” pits two opposing forces in a mission to acquire valuable treasures. A massive idol spawns on the map, and players race to bring it back to their respective home base. Collecting the idol really slows a players movement, and prevents any sort of evasive dodge maneuvers, leaving them in a vulnerable position. In addition, since you’re carrying this huge treasure, your pistol is the only choice if you have to fight back against those who would steal your prize. And the position of the idol is always apparent on the game’s mini-map, so stealth is not really an option.

At any time, the idol can be thrown in the same way as a grenade to free a player up in the event that they come under heavy fire. Lone wolf players will have a hell of a time staying alive, even with this feature; teamwork is very important. There are some excellent strategic possibilities in the gameplay, be it as simple as protecting a player who attempts to carry the idol the entire way, or as complex as a relay system between multiple players tossing the idol back home.

“Plunder” is clearly my favorite of the two modes, as having that physical item as an objective point really focuses all of the action in a tight area, and cranks the energy level of games up to eleven. The restrictions forced on the player by having to carry the heavy object is a great balance, and reinforces the need for players to work together toward the common goal, unlike many other forms of the CTF game.

So, as I said before, there’s really no reason that Uncharted 2 needed a multiplayer component. In a way, Naughty Dog is taking a chance here by trying to appeal to that market. What they have shown so far demonstrates that they certainly have the potential to create a quality product, whether it be for one player at a time or many.

There is nothing that is staggeringly original about what has been shown, but they have managed to translate the action and excitement of Uncharted to a multiplayer experience. Both co-op and competitive games are exceedingly fun to play; that’s a good thing. What remains to be seen is how much of a good thing they can deliver when the time comes for Uncharted 2 to release. So long as they don’t skimp on providing a lot of entertaining levels and scenarios, while continuing to provide a single-player game which meets the standards of the first title, I see nothing to complain about so far.

With the beta coming soon, players will get their chance to judge for themselves; I highly recommend that you check it out if you can get in. I have a feeling that a lot of gamers are going to be pleasantly surprised by the result.