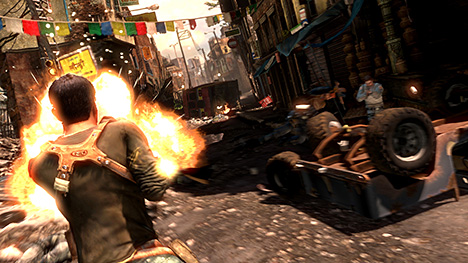 “Oh! Is that an ancient Tibetan ritual dagger in your pocket?”
“Well, maybe I’m just happy to see you.”

As I’ve said many times before, Uncharted: Drake’s Fortune was my favorite PlayStation 3 exclusive of 2007. To this date, it’s still one of the best-looking games in console history, but its pulp action storyline, well-drawn characters, and fun platforming/combat gameplay are why I find it so memorable.

So I’ve been looking forward to its sequel, Uncharted 2: Among Thieves, ever since it was announced. Last Friday, I was given a demo of a level from the game at a restaurant in midtown Manhattan. The above lines came from a cutscene at the end of the demo in which Chloe Frazer, a sexy Australian treasure hunter who seems to be our hero’s new squeeze, leaped into Drake’s arms — so Naughty Dog has certainly brought back the first game’s trademark humor.

But is Uncharted 2 just more of the same gameplay-wise, or does it improve on the original? Hit the jump to read about what I saw. 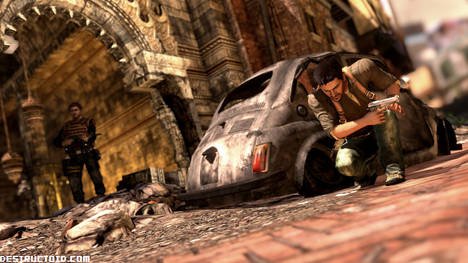 The level that was shown to me by Sam Thompson, a producer at Sony, took place in a war-torn village in Nepal — the same one we’ve seen in screenshots. Sam told me that Naughty Dog is interested in historical fiction: taking cues from real events or people and then crafting a “what if” tale from those starting points. In the first game, there was the connection to Sir Francis Drake and the fabled treasure of El Dorado. Uncharted 2 is set about two years after the original, and this time around, Nathan Drake is after the lost riches of legendary Italian explorer Marco Polo.

What is actually recorded in history is that Polo left Kublai Khan’s court for home with 14 ships containing over 600 passengers (and a whole lot o’ loot) sometime around the year 1292. But by the time he reached Venice in 1295, all that was left was a single ship with 18 travelers. The story of Uncharted 2 seeks to fill in the gap with a tale about a previously undisclosed journey that Polo supposedly made to Shambhala (aka Shangri-La) to find the Cintamani Stone, a magical jewel that is revered in Buddhist and Hindu traditions. Nate and Chloe aren’t the only ones looking for it, though; a military organization headed by a war criminal is also after the priceless gem. 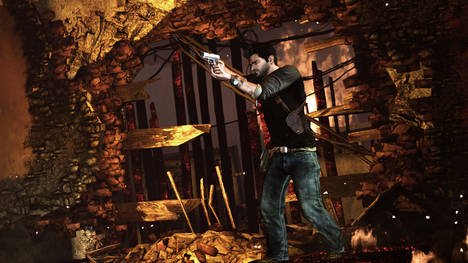 The demo opened up in the aforementioned Nepalese village, which had been blown to bits by the bad guys in their search. The scene was filled with rubble and detritus, which, of course, makes for great cover if you’re trying to take out some military personnel. After a few stealthy takedowns and gunshots, a bus exploded, blocking Drake’s path. Of course, as Sam explained, “The rule of Uncharted is: when in doubt, climb,” so he hopped up and grabbed a signpost. Climbing has been revamped: you don’t have to hit X every time you want to move; instead, you just use the analog stick to reach for new places. Of course, you’ll still need to press X to jump gaps.

Regarding climbing, Sam also noted that Naughty Dog implemented something that they’re calling “traversal gunplay” — that is, you can fire your weapon from any position, whether you’re behind cover, climbing a wall, or hanging off a streetlight. This doesn’t just apply to you, though; your enemies will also make use of it, so they won’t just be waiting for your bullets while they’re moving around the environment. Here’s where Sam took some time out to assure me that — contrary to the worries of gamers everywhere — Naughty Dog didn’t want to force stealth on anyone. You can go in guns a-blazing, but if you want to proceed like a ninja would, the option is available to you (unlike Drake’s Fortune, all the other enemies in an area won’t magically be aware of you once you take one of them down — unless, of course, they catch you in the act). 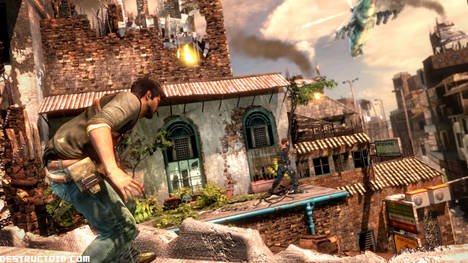 Speaking of the environment, the next part of the demo showed off a very cool use of it. Sam approached a soldier patrolling a ledge with his back turned while a helicopter buzzed loudly overhead. So instead of taking him out from afar, Sam jumped for the ledge instead; the helicopter drowned out any noise Drake made when he caught the edge of the building. Once the paratrooper came a bit too close to the ledge, Sam grabbed his leg and yanked him off the structure, tossing him to a certain death below. Pretty bad-ass, eh?

Afterwards, Sam crossed a gap on a narrow wooden plank. When I asked if there was Sixaxis control involved, Sam said no (just analog stick balancing) — they’re still deciding whether they want to integrate it. At this point, it’s not used for throwing grenades, either. Right now, grenade throwing is a “no-look” process: placement depends on where the center of the screen is pointing and how long the button is held. 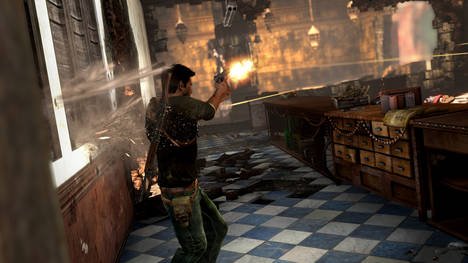 Throwing a grenade is what kicked off an intense firefight, with bullets whizzing by Drake’s ear and chunks of wood and concrete flying everywhere. I noted that in the first game, I used the semi-automatic pistols nearly all the way through, since the recoil on the automatic weapons was too much to bear. Sam assured me that there would be a greater variety of firearms in Uncharted 2, so hopefully I won’t have to stick to the 92FS. During the battle, Sam came pretty close to dying, with the screen going black and white and a heartbeat being audible, and that’s when he told me about the new enemy AI:

Eventually, he was able to recover and finish off some foes, and he went and picked up a riot shield off a downed enemy. There’s a trade-off, though — Drake was slowed by the heavy hunk of bulletproof metal. At this point, Sam addressed a common complaint about the first game — namely, that it took too many bullets to bring enemies down: “Enemies in the game are lightly armored, moderately armored, and mostly badass,” so in Uncharted 2, you’ll have a much better idea of the amount of ammo you’ll need for different types of opponents. 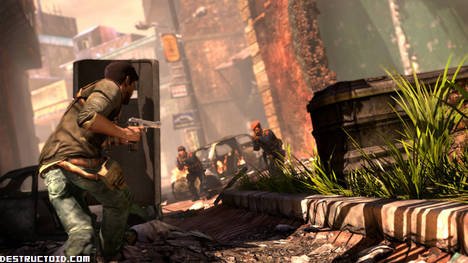 Just when it looked like Drake had cleared the area, a truck full of reinforcements screeched into the scene — but thankfully, Chloe showed up and took out the vehicle with an RPG to save Drake’s ass (“an ass worth saving,” as he pointed out). This was followed by the lines I quoted at the start of the preview, and then some sexual innuendo about going to a hotel; it’s obvious that Nate and Chloe have pursuits aside from historical relics.

Sam also gave me some background on Chloe. She’s every bit Drake’s equal — similar to Elena, she’s no mere damsel in distress — but “her moral compass is much different than his.” In fact, Chloe is pretty much amoral; she’s willing to do anything and everything to attain her goals, and that gives Drake pause. I’m definitely intrigued by this, since it could provide some very interesting turns in the story. 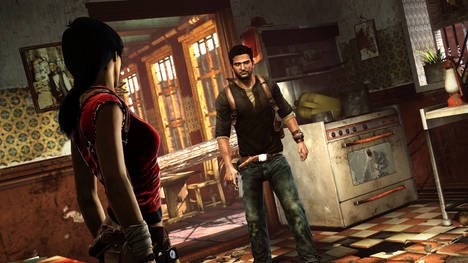 And that’s what’s at the heart of the Uncharted franchise, according to Sam: ultimately, he told me, the driving force is the story. If gamers don’t care about the cast of characters and what’s going on, they’re not going to be compelled to continue. So not only does the presentation have to be cinematic and the gameplay spectacular, the story has to keep gamers enthralled. The first game succeeded because of its “everyman” characters and (mostly) believable situations, and it seems like Uncharted 2: Among Thieves will do that when it releases this fall, exclusively for the PlayStation 3.