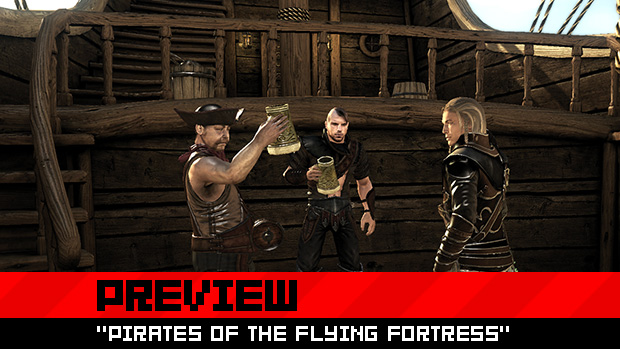 The expansion for Two Worlds II is around the corner, but how does one do a pirate-themed expansion for a pretty large open-world role-playing game? It turns out you do it by adding a lot of new content to play with and play through, a new story, and a laarrrrge update on the tech side.

With a new area added to the existing world, Two Worlds II: Pirates of the Flying Fortress will take you on a side adventure with a pirate theme. 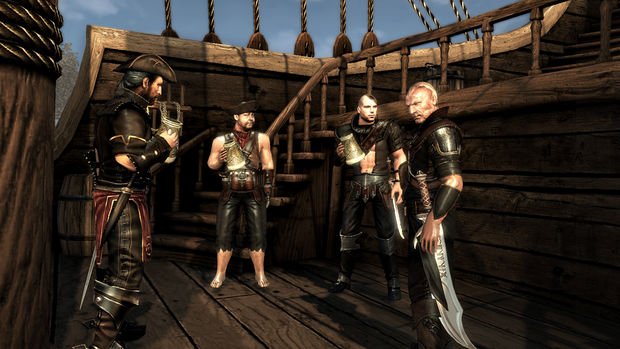 Pirates of the Flying Fortress is about a group of pirates who have been stranded on a cursed archipelago, trapped for all eternity until someone comes along to resolve the situation.

Reality Pump has been working on a lot of improvements to the engine used in Two Worlds II, and the expansion looks really nice. There’s better lighting with real-time refractions and better fluid dynamics for the water (what’s a pirate game without water?).

Some gameplay elements that were scrapped or not fully implemented in Two Worlds II were put into this expansion, such as the Oculus, a flying eye. While walking around an area littered with petrified soldiers, you come across a basilisk. Hiding out of the beast’s sight, you can use an Oculus to fly around to the basilisk’s eyes and subsequently burn them to blind it. After doing so, it becomes safe to attack it as you would ordinarily do. 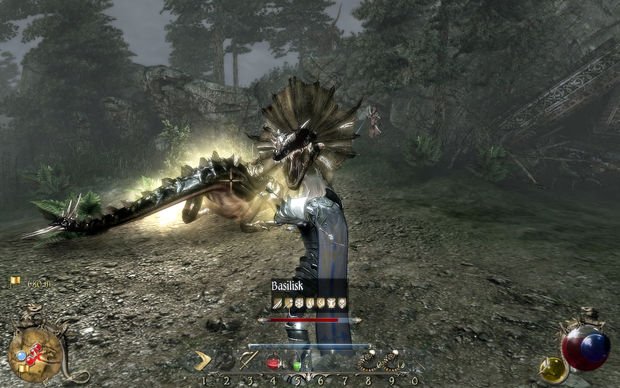 New weapons like a crossbow and pirate swords fill up the pirate atmosphere, although it seems to be more of a really large side quest to Two Worlds II than a standalone kind of expansion where you are a pirate yourself.

There is still some trademark ridiculous stuff in here, though, such as an undead bar filled with skeletons, zombies and mummies that has its own quest line. Find an eye for a rotting zombie, and he will give you a leg to trade it at another character. If you complete this quest line, you gain access to a VIP area, which is a smaller version of Mass Effect 2‘s Afterlife club, but with naked female zombie dancers.

A music minigame from Two Worlds II has been expanded a bit and you can play music to activate certain things. One of them was a Golem that you could wake up, who had tons of armor until you pull four levers in the room.

Besides walking and riding your horse, you can now use a boat as a mode of transport between the islands that make up the archipelago world of PotFF. It’s not quite a full-on pirate ship with cannons and a crew of scurvy dogs, but then again, this is not that kind of game. Another key feature of the game: horse armor. Yep. 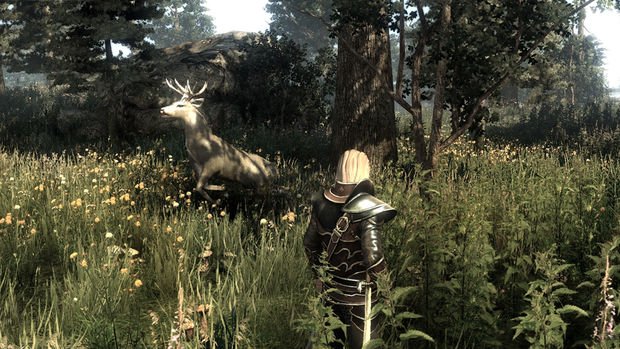 During a section in which you are playing through a dream, the camera has a slight fish-eye point of view with a bunch of post-processing effects to make it look more surreal. Small things like this on the graphical side will be all over the place.

Two Worlds II: Pirates of the Flying Fortress will also be the first open-world RPG to feature stereoscopic 3D, which should please the 248.6 people who play games in 3D. The graphical tweaks will also be included in an update to the main game, so if you are more of a ninja fan, you’ll still be able to replay the main game with the higher visual fidelity.

It looked like PotFF will do what an expansion is supposed to do — add new content and some new gameplay elements — with the added bonus of all the work Reality Pump has put into the engine to make it look really good. I don’t know if it’s going to win over people who didn’t care about Two Worlds II, but for the fans it should be a fun and better-looking expansion.