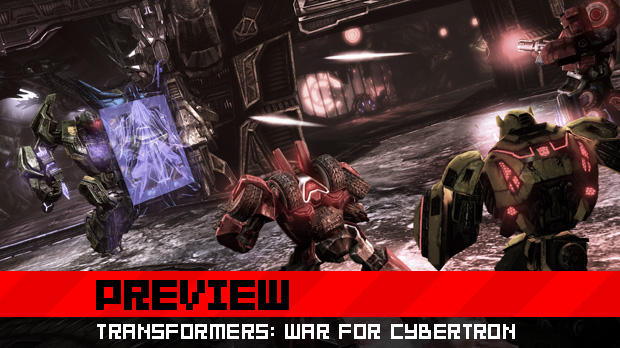 In an interview session last week, Matt Tieger, Game Director at High Moon Studios, told me something before I played Transformers: War for Cybertron in multiplayer mode. What he said struck me as pretty confident at first. But now it makes more sense to me. Now that I’ve played multiplayer in T:WfC, I’m actually right there with him. He told me that gamers just need to play this game to get how good the multiplayer is.

Tieger said it plainly: “The guy that is a third-person shooter guy? If he gets his hands on the controller for five minutes, I think he’s going to like it.”

Being fully aware of the game’s appeal to Transformers fans, I asked him give me his pitch to gamers that are into shooters, but not necessarily into Transformers. His response couldn’t be more direct: “I could have a great pitch, but the reality is that all I want them to do is f*cking play it.”

I get it now. I played it. It’s good. You’ve got to try this for yourself to see what I mean, though.

I played various multiplayer matches against other games press in both Team Deathmatch (10 players) and Conquest (5-on-5) modes. The controls are exactly the same as the scheme we went over in our coverage of War for Cybertron‘s single player mode. In short, the controls are mapped just like you’d expect in any third-person shooter save for the Transform ability, which is executed by pressing in the left analog stick. The twist in this game is that you’re free to transform at any time, and as many times as you’d like. Transforming gives you access to another set of abilities and weapons, adding another layer of strategy to an already option-packed multiplayer game. One of the many benefits to transforming is immediately obvious in multiplayer: transform into vehicle mode and you’ll be able to get away faster. Or get in faster. Zooming away as a fast car beats the hell out of running. Transforming into a jet and flying around the corner to rain fire down on the guy that was tailing you was glorious. 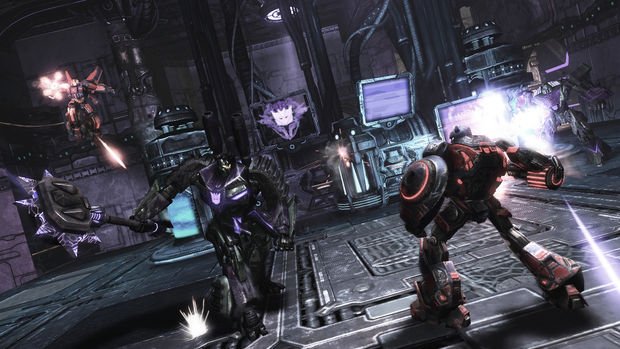 Outside of the transformation button, the rest of the control will require no effort on your part to pick up. It’ll come as second nature. If you’ve ever played Epic Games’ Gears of War, you’ve already got this game down pat, before even touching it. Thankfully, the actual balance, aim and move response also compare nicely to Gears of War. Also, when you change modes from bot to vehicle, the button mappings stay pretty much the same. You’re required to learn nothing, which really adds to the game’s jump in anytime feel. The key point to get here is that the control feels good. “Tight” and nicely “responsive” are probably the last words you’d expect to see in a Transformers game write up, but that’s really the case with T:WfC.

As you’d guess, you’ll play as either Autobots or Decepticons in multiplayer. One isn’t necessarily better than the other, as both have Transformer choices that fall under each of the classes. Early on in my session, most of that fun came from exploring how the game’s four classes work.  All class types have their own abilities, weapons and kill streaks. You’ll suit up by fully customizing your character before matches, tweaking everything from your skills to your bot’s colors. You’ll only get to pick two of the four available abilities before starting a multiplayer match, though. Most of my first several matches was spent picking the classes and seeing how their respective weapons and abilities worked. I could have spent much longer toying with them as playing and winning actually levels up your character, adding new powers and upgrades to the mix for you to slot in and try. 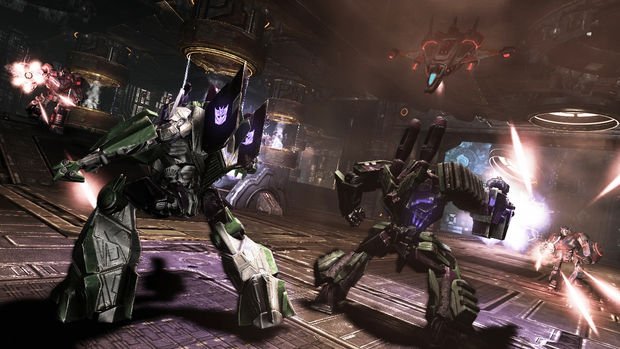 Here’s a quick rundown of the game’s four classes:

Scouts: Cars. They’re fast, but they can’t take a lot of damage, just as you’d expect with any scout class in a shooter. They have four weapons that are unique to this type, and you’ll choose two going into multiplayer. With this class comes expected weapons like sniper rifles. This class also has its own grenade, an EMP-type stun grenade. Like-minded abilities such as Cloak and Mark Target (show everyone your enemy location) make sense, but I like Decoy, which throws out something that looks like a helpful shield, but actually deals damage.

Scientists: These are Jets and probably my favorite class. As a scientist you’ll be the go-to guy for healing as you’re equipped with several healing powers, including your secondary gun which shoots a continual healing beam. As you’d expect, these guys rank low on the damage dealing chart. The grenade for this class is especially useful, as it drops a bubble of healing that your teammates can take refuge in. Keeping with the theme, Drain is one of the abilities. With it you can steal life from enemies and refill your own health. Disguise lets you change your colors to let you look like your with the other team. Finally, you can also spawn an AI turret to cover your back as you work on healing your teammates.

Leaders: Trucks. Bigger and badder than scouts. This is your well-rounded class. This is the class that lets you play with grenade launchers. Heat-seeking mines find your enemies for you. One of the abilities is a perk-based one called Warcry. It boosts the attack and defense values of any teammate nearby. A Forcefield Barrier can block incoming fire once your inside it. One of the meanest, Transform Disruptor, will throw an enemy out of their vehicle form and lock them out for a limited time.

Soldiers: Soldiers are Tanks. Tanks in the literal sense, too. These are the ones you want to use if you like the big, heavy guns. Soldiers have a lot of health and defensive power. You can Hover to increase all the damage you’re dealing, though you’ll be a bit more susceptible to damage yourself. Everyone liked Whirlwind, a 360 degree spinning melee attack. Like the Leader’s Transform Disruptor, Soldier’s Energon Sling locks enemies out of their abilities for awhile. 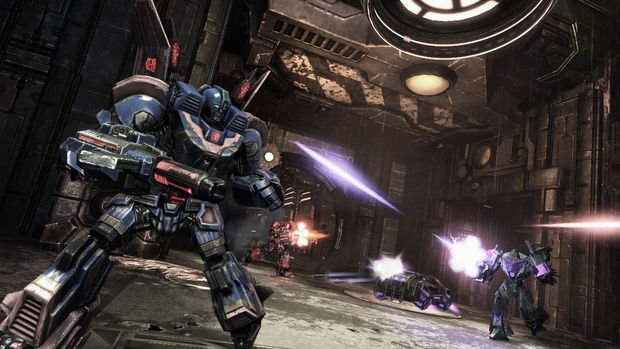 All of these classes got a workout in a variety of maps, all of which looked fantastic, just as the single player segment did. All of the maps I saw were small and tight, which kept the action very fast and hot. The Conquest mode was particularly fun with its multiple bases to defend and take over. Being a scientist sounds like a simple support role, but I found myself spread thin between manual healing, setting up AI turrets, taking a few bases of my own and watching my ass, all at the same time. Control in-fight was never an issue with the tight aiming and movement. Flying around in a Transformer that turns into a jet did take a few flights to get used to, but it quickly became second nature, and I quickly saw the fun of zooming around quickly and attacking from the air. Likewise, the on-the-ground vehicles don’t have the tightest turning radius, but this isn’t a racer, and having the control too tight would give you issues when aiming your weapons to fight back. This is a nice balance between control and usability in combat. If you’re not comfortable with all the switching right off the bat, know that on-foot players aren’t necessarily disadvantaged. The beauty of War for Cybertron is that the multiple modes for each class really leaves the game open for you to pick what best suits your play style.

For as much as I played, I felt like I only got a small taste of what multiplayer offers. Some fun stuff did make its way into the arena, though. One of Optimus’ weapons is this crazy ball that can be kicked into the action. Roll it into the enemy’s cam and they’ll be hit with both slow motion and stat debuffs. The action was so heavy that I also didn’t get a full taste of the game’s kill streaks, which come to you as a perk after three or more successive kills. I did witness Optimus’ 9-kill move. His chest opens up to release a guided bomb that can be controlled and detonated from a first-person view. Brilliant.

If you like gaming, if you dig third-person competitive multiplayer, you’re likely going to enjoy the multiplayer action in Transformers: War for Cybertron. Shooter fans these days are typically only looking for quality multiplayer gaming, and all of that is clearly on display here with good competitive action, lots of tactical aspects and plenty of skill-based options.  And vehicles? Hello! Team work, tight control, kill streaks — everything you’d want, and all of this is independent of the Transformers “skin” that is laid over the top. Under this fancy new Transformers skin is a the core aspects of a polished third-person shooter.  As you’ll see, I’m not even attempting to appeal to the Transformers fans. They can see that the franchise was fully respected, and they’re already sold. It’s the rest of you that should sit up and take notice.