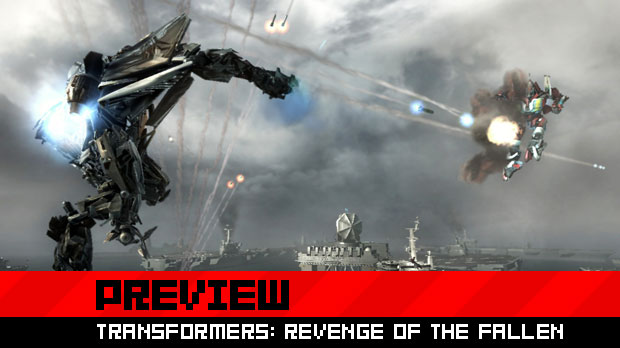 A few weeks ago, evil publisher Activision invited me to San Francisco to play X-Men Origins: Wolverine. At the last minute, I was also treated to a first viewing of another big movie license due to hit this year, Transformers: Revenge of the Fallen. It’s based on the sacrilegious Hollywood movie franchise, and it’s due out this Summer.

I got to peek at some first footage of the game, as well as get my hands on some fresh details and get a glimpse of a particularly … devestating … boss. Yes, the first game was absolutely terrible, which isn’t surprising considering the source material, but how is Revenge of the Fallen shaping up? Hit the jump to find out!

It may please you to know that the developer Luxoflux at least half acknowledges that the last game wasn’t all that great, although they didn’t say it in so many words. Instead they urged that they listened to the “huge amount of feedback” from the last title, and will be building upon that feedback for the sequel.

Revenge of the Fallen is a mission-based title in which players can choose to battle as either an Autobot or a Decepticon. Based on the events of the movie, the Decepticons are reeling from their defeat in the original film, yet have remained on Earth and are making insurgent attacks with increasing ferocity. You’ll be taking part in timed missions to assist either side.

One of the biggest selling points of Fallen is the fact that this game will have more playable Transformers than any other game based on the license to date. While Luxoflux refused to give an exact number, one is led to believe that it’s a lot.

From what I could see, the missions were fairly standard, and take place in city areas that have a sandboxy feel to them. The game is reminiscent of recent Incredible Hulk games, especially in the way the Transformers climb up buildings and tear the city apart. In one piece of gameplay, Bumblebee had to rescue Sam from a group of attacking Decepticons, then escort him to a safe place. The escort animations were pretty cool, with Bumblebee holding Sam while running, tossing him onto his shoulder while climbing, and seating him inside the car while transforming.

Transforming will obviously be a big part of the game, and missions are designed to ensure players make full use of it. Transformations are fluid and you can easily switch between your robotic and vehicular mode on the fly. Transforming also gives you a bit of a speed boost if done right, and the levels are designed in such a way that switching between your two forms is essential in order to get a good clear time.

Each of the Transformers will have their own unique abilities, along with their own vehicular transformations. We were shown a brand new character, Sideways, who acts as a sniper and can zoom in with a powerful weapon and also drop proximity mines behind him. Each character should play quite differently from the others, although it seems that a couple may share a few abilities here and there.

As well as ground-based combat, there will also be plenty of airborne missions. Luxoflux chose to show off my favorite character, Starscream, but annoyingly muted the voiceovers so we couldn’t hear him speak. This hints at something Activision and Dreamworks don’t want us to know about the Decepticon second-in-command. Teasing, but aggravating, since Starscream is obviously the best Transformer of all time. The air combat looked pretty good though, although it was quite chaotic.

To be honest, all the combat looks very loose and clunky, which works with the idea of giant robots, but it might lead to a gameplay experience that’s a pain to control. I’m also not too hot on the idea that your weapons will need to cool down after extended use. That never tends to work out too well in an action game. Luckily you can power up a meter which, when full, makes you invincible and allows you to attack with no cooldown required.

At the end of the video demonstration, a huge boss was teased, which every attentive student will know as Devastator. As with most of the Michael Bay Transformers, it looks absolutely ridiculous but he dwarfs even the largest transformer, and it seems like he’ll be an incredibly intimidating boss. Unfortunately we were shown no gameplay, they just let the robot crawl forward a little bit and then paused the game.

A huge focus will be put on multiplayer this time around, but only scant details were provided. Judging from what we saw of the single player game, it will be messy and unrefined, but should actually provide some fun. We’ll have to wait and see on that count. Judging by the way the developers were acting, I’d say it may be possible that the game also includes some bonuses such as Generation 1 skinsets and other nostalgic goodies for longtime Transformers fans. However, that is rudderless speculation and not fact.

Overall, it looks pretty good in motion. The graphics are as impressive as you’d expect, especially the transforming animations, and the action, while appearing rough around the edges, looks like solid fun. Until I get my hands on the game personally, it’s hard to say if the game will play as good as it looks. Initital impressions are hopeful, if tentative. We’ll be on hand to provide a full preview as and when we can.

Make sure to check out our gallery, which not only has screens from the Xbox 360 version we saw, but images from the DS and Wii versions, which are being separately developed from the ground up for their respective platforms.