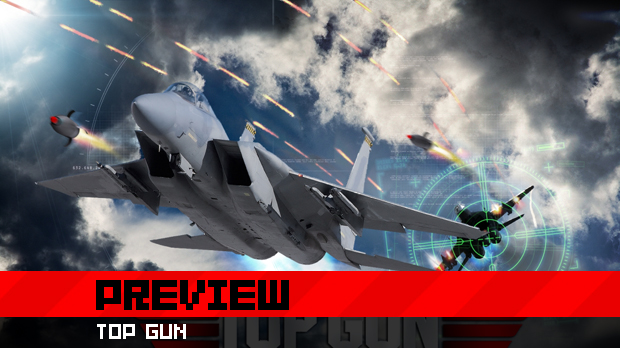 Top Gun is a 3D on-rails flight sim for the iPhone. The game takes place after the events of the Top Gun movie as Ice Man and Maverick are now instructors teaching the next batch of fighter pilots. You’ll be playing as one of the new recruits as you take on enemy planes and deal with Ice Man and Maverick’s sexual tension.

Flyby past the jump to see what Top Gun is all about.

Top Gun (iPhone)
Developer: Freeverse
Publisher: Paramout
To be released: May 2009
The game is on-rails so all you have to worry about is maneuvering the plane/reticule on the screen with the accelerometer. It felt a lot like Star Fox, just minus the motion controls … and furries. The motion controls felt extremely natural. Just simple nudges with my hands in whatever direction would move the plane to where I needed it to go.

Your plane will have two weapons — the Vulcan cannon and missiles. To use your missiles, you’ll first have to move your reticule over a enemy plane that’s flying in front of you. Once your target is locked on, you can launch your missiles. Targets will remain locked for a few seconds giving you a chance to lock on to three more planes. This allows you to fire a volley of missiles at once, otherwise you’ll have to wait until your missile hits a target before you can fire off a missile again. The Vulcan cannon is your plane’s machine gun. Seeing as how both set of weapons have unlimited ammo, it almost seems pointless to use the Vulcan cannon at all as I felt it was kind of hard hitting anything with it.

When you’re engaged with enemy ships, you’ll have to avoid the Danger Zones. Danger Zones is a little warning box that pops up to indicate that a missile is about to hit a certain section of your screen. You can stay in the Danger Zone for a few seconds to gain more points, but you’ll get hit if you stay in for too long.

The story begins with the new recruits going through some training exercises. Half-way through the exercise, the recruits are engaged by enemy planes and shit gets real. There are ten missions all together with different objectives in each. In the first mission, I was tasked with destroying a certain number of enemy planes to clear the way for a Bomber to take out an Air Craft Carrier. The mission took less than five minutes to complete.

I was really impressed with the graphics on Top Gun. I never realized that the iPhone could put out such pretty visuals. Freeverse is really pushing the iPhone hard with this game. The only complaint I can see most people having is with the HUD. There’s a lot going on as it is, but when multiple Danger Zones pop up, it becomes a giant annoyance.

Fans of the original movie will also be happy to know that a lot of the music from the movie is in Top Gun the game. Oh yes, Kenny Loggin’s “Danger Zone” will of course be in the game. There’s no price point yet, but hopefully it’s under $3. If the first mission is any indication, the overall game/story is going to be rather short.