As I smashed a girl’s face in with repeated blows by a hammer to the point where it resembled a dropped plate of lasagna more than the visage of a human being — a human being with a family, fears, and ambitions — I remembered that I rather like The Walking Dead.

I’ve grown jaded with the license after slogging through the second season of the show, which I don’t think is particularly good, but a couple of years ago I read through the first compendium of the comic while sitting in a waiting room. I remember finding some interesting stuff there, though it ends right before the prison, where I’m told things get really crazy. Playing through the first episode of Telltale’s upcoming five-part The Walking Dead videogame reminded me why I dug the original story. 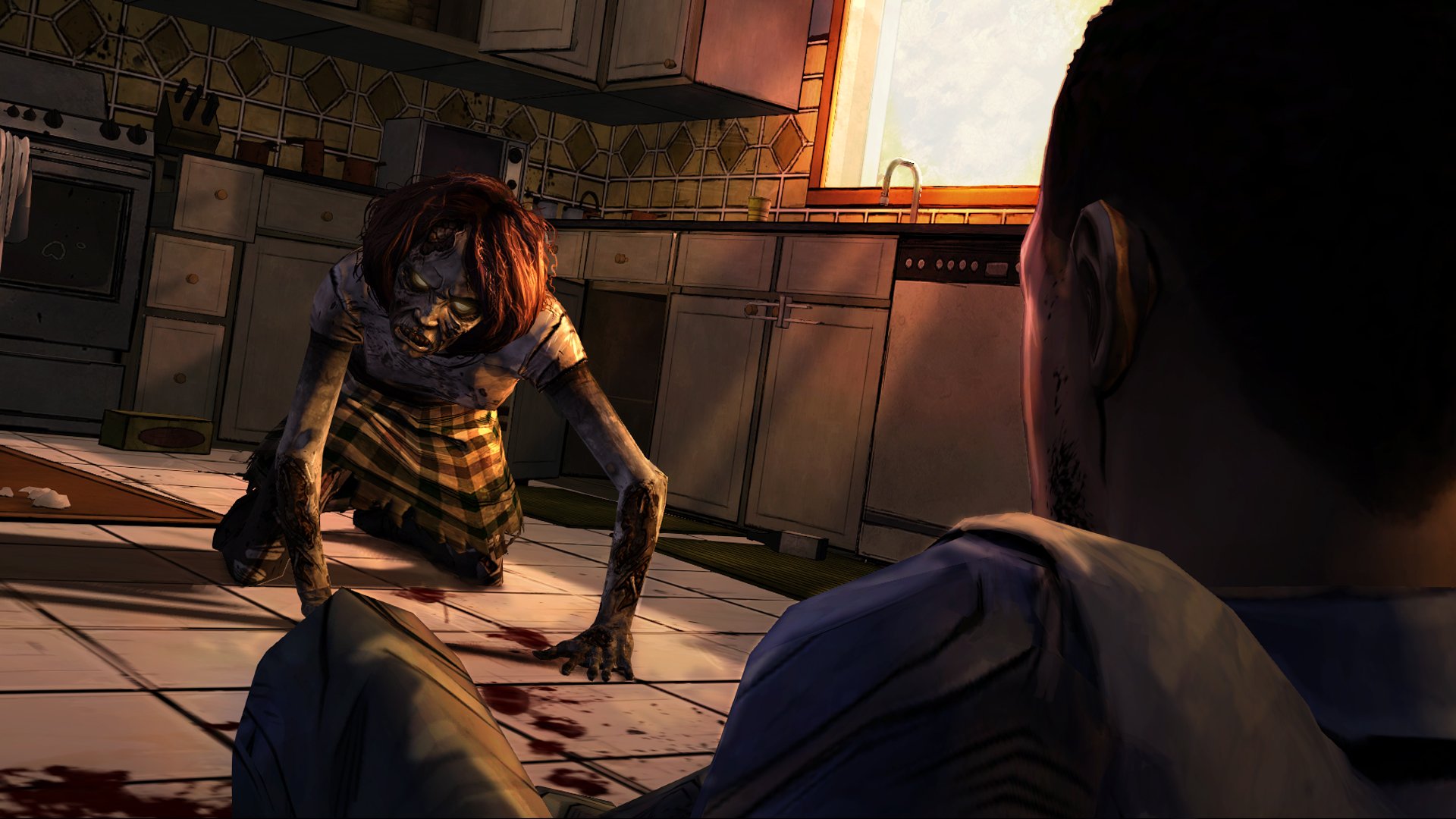 Much of the diverse Walking Dead fan base has been clamoring for a videogame adaptation for some time now, but typically in the realm of open-world, third-person shooters or survival horror games, not Telltale’s staple neo-adventure gameplay. The episodic, character-focused, narrative-driven source material, however, meshes well with Telltale’s and, as I discovered playing through the first episode, is a rather nice fit.

The game opens with you in restrained control of Lee Everett, a former professor at the University of Georgia now sitting in the back of a police car, on his way out of Atlanta and toward prison (yes, that prison). After some silence, the officer driving you professes, “Well, I reckon you didn’t do it,” alluding to your uncommon reticence pointing toward a clear conscience, and thus your dialog options begin, showing up on the screen and activated by pressing one of the face buttons on the controller in a timely manner (there’s a small bar below them denoting how much time you have available). In an interesting, welcomed move by Telltale, an ellipses standing in for silence is also a valid response. 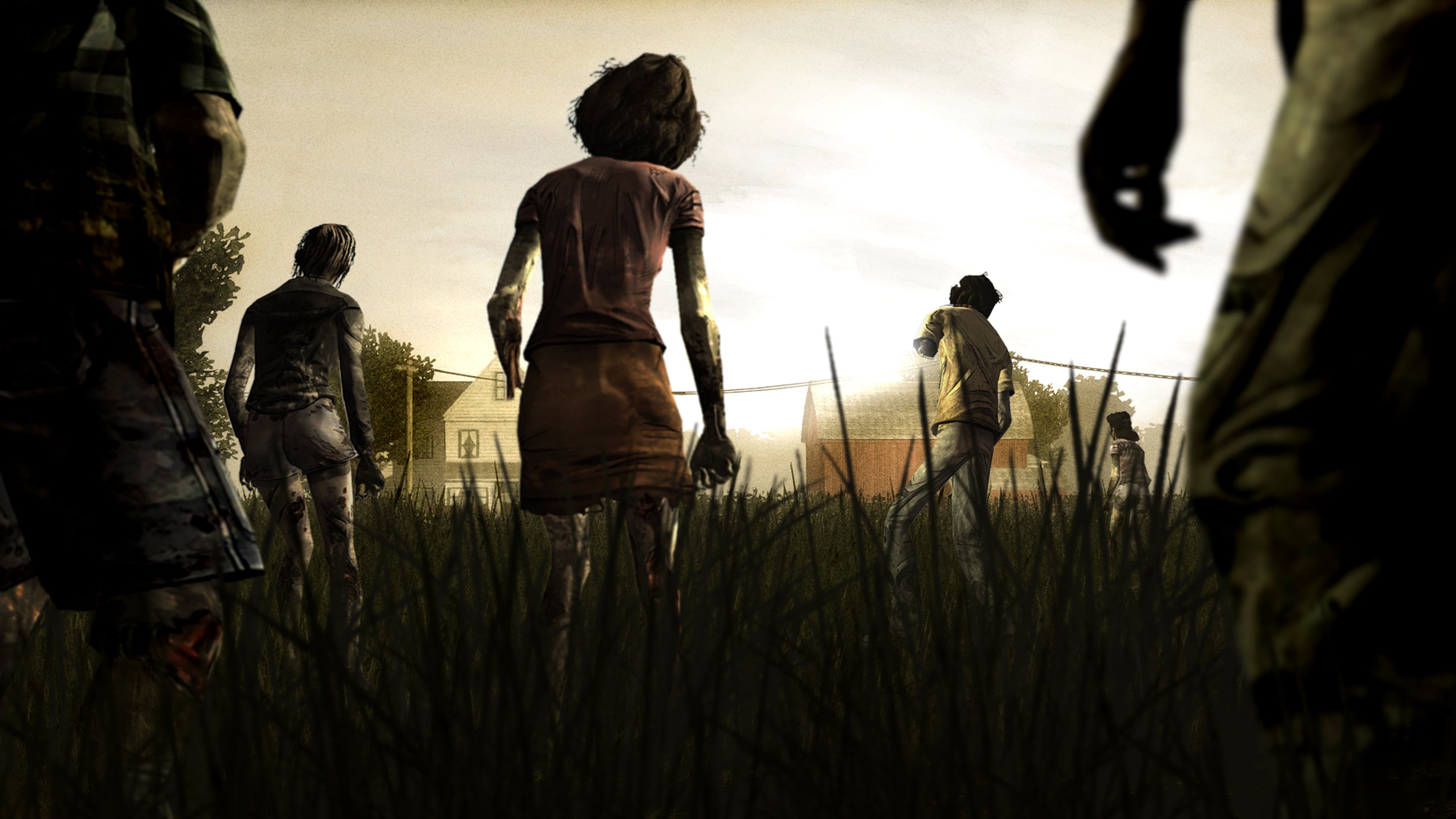 The scene works quite well at setting the tone and pacing of the game, which are meant to emulate the comic. In fact, the game is considered canon (Robert Kirkman signs off on everything) while telling its own unique story (with characters and locales intersecting, at times). You fly down a mostly empty highway, hearing the quick hum of the occasional car headed in the other direction, as your gracious chauffeur shuts off his radio, which is requesting all available units to come back into the city proper, so that he can chat with you.

Soon, cop cars fly opposite you into the city, sirens blaring, lights flashing. At first, it’s just one, and you’re afforded camera movement to see it clash against the stationary landscape and follow it down until it disappears from view. As more black and whites begin tearing down the highway in the other direction at an increasing frequency, the seemingly amiable and innocuous conversation becomes foreboding, as the player has some knowledge of what’s going down while the characters are blissfully unaware of the horrors awaiting them.

As much as Rick Grimes is introduced in the comic as the quintessential good guy — a police officer heroically still rocking uniform, a concerned family man, rugged, (and white, am I right?) — Lee Everett is presented in contrast. He’s on the other side of the law for the (alleged, as far as the player knows!) premeditated murder of a state senator who had been sleeping with his wife. Still, that doesn’t mean Lee is a bad guy, does it? His character is largely shaped by your actions throughout the game. Yes, it’s one of those games with choice, consequences, and semi-divergent gameplay paths. 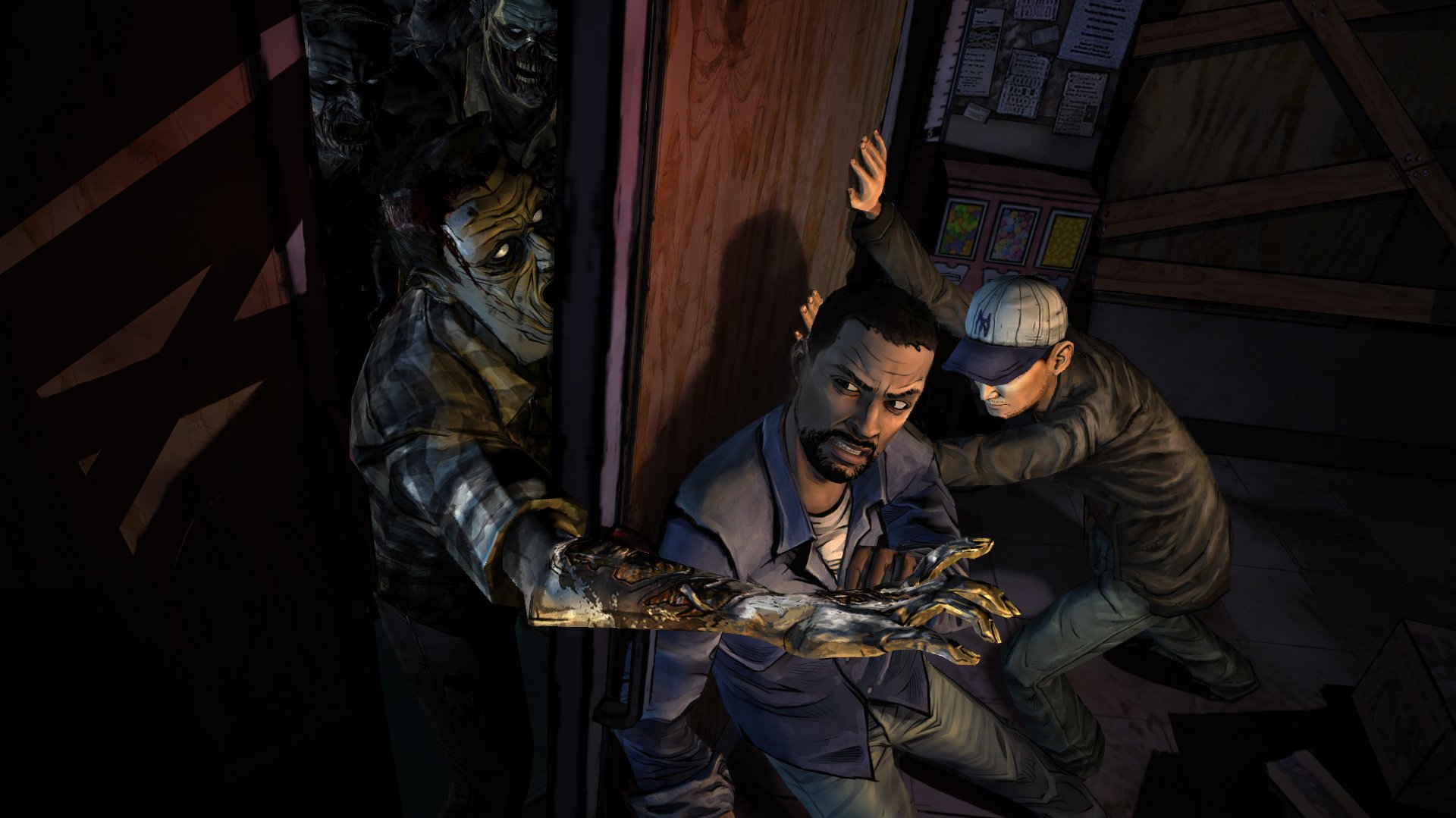 When you begin an episode, you’ll be able to choose between a standard and more minimalist HUD. I played with the standard HUD, which subtly informs you of how the characters you interact with react to your choices; for example, “Character A remembers that you sided with him.” While helpful, I do feel like playing a bit more in the dark is a “better” way to play, though being able to see some of the strings behind the scenes was interesting.

A lot of these seemingly innocuous results of dialog choice affect how the things pan out in the story. So too do more divergent, binary choices of how to proceed, some of which are not timed, and almost made more agonizing for it. How, for instance, do I make the choice between waiting until it gets dark to head out under cover, or looking for help immediately in an unfamiliar area? I agonized over that one for a fair bit, especially as I had just become the surrogate parent to a little girl named Clementine whose parents are probably dead and whose baby sitter I just brutally mashed in the face with a hammer. In many of these choices is the divergence that takes players down different paths toward the same points.

In addition to the dialog heavy gameplay elements, Telltale is addressing criticism over their last game and allowing more free range of movement and exploration in certain areas. It’s not an open-world game by any stretch of the imagination, but these brief bits of wandering about a little more aimlessly were nice, fit thematically, and served to punctuate the other aspects of gameplay well. Additionally, there will be the occasional puzzle to deal with, like offing a gaggle of somewhat un-horded zombies stealthily, and with minimal weaponry. They also eschew infamous “adventure game logic” that would have you smash a red sardine into a keyhole to open a door. Again, these sections help punctuate the gameplay, and felt properly organic in their reasoning (without being too simple). 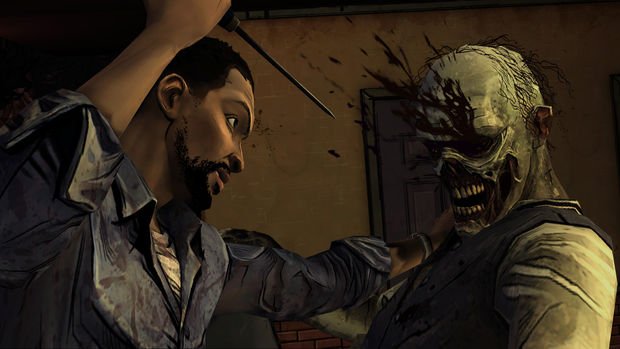 I encountered several rather tough decisions during my time with episode one and perhaps even tougher dialog options as, even early on in the apocalypse the line between friend and foe is blurred and I tried to tenuously keep on good terms with all sides, lest things go south. Of course, in true Walking Dead fashion, they do. A lot. And staying passive or impartial isn’t really allowed by the circumstances at hand.

You’re also forced to face some rather gruesome stuff, like the aforementioned hammer face bashing. I thought it would be over with the first strike, but the button prompt to hit her again remained on screen. A combination of videogame conditioning (push the button!), helplessness, fear, and concern over the life of the little girl made me hit that button again. And again. And again. And again, until the pitiful, labored breathing of the former babysitter lying under me finally ceased. I didn’t want to keep hitting her, but I did; and had to, in a way. The effect was unsettling, and wonderful, in retrospect. I’m promised things only get worse from here (and in fact they did even just in this first episode). Telltale, fully embracing that surprising M rating, isn’t shying away from the gore.

I’m fully on board with Telltale’s Walking Dead series. There wasn’t really anything I saw over the course of the first episode that I didn’t like. The writing is quite good, the voice acting is strong, and I dig the stylish art style. I’m looking forward to probing the turpitude of humanity, with some zombies thrown in for good measure, and seeing just how grotesque things get as each new episode releases.

One final tidbit worth mentioning is that Telltale is running a pre-order promo that could land your likeness in a future episode of the game. The top prize nabs you a role as a human character who dies wonderfully, then returns as a zombie to die wonderfully again, while four runner-ups will appear in the game as zombies. PSN users who purchase a subscription to the series also get a premium XMB theme.