Hot on the heels of Zelda and Mario, the Street Fighter series is celebrating its 25th year of existence. While the series didn’t become relevant until its second iteration, it paved the way for one of gaming’s most competitive genres.

Helping to commemorate this occasion is the release of Capcom’s mash-up of fighting game giants, Street Fighter X Tekken. Two opposing forces of the fighting game world are coming together to celebrate… and pound the tar out of each other. 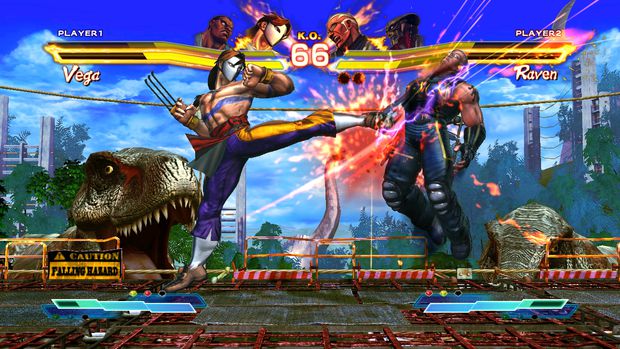 This past week, I got to play the most recent build of Street Fighter X Tekken. The newly announced fighters — Balrog, Vega, and Juri from the Street Fighter universe, as well as Tekken toughies Paul, Law, and Xiaoyu — were all present, but they were far from the focus of Capcom’s latest showing. Instead, legendary Street Fighter producer Yoshinori Ono spent most of his time going over the fundamentals of Street Fighter X Tekken‘s design and the three main philosophies that molded it: casual fun, hardcore depth, and customization.

Street Fighter X Tekken still embodies all the technical prowess that fans have come to expect from the series, but it also looks to invite many more to the party. For starters, the roster is one of the largest to grace a game of this caliber in quite some time. Fans of both Street Fighter and Tekken and, more importantly, those who have perhaps stepped away from either series will find a ton of recognizable faces from their respective histories. 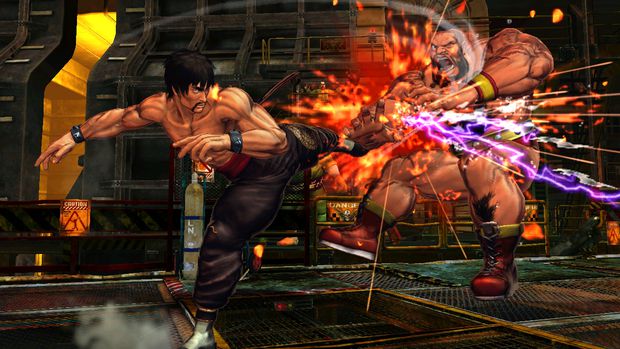 It doesn’t stop here, either. One look at the incredibly colorful graphics evokes an almost childlike sense of awe. Everything seen on the screen is made to be a visual overload. Whether you are in the midst of a heated tag-battle or a spectator on the couch, there is constant stimuli in both the foreground and background to keep you entertained.

Street Fighter X Tekken‘s desire to be just as accessible to the casual fan is best demonstrated by the game’s over-the-top, frantic, four-player scramble battles. It’s a call back to Street Fighter Alpha‘s dramatic battle mode — a mode that let two battle a boss together — but taken to the next level of madness with its no-holds-barred, anything-goes approach. The idea is simple: throw four fighters on the screen at once and let them duke it out in a two-on-two battle to the finish. It’s flashy, hectic, and a testament to just how far technology has come since the series first graced the videogame world. And if a player looks hard enough, they will find a mode that attempts to offer as much strategy as the classic one-on-one brawls, even if it’s built primarily for casual fun. 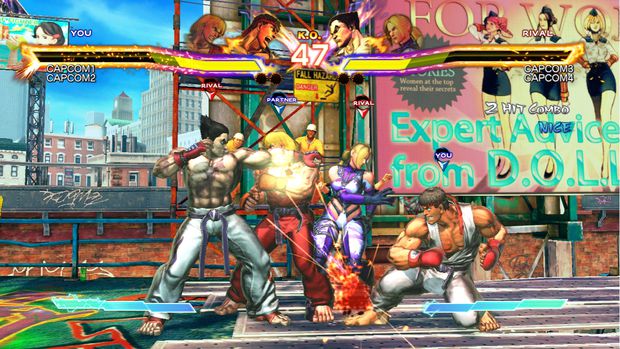 A lot of thought has gone into making Street Fighter X Tekken a game for everyone. Capcom knows that fighting games are often considered “niche” amongst the mainstream, but even as the company builds a fighter to attract everyone, it still has not lost sight of its roots.

Everything players have come to expect from a Street Fighter title is in here — Supers, EX moves, chain combos, and juggles, but they are only the tip of the iceberg when it comes to overall depth. As I mentioned in previous coverage, Street Fighter X Tekken adds some tag Supers such as Cross Art and Cross Assault (which are as punishing as they are visually impressive) as well as some new dynamics within the tag system. While tag-ins are initiated with a press of two buttons, it leaves a player in a vulnerable state. To compensate for this, two additional options for bringing in opponents, Cross Rush and Switch Cancel, have been implemented. 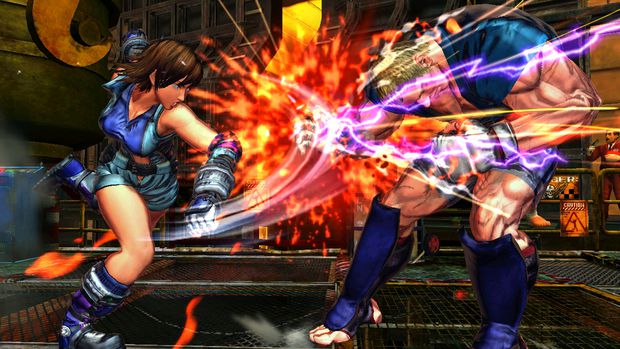 The Cross Rush is a fancy combo that brings your partner in and allows you to continue the combo with them — if you have the skills. Switch Cancel, on the other hand, allows you to switch to your other fighter in the middle of a move at the cost of one level of your super meter. It’s this variety that allows for quite the mix-up and creation of different pressure strings and juggle combos.

Pandora mode might be Street Fighter X Tekken‘s biggest change to the largely unaltered classic formula of the Street Fighter series. You may recall that I had some issues with this desperation maneuver’s balance back in November. Thankfully, it has gone through a major overhaul — players now take damage, which was not the case previously. While still a last resort offensive for most — a player needs to be down to their final quarter of health or less to activate it — once a player comes to understand the strategy found within, there are a lot of possibilities to turn the tide of battle. 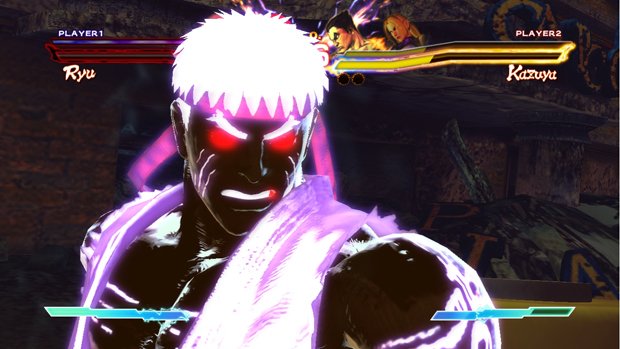 During the demonstration I witnessed, the power of Pandora was unleashed thanks to a nice setup with Ryu. Using his EX wall-bounce kick (from Street Fighter III) and then quickly activating Pandora, Juri (Ryu’s partner) was able to pull off a devastating Super attack that sliced the opponent’s health in half.

The final piece of Capcom’s puzzle, customization, actually finds itself perfectly suited for both the causal and hardcore fan alike. On a basic level, Capcom has included a color edit system that allows the player to give each character a personal touch. Want Ryu to look like an old man with white hair? Hell, why not make Nina completely black. It’s all possible thanks to some quick palette swaps, of which two can be saved per character at a time. Unfortunately, there will only be four colors on the disc, but Capcom has plans to release extra color packs as free DLC at launch. 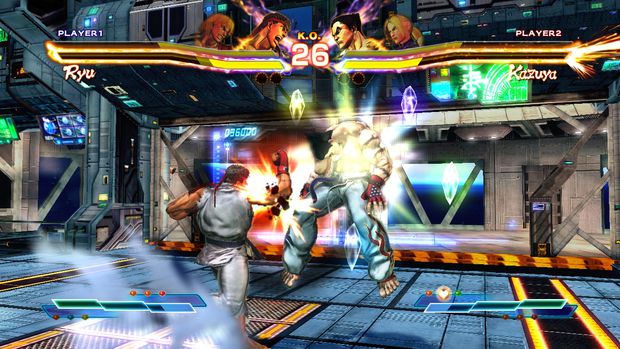 Even though the ability to alter colors might be fairly rudimentary when it comes to fighting games, it pairs nicely with the somewhat controversial gem system that has been added, which is Street Fighter X Tekken‘s way of letting players truly make each fighter their own.

There are 57 gems in total, of which three can be equipped for battle at a time. The gems come in two categories: Boost and Assist. Boost gems increase a player’s parameter (power, defense, and speed), while Assist gems are there for new players or those who have traditionally had trouble performing inputs for the special moves.

The controversy mostly pertains to the potential unbalance these stat-boosting items could bring to the game. From what I’ve seen, both in battle and from their menu breakdowns, this is not the case (though only the test of time will truly tell). To provide said balance, you must reach certain requirements during the fight in order to use gems. The Boost gem Immense Power, for example, is only activated after a player blocks five times or, if a variant of the gem is selected, lands five normal attacks. When the requirement is met, a player gets a 10% power output for 20 seconds before it disappears. Stronger Immense Power gems may provide a better power output but are greatly limited in their duration to offset this. 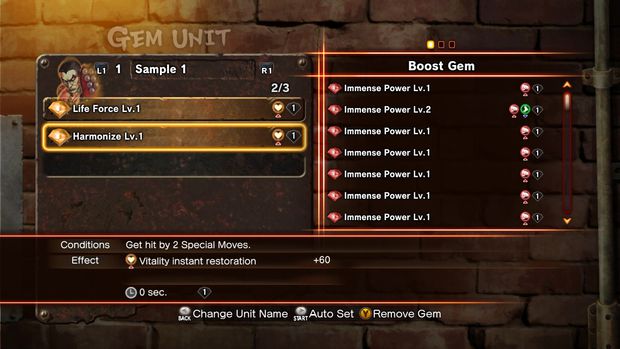 The Assist gems, of which there are only five — Easy Input, Super Easy Input, Cancel Assist, Auto Throw Escape, and Auto Block — offer the biggest tools for newcomers (and really will only appeal to them). At first glance, a player might think it’s an unfair advantage to be able to escape throws with gems, but in the case of the Auto Throw Escape gem, a player must have at least one level of their Super for the gem to activate. Other gems, to balance their use, may come with a decrease in power for their consumption. Overall, I’m pretty excited with this addition. Equipment for fighters, as Capcom put it, looks to offer some much needed freshness to the genre.

There has been a lot of talk about Street Fighter X Tekken since it was first unveiled back at Comic-Con 2010. From the excitement of a dream crossover to the wild speculations of the gem system, Capcom has created something to be enjoyed by more than just the fighting aficionado. The net code has been rebuilt to handle pretty much every aspect of the game (including the training mode) online. It may seem like a little addition, but it’s clear that Capcom wants to make sure everyone is invited to the party when the game launches on March 6.