Oh, the life of the 19th century pioneer. Hunting bison in prairies. Fording a river only to have your oxen die. Dying of dysentery. These memories wouldn’t be so fond if they weren’t attached to the now iconic “edutainment” game The Oregon Trail.

Popularized in the 80s and early 90s, and released across a slew of different platforms, it’s a title that lives near and dear in the hearts of gamers (and non-gamers) everywhere.

Gameloft is set to revitalize the franchise this year with its iPhone/iPod Touch version of The Oregon Trail, hitting the Apple iTunes Store over the next week. I had a chance to visit Gameloft’s Midtown Manhattan offices to check the game out, and no, I didn’t get dysentery. At least not that I know of.

Hit the jump for a full preview.

This isn’t the first version of The Oregon Trail that Gameloft has been responsible for. In 2008, the developer released a version for traditional mobile handsets as well. But it’s important to note that this new version of The Oregon Trail — while it shares many similarities — isn’t the same game at all. In fact, it’s mostly a complete reimagining, a new product developed from the ground up.

Outside of the obvious new touch-screen and accelerometer-based game mechanics, Gameloft was able to tap into a whole new set of resources to bring the trail to life. Starting with the visuals, all of the sprites have been re-drawn, giving it a vibrant, cartoon look inspired by Warner Bros. animation and games like Castle Crashers and Wario Land: Shake It!.

The idea of simply upscaling the mobile version’s artwork was nixed early on in development, and Gameloft got to work on all new, updated sprites and backgrounds. The difference is striking, and the extra resources — a 600-kilobyte maximum program size versus the iPhone applications 100-megabyte cap — certainly account for the difference.

The basic concept of the game remains the same — you’re a pioneer, a wagon-leader guiding your family across the rough and tumble unexplored territory of the Oregon Trail. Starting out, you’ll have some decisions to make, the first of which is the game’s difficulty. 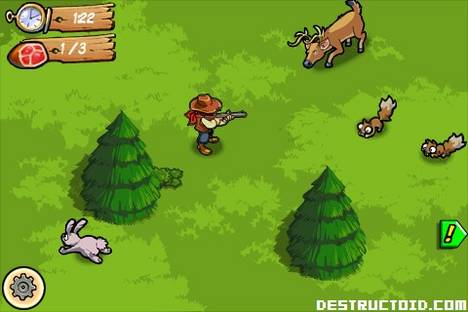 While the hardest difficulty hearkens back to the original game experience (everyone is dead? Game over!), some more casual and mobile-friendly decisions have been made for other levels of play. The normal mode, for instance, will keep chart of your progress and any potential game-ending scenarios will result in a return to your last checkpoint. The easiest mode is similar to this, only you’ll restart with some more resources to help you along; think of it as a gift for those of you who simply couldn’t hack the trail otherwise.

Players will have basic party set-up options to begin, with the ability to change names and gender of some of the family’s children. You’ll also have the option to choose from one of three professions, a choice that will result in different types of passive in-game bonuses.

Choosing to be a carpenter will give you the ability to repair your wagon; the farmer will be more accustomed to eating less food apparently, and will require less sustenance; the banker will simply start with more money. These choices are balanced for different styles of play, and will affect how you’ll have to manage your resources as you play. Those who not fond of hunting for their own food (shooting squirrels makes you sad), may want to choose the farmer, and so forth.

Next, you pick your wagon. Wagon stats are simplified, relying only on “wagon health” and the amount of food that can be held. Choosing the basic wagon is your middle of the road, recommended setup. Choosing the Prairie Scooner is heavy on the food storage; the Conestoga Wagon is heavy on supplies like bullets. Again, like choosing your professional, this is a choice made based on your personal style of play.

Once in the game, you’ll see a few things that are both instantly familiar and new to this version of The Oregon Trail. Speed of your travel, for instance is selected by dragging your finger along the button of the screen, choosing from turtle, human, and hare speeds (from slowest to fastest, respectively). 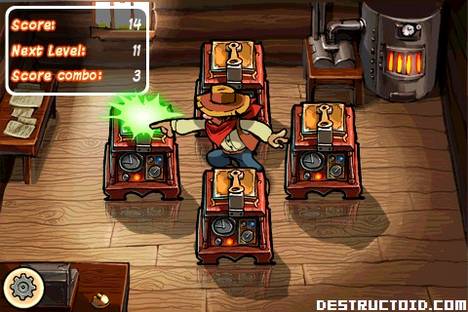 You’ll also have the option to view a map of your progress, which shows off one of the game’s new features, branching paths. For example, you’ll be able to choose whether you want to continue straight or take a north path. The north path has less checkpoints, which may be faster, but also opens you up to more random instances — coming down with a disease, being attacked by bandits, breaking a bone. These random instances are tied to cinematics in the game, like when a bald eagle swoops in from the sky and may take one of your children away.

The Oregon Trail also features a number of mini-games (eight in all) that you’ll encounter along your journey, like the classic “hunting” scenario. You’ll touch the screen to move your character, then touch animals again to fire. While animals start off innocent and small (squirrels), they’ll get larger as you progress (bears), and will even attack a player, causing injury and adding to the difficulty. Once downed, animals drop meat which you’ll then touch to collect.

The fishing game involves tapping a lake to drop a hook, and then tap the character to reel, grabbing fish and bonus boxes while avoiding things like tires which could stun you. The berry picking game is a simple whack-a-mole style affair, with berries coming up in patterns that you’ll quickly tap, attempting to avoid dark, rotten berries.

While most of the games involve touch-based mechanics, Gameloft has explored the iPhone/iPod Touch accelerometer. In a gold panning game, you shake a pan slowly to reveal chunks of treasure, tapping them to add them to your cache. And in one river-crossing mini-game, you’ll have the option to use touch-screen movement or to gently rock the unit side to side, guiding your wagon. 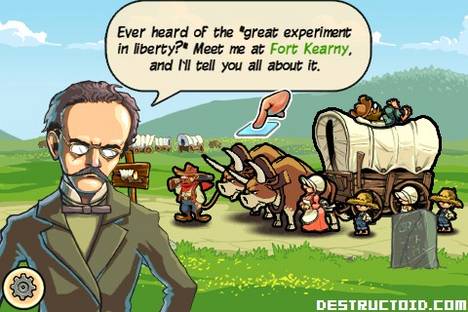 The Oregon Trail also features a large cast of historical figures from the era, including James W. Marshall, Wyatt Earp, Annie Oakley, Samuel F.B. Morse, and more. Each character plays a significant role in the game, giving the player quests and opportunities to earn more supplies and the like. Supplies can also be purchased from stores found at stops across the trail; you can upgrade your oxen, buy food, ammo, and more.

Overall, the game has a more comical feel than the original game you might be familiar with, but still seems to remain true to its roots. Dysentery, broken bones, hunting animals and all.

Regarding concerns of the mini-games getting in the way of the overall experience, it should be noted that there’s no way to turn them off. You can choose to ignore them, but you won’t reap the benefits of progression; by the end of the game, for example, if you’re hungry you may still only be able to hunt squirrels or only pick a few berries. It’s definitely in the player’s benefit to engage in the mini-games, and fortunately they’re not too intrusive, and while simple are fun diversions.

The Oregon Trail is expected to hit iTunes store over the next week or so, and will run you $5.99.