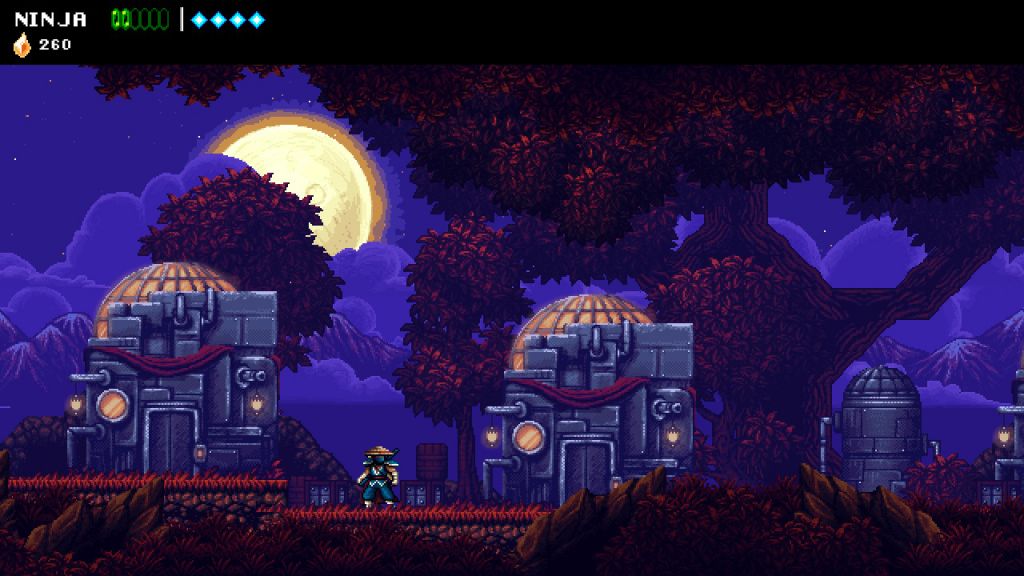 The Messenger is the game I walked away from PAX East this year swooning over. The NES-style platformer takes clear inspiration from Ninja Gaiden. Thierry Boulanger, the lead programmer and designer, has been upfront about that from the start, but The Messenger is a hell of a lot more than a simple tribute to a great NES title.

While our protagonist may have a lot in common visually with Ryu Hayabusa, his adventure is decidedly more complicated, and his skill set far larger. Along with that the fantastic soundtrack and quirky writing do wonders to differentiate The Messenger from its inspiration.

The story hook is straight out of an old NES game. A prophesied demon comes to destroy the world, and our protagonist, a young ninja, is tasked with traveling east and delivering an ancient scroll. You’ll move across a few linear but well-designed levels gathering gadgets like a squirrel suit and rope dart to help you traverse the landscape, but the most exciting thing about The Messenger happens about halfway through.

After a few levels, the story propels our ninja into the future, ditching the 8-bit design for a flashier Super Nintendo-era 16-bit one. Backgrounds become more extravagant, your character model changes, and new 16-bit tracks even drop into the already amazing music.

It isn’t just visuals that change here, either. It’s revealed that our hero had a map this whole time. He never bothered to check it, but in his defense, this is the first it has come up. This quickly opens up into exploring metroidvania-style gameplay. Specific points on the map even allow you to shift between the past and the future to solve puzzles. For example, a tree that’s withered away in the future might have branches strong enough to climb on in the past, or a pile of rubble in the past may have been cleared away in the future.

The Messenger‘s nameless hero controls like a dream. Every jump feels deliberate, and his cloud step ability that allows him to perform an extra jump by striking certain objects with his sword makes moving quickly across these levels feel amazing. Thankfully, this game is a bit more forgiving in certain spots than its NES predecessor. Namely, it gives you a little more breathing room when getting spammed with enemy projectiles to get out of harm’s way and back in the action. I still got my ass handed to me more than a few times during my playthrough, but it was always my own shortcomings.

There’s no life system to speak of. If you eat it, a small demon rescues you and brings you to the last checkpoint. As a tax, he’ll take any currency you pick up for a while, but it’s a small price to pay. The little guy isn’t above making fun of you for dying multiple times at the same spot though.

As you progress, you’ll gather crystals you can spend at the shop to purchase and upgrade abilities. You can get more shuriken to throw or improve the damage of your sword attack. One of the first unlocks I’d recommend investing in lets you perform a cloud step off of enemy projectiles. You’ll also get a few upgrades like the squirrel suit and climbing claws narratively, and new upgrade paths present themselves as you progress in the story.

Speaking of the shop, some of The Messenger‘s best writing comes from the shopkeeper. This game is self-aware in an entertaining way at every turn, but the hooded shopkeeper seems to never run out of things to say. You can sit there probing him for quite a while before you’ll get a repeated line.

I also can’t stress how brilliant this soundtrack is. If you aren’t playing The Messenger with headphones, you’re doing yourself a disservice.

The Messenger remains one of the games I’m most excited about this year even after having played through it on PC. I can’t remember being this excited about an indie platformer since Shovel Knight. I may just have to double dip on that Switch version later this summer.