If it ain’t broke…

Five long years have passed since the original Race Driver: GRID offered racing fans an excellent hybrid racer with edge-of-your seat thrills in a great variety of racing styles. While the DiRT series has branched out a bit in GRID‘s absence, it has never really fulfilled the great scope of the robust experience since its primary focus has always been on rally racing and showy tricks rather than a great variety of races with aggressive A.I. opponents.

GRID 2 is finally on its way. In a hands-on preview of a few races with Codemaster’s Senior Executive Producer Clive Moody, I had a chance to see just what has evolved for the sequel — and what has fallen by the wayside. 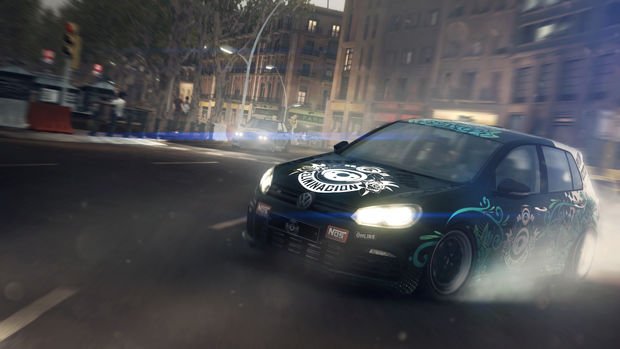 My hands-on preview involved three separate styles of races. These included an elimination-style street race in Barcelona, a BAC Mono car Red Bull Ring track race in Europe, and a checkpoint street race in Chicago. I spent a good deal of time with each race, as I was determined to come in first each time. It took quite a while to get back into the feel of the GRID series with its realistic physics modelling and aggressive A.I. opponents, but once I got back into the swing of things, I felt right at home.

The races felt very familiar to those found in GRID in terms of high-speed tension and careful maneuvering around hairpin turns. In fact, the biggest and most exciting notable difference that I found throughout the races came in the opponents’ artificial intelligence.

If you thought the other drivers were aggressive in the first game, be ready for some very clever moves by other drivers. In both of the street races, I was knocked out a few times by a well-aimed nudge while taking on a turn. You can bet that I used every hairpin to my advantage for this exact same purpose.

Beyond this, much of GRID 2 remains incredibly faithful to its predecessor. However, some important tweaks to the formula have been made, and whether these work for or against the game really may depend on your own preferences. 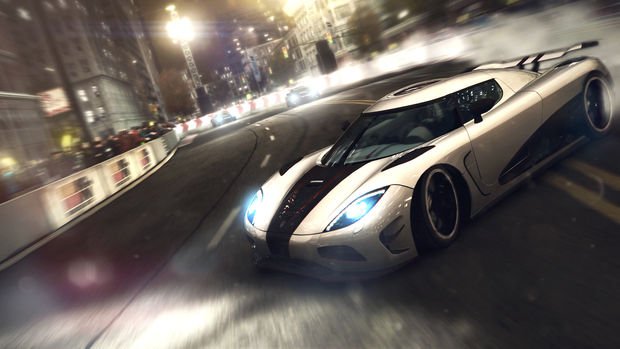 As Clive Moody puts it, “Liveroutes is a mechanism by which we can — in real time — dynamically and seamlessly change the route that you’re driving. The corners change [so] as you’re going around a circuit you come back to what may have been a left turn, now it goes straight on, or now goes right — so you get a real unpredictability with the racing.”

The core principle behind Liveroutes is that it keeps the “unpredictability of open-world races” while still focusing on the close and aggressive nature of the GRID series.

During my playtime, I didn’t notice the Liveroutes system in action though I did notice that there were a lot of points in streetbound races (Chicago and Barcelona) where I could choose between two lanes that broke up the drivers. At the same time, this caused the tension to ramp up even more as the drivers that I faced off against now scraped my bumper into some pretty hairy turns. 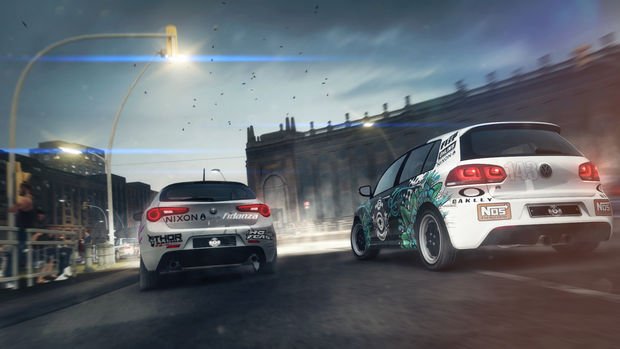 The structure of GRID 2 differs greatly from GRID primarily in its focus on a fictional character known as Patrick Callahan who is a self-made multimillionaire looking to kick off an exciting new Motorsports series. With help from the player and sponsorships, the idea is that you’re the star being promoted by Callahan as you make your way (thanks in part to broadcasting by ESPN) to becoming world famous. Due to this structure, GRID 2 will not have the same focus on teammates. In fact, teammates have been taken out completely, so gaining money through a teammate’s better driving skills is no longer an option.

In my discussion with Moody about how sponsorships work, it became increasingly clear that GRID 2’s structure seems to be aping the structure found in the DiRT series, most notably in DiRT 2 and 3. Much like in that franchise, as you gain prestige, you also gain access to better sponsors with higher payouts and better liveries to flaunt on your chosen vehicle. 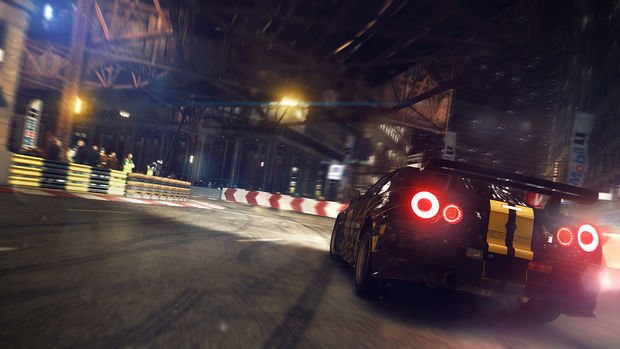 Personally, I don’t mind this structural change too much. While I did enjoy the process of hiring and firing teammates based on their skills and how much money they made me when I failed to do well in a particular race, I trust in Codemasters to still retain a similar sponsorship model that doesn’t focus primarily on winning. As Moody reassured me later, sponsorship challenges focus once again on a variety of goals, from taking no damage to overtaking a specific opponent within the race regardless of final standings.

I also asked about whether 24 Hour Le Mans would be making an appearance, and Moody told me that it was something the team was still tossing around, dependent on fan reaction. Personally, I wouldn’t miss its absence. As much as endurance races are great for hardcore racing fans, GRID is the most enjoyable when taking on different styles of racing with tough opponents. 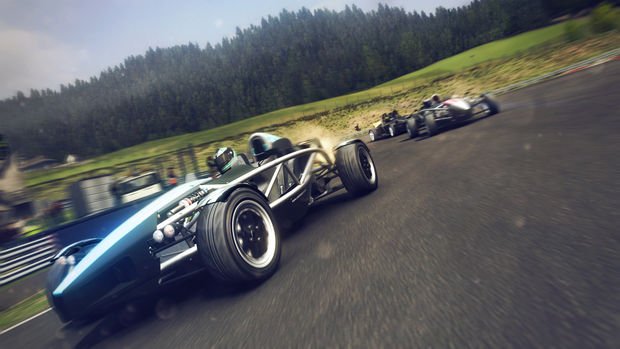 In a European Red Bull Ring race that featured small, lightweight, and barely street-legal vehicles known as BAC Mono cars (think Formula 1 meets go-kart), I took a few misjudged turns and really smashed up my vehicle. Moody took the opportunity to demonstrate how the damage modelling system in GRID 2 has really advanced since the first game.

In the first GRID, a lot of emphasis in damage modeling was focused on body deformation. However, the developers came to the realization that not all vehicles are made of the same material and therefore they won’t fall apart in the same way.

In the carbon-fiber vehicle I was racing in, I witnessed large chunks and smaller pieces of the vehicle simply break away and fly off. I asked Moody if the damage modeling would be only cosmetic or if it would be internal as well, and he explained that unlike the first game, GRID 2’s internal damaging would be entirely optional, though he suggested the best experience involved putting full damage modeling on. 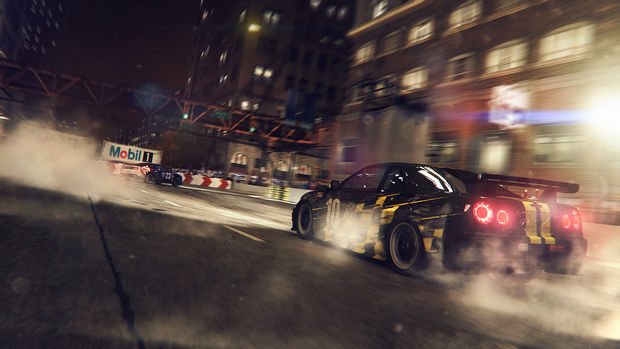 One of the biggest draws of the first GRID that really appealed to hardcore racing fans was the excellent cockpit/driver’s seat view that allowed you to see from directly behind the driver’s eyes, rather than out on the hood of the car or as some floating viewpoint in front of the car. Though this view had been implemented in racing games before, GRID really brought it home with the way the driver reacted and certain camera tricks to make you really feel the impact of collision or an awkward turn.

Sadly, GRID 2 is lacking this feature and it is certainly no accident. As Moody told me, “We knew we’d get fan backlash …they need to just get their hands on the game and play it…the core principles of GRID 2 are still there, and we’re sticking by it.” 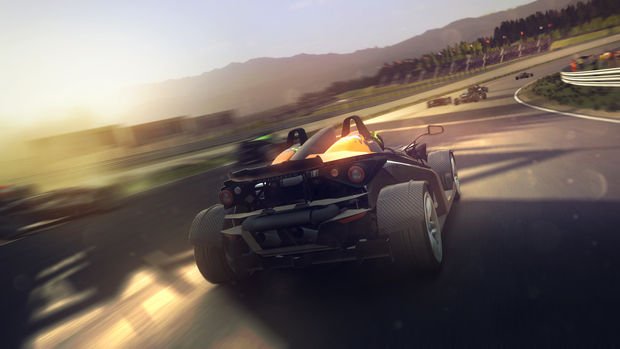 In the preview of the three different race types (road, street, track) I was able to check out, I couldn’t argue this fact. The racing is still aggressive with improved A.I. and the game still straddles that perfect line between all-out arcade racer and pinpoint precise simulation. I spent a good 20 minutes just racing before I even realized that I hadn’t switched between views to get an idea of what was there.

I have to admit that I will miss having that amazing driver’s seat view and I find its absence a little curious. I just hope that the developers really have focused great effort into the thrill of the races themselves in lieu of designing a cockpit view for each and every car, and that this isn’t just an excuse for focusing efforts on more onerous ideas, such as a future deluge of DLC that would’ve already been on the disc in GRID.

From an overall impression, I’m optimistic about GRID 2 and can’t wait to get back into some thrilling races all over the country, including my own favorite place to drive: the California coastline. The first GRID provided a racing dream for me, as I absolutely loved a game where being an aggressive driver is not just encouraged but essential as the A.I. reacts realistically and will take you out on a hairpin turn. From what I previewed in GRID 2, this same core element remains perfectly intact, with even smarter A.I. opponents.