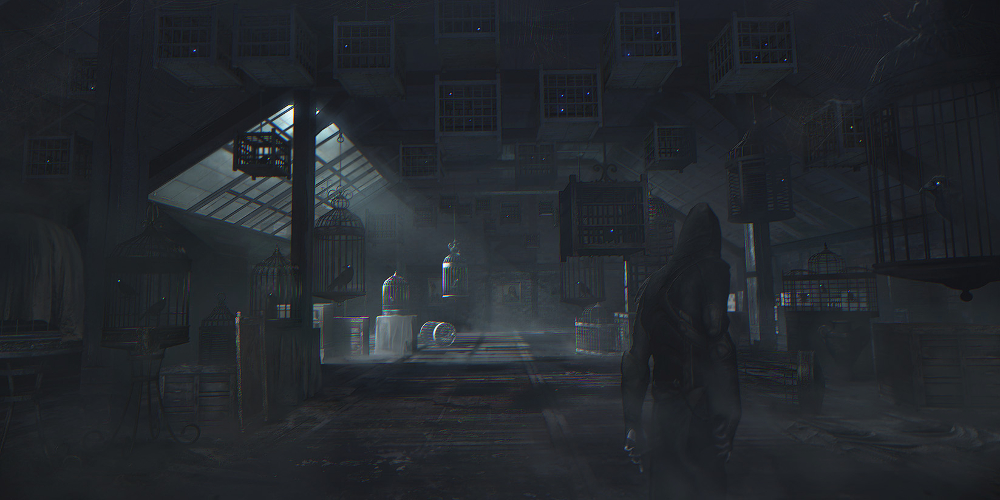 Back in October, I got the chance to sit down to chat with members of Eidos Montreal after a lengthy session with the new entry in the Thief series. Since the reveal in 2009, the game has gone through many different iterations and changes. From an obnoxiously named THI4F and a proposed and tested third-person action game; this new take on the series has been through the ringer. As such, fans have been skeptical of whether a new entry can work.

The Thief series is known for being one of the pioneers of the stealth genre on the PC, and fans of the series have been looking forward to seeing its return. As somewhat of a soft-reboot for the series, Eidos Montreal and Square Enix are in an interesting position to re-introduce fans to Garrett, the Master Thief — along with new players looking for a new game with a different approach to stealth gameplay.

Well, after spending about 4 hours playing this new take on the series at a media press event; I can safely say that I came away quite impressed with what Eidos Montreal have in store. The scope and adaptive take on stealth is dense and complex, and even may impress those who wrote off this new take on a classic series.

After a long absence from a job gone wrong with a reckless protege, Garrett returns to The City looking for answers about what happened. Finding the metropolis in a state of decay from a mysterious plague, Garrett must re-establish himself and discover the mysteries of the sickness along with its possible supernatural origins. Along the way, he’ll pillage and loot the wicked and wealthy of the city while restoring his reputation as a master thief.

Ever since their showing at last year’s E3, the developers at Eidos Montreal have been mindful of fan reactions towards the game, and they’ve since made a number of changes to the game’s design and structure. One feature that received backlash from fans and critics alike was the experience points and leveling system. This element came off as jarring and broke the immersion of a stealth action game, as Garrett would receive headshot bonuses as if he were a soldier in a Call of Duty game.

As of last year, this facet of character growth has been entirely reworked and designed around a more grounded system, and of course by how much coin you’ve got on hand. Many of the items and gadgets that Garrett could level up and acquire before have been made available to various black marketeers and item shops, creating an in-game economy based on player needs. In addition to this, new items known as trinkets will decorate Garrett with accessories that give subtle increases to his abilities and skills while in the field.

Right from the opening menus in the title screen, Thief allows players to tailor their experience however they see fit. In the options screen, you can customize the HUD and gameplay by removing indicators and clues from the game world, and even turn off gameplay features such the Focus mode, which augments Garrett’s sight and skills for duration of the focus meter.

To take the customization even further, you can even fine tune the difficulty and style of game to your liking. Along with the standard easy, medium, and hard (called Master Thief), there’s an option available for Custom difficulty. When the custom mode is selected, you can set it to any of the previous difficulty modes in addition to a number of tweaks and changes to the style of game you’re looking for.

Want to play on Master Thief difficulty with instant game over upon harming and/or alerting enemies? You can do that. Want to increase the challenge by raising the prices of black market items across the board and make a no-damage run through the game? Sure, absolutely you can. Want to do all the scenarios I’ve just listed and more in a single run? Go right ahead. The designers were clear to let players know that they can play the game in any way they want, and Thief will accommodate and provide the challenge.

During the opening hour of the game, players much venture through the streets of The City as martial law has been put in place. Garrett observes dialog from the guards and citizens learning what happened while getting back into the swing of things. Although this may sound restricted and guided, and it was — because it was still the tutorial sequences — there were plenty of moments to take your time and explore the space.

While entering a jewelry store, you can choose to loot the whole place, even though you only needed one item. Learn to use the shadows and Garrett’s agility to move in and out of cover, and you’ll have the guards none the wiser of your presence. The controls are fluid and swift, and players can move in and around the environment with ease. The light gem makes a return, which helps players see if they’re visible or not.

A new skill known as the ‘swoop’ allows Garrett to make swift dashes in any direction during stealth and combat to evade attacks or the eyes of people on watch. Keeping on the move and at the ready is a key part of the stealth gameplay. While there is a focus on contextual situations for certain actions, such as jumping, I didn’t find myself missing the option to jump manually. I found moving around with the sprint, maintaining momentum, and vaulting over objects with the contextual actions to feel pretty smooth. It’s certainly different, but I honestly didn’t feel too restricted by this approach, as much of the depth and level design was still dense with options.

It’s clear that a lot of thought has went into the design of the stealth system for Thief, as each situation and setting features a variety of options for the player to engage in. While there’s plenty of stealth options on the streets, vertically also plays into it and you can observe situations and avoid enemies from the rooftops and rafters of buildings. Playing for skill is a big focus of the stealth gameplay, and after each central mission in Thief, players are graded and scored on their performance.

Moreover, stealth gameplay is judged between three styles of play. Ghost style focuses on not engaging enemies and staying unnoticed; predator style takes the aggressive approach rewarding players for stealth takedowns and combat; and opportunist is a mix of the two previous styles. How you play is up to you, and Thief‘s gameplay system will judge you accordingly. If you have any desire to repeat main missions, you can do so immediately after completion or in the main menu.

Upon arriving at the The City’s clock tower, which also serves as Garrett’s base of operations, the game opens up considerably, as the markets and streets of the city are densely packed with content. These streets serve as the HUB area of the game, where players can venture out and move towards new areas. Eventually, players will take Garrett to abandoned mansions used for nefarious purposes, and a brightly-lit brothel doubling as an opium den. Many of these players are a refreshing change of pace from the dark and dank streets of The City, and allow for players to adapt to new enemies and settings.

While there is a clear objective and destination, you can venture out of your clock tower and discover hidden treasure spots and optional quests to uncover in the nearby areas. It felt very open, somewhat like a sandbox. Some homes can even be entered and looted for valuable collectables. Deciding to take time away from your current objective can reward players with new side-quests and other missions.

Another new feature to spring out of the game’s removal of the experience system are Focus Points. Throughout Garrett’s quest around The City, he can meet certain characters that will reward him after quests with FP that can upgrade his core abilities. These points can go towards upgrading Garrett’s skills in marksmanship, stealth, intuition, dexterity, speed, combat, sense, and his overall efficiency in completing jobs. Though keep in mind that FP are somewhat rare, and they’ll have to be spent wisely.

How you manage resources is one of the most important skills players have to pick up. Thief takes a more classic approach to health and resource management, where health and focus meters need items to restore to full strength. Items such as arrows or potions are a risk, as being out in the field during main missions will leave you no access to vendors.

Visually, the game looks stunning. As I was playing this on PS4, I took advantage of a number of features using the touchpad. When you place your finger on the touchpad, a mini inventory grid pops up in real-time and sliding your finger across the pad can select items. It was a pretty neat feature and a cool way to use the touch capabilities, but I still found the traditional inventory screen (which can be switched to in the options menu) to be more my thing.

The stealth gameplay is very sharp and requires a lot of careful planning as there are a number of obstacles that can trip up Garrett. Some guards and houses in The City keep bird cages nearby, and any frantic action will cause the birds to panic and alert anyone nearby. Even during lockpicking, players must endure the risk of being spotted or altering guards — messing up during opening safes will make noise and catch the attention of nearby guards.

Though if worse comes to worse, players can utilize Garrett’s skills and gadgets to subdue foes. The thief’s trusty blackjack and bow (with multiple arrow types) allows for both melee and ranged options. Moreover, focus mode during combat allows for Garrett to target specific enemies for an instant takedown.

To be totally honest, I found very little to enjoy about actual combat. I can understand Garrett’s reluctance to engage in actual fights — he’s just not good at it. Fights feel clunky and cumbersome, attacks lack any sense of feedback, parrying with your blackjack comes off as awkward and futile when facing multiple foes, and the dodge feature can leave you in a sketchy spot while evading the enemy attack can cause you to lose track of where they are. I found myself avoiding fights and sticking with stealth takedowns, just so I wouldn’t have to endure the fights.

Despite this, I still found much to like about my time with Thief after about four hours of play. During this period, I examined how I tend to play stealth games, and how this one manages to nudge me out of my comfort zone in places. Sometimes it pays off to be aggressive and forceful, but other times it’s best to let things pass and be passive. It’s rare when a game makes you analyze how you play, and Thief tasks players with making unique choices.

It’s very clear that the developers at Eidos Montreal spent the last year looking at their game and fine tuning it with fan feedback and criticisms in mind. Even after his long absence, Garrett still has got some neat tricks up his sleeve. If you’re of an open mind and willing to try out this new take on a classic series, you may find more to like about it than you think.