The dog days of summer have arrived, which means that the September 9th release of The Beatles: Rock Band draws ever closer. Information about the game has been coming from a variety of sources; two days ago, we found out that Rubber Soul and Sgt. Pepper’s Lonely Hearts Club Band will join Abbey Road as the first full albums to be released as downloadable content for the game.

But aside from 25 of the 45 on-disc songs, along with details on the Vocal Trainer, we don’t know much about what the game will contain. Harmonix has hinted that the career mode will be special, though, and they weren’t kidding. I saw the first two chapters of the game’s story mode last month, as well as its expanded training options for drummers.

I’ve had to keep quiet about that until now, and I hope you’re as excited to hear about it as I am to spill my guts. Hit the jump to find out what’s so emotional about the story mode in The Beatles: Rock Band. 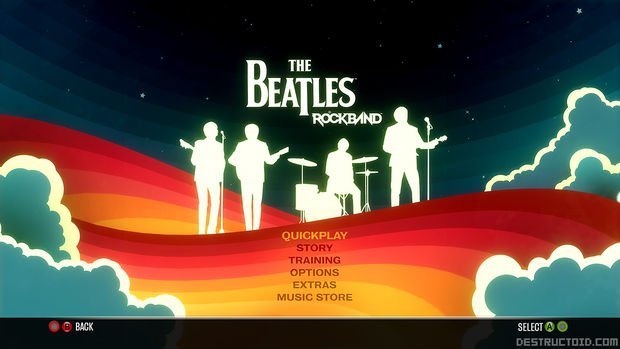 Harmonix knows that The Beatles are a band whose audience transcends generational boundaries, so they’ve designed The Beatles: Rock Band with accessibility in mind. MTV is marketing the game through avenues that are unconventional for videogames to reach Beatles fans — specifically, adults — who may not necessarily be gamers, and thus, might not have ordinarily been aware of this product.

So what does that mean for the game? Well, all 45 songs are available from the start in Quickplay. Instead of progressing through the Story Mode to unlock new tracks, you play to unlock rare — and, in some cases, never-before-seen — media. This comprises photos, audio, and video spanning the entirety of the band’s life. The Story Mode’s main screen lists the game’s songs; they’re organized in chapters based on periods of the Beatles’ career. You start out with their first gig at the Cavern Club, and you make your way through a chronological setup including other famous concerts and albums, all the way through to the rooftop performance on January 30, 1969. 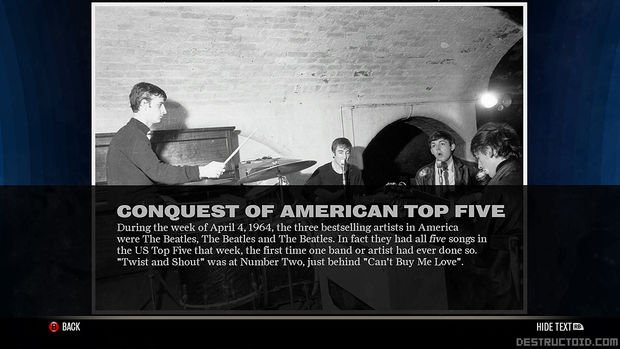 Each song shows your star rating (one to five) and two camera icons signifying unlockable photos. To unlock the first photo, you merely have to complete the song with three stars. But in order to see the second photo, you’ll have to finish it with a five-star rating. Harmonix publicist John Drake explained that it was set up this way so that everyone — even people playing on Easy difficulty, which has “no fail” turned on by default — can see at least one photo. But this still offers a challenge for the more skilled, veteran Rock Band contingent, especially the ones attempting to five-star songs like “Birthday” on vocals.

The photos themselves are overlaid with a Beatles fact that provides context; there are over 90 photos in the game, and Paul McCartney personally verified every single fact that accompanies them. I saw a shot of John sitting in a studio with headphones on and a guitar in his hands — it’s a behind-the-scenes image that was taken during the recording of Please Please Me, the band’s very first album. Many of the photos are candid shots, while others are promotional material. There’s a great image of the Cavern Club concert, showing a small room packed to the walls with maybe a hundred people; Drake noted that it looks “like a … fan photo.” But this is just the start of the Beatles-related content in the game.

Stars on a song unlock photos, and photos unlock “prizes,” which are non-photographic media that can be viewed in the game’s Theatre. This is the really good stuff — audio and video, including performance footage, that’s “either never-before-seen or very, very rare.” Drake was gracious enough to play one of the prizes for us. The Beatles Christmas Record was the first of seven annual holiday gifts to the band’s UK fan club, which, in 1963, boasted 25,000 members. I mentioned to Drake how amazing I found it that this content is being released in, of all places, a videogame; he agreed, saying, “This provides the depth that people don’t think is coming to the game.” 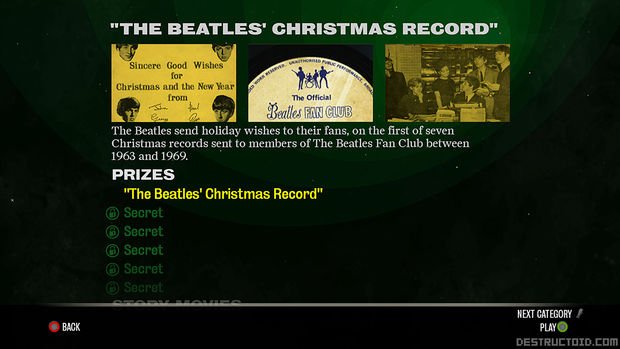 Another feature designed to make life easy for newcomers is the game’s drum teaching. Harmonix added to the drum trainer that came with Rock Band 2; this time, it’s called Drum Lessons. It’s more of a “rudiments trainer” than the beat/fill practice in that game, a result of Harmonix’s “presumption that people coming into this game are probably even less good at drums than people who’ve played Rock Band 1 and 2 — like, they’re probably even more entry-level.” So it begins with the basics — eighth notes first, followed by one hand and the kick pedal. The third test has you drumming with both hands, and the fourth lesson puts it all together. As Drake put it, “That’s your first week of drum lessons if you’re nine years old.”

There are 45 drum lessons covering a drummer’s full toolkit (by the end, you’ll come upon some pretty gnarly-looking beats, like a paradiddle that Drake was able to complete flawlessly at 140 beats per minute). Once you’re confident in your drumming techniques, you can move on to Beatle Beats. These are drum patterns and fills taken from Beatles songs; they’re not named, since some beats can be found in a number of songs. Drake began playing one and sang a bar of “With A Little Help From My Friends” over it, and then kept drumming but switched to “Maxwell’s Silver Hammer.”

A neat touch is that the drum trainer provides definitions of music terms. So if you’ve ever wondered what exactly “syncopation” is, the game will tell you! The game includes 86 Beatle Beats, so by the time you’ve made your way through all of them, you might think you’ll be able to play many songs without looking at the note highway. But Drake mentioned Ringo’s drumming tendencies, which will likely throw you off: “Ringo is a really solid drummer, who settles into a really good feel for a song, but he’s really innovative in that he never plays the same thing twice.” Keep your eyes peeled, folks! 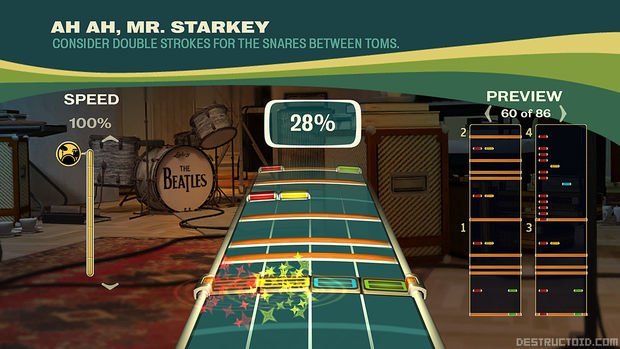 Everything I’ve seen so far of The Beatles: Rock Band indicates that Harmonix has done their very best to ensure that nothing about the game even hints that it’s a mere cash-in, or that it’s “milking” the Rock Band franchise. The unprecedented access that the developer had to the surviving Beatles and their family is being conveyed to gamers. After hearing The Beatles Christmas Record, I remarked, “This [game] is going to make people cry.” And it very well might.