My dear Tales of Monkey Island,

Telltale has treated you so good, turning you into a successful episodic franchise. Many would say you do the original justice, which is a wonderful thing to see. Oh, and Telltale has decided to release your original episode for free this weekend? How charming! I suppose I should pick that one up.

You see, new Monkey Island, when I met up with the Telltale team this week to take a look at your third episode, Lair of the Leviathan, well it was like being a virgin. There’s all of these in-jokes and standards of the franchise that I just didn’t understand. But I had a job to do, and I wanted to get to know you well.

Sadly, it’s like coming into the middle of a film when dealing with you. I’d love to talk to you proper, but for any nosy people out there, I suppose I’m going to be giving away a bit of your plot. We should be careful, and tell them to follow the jump if they are willing to take the risk.

Now Tales of Monkey Island: Lair of the Leviathan, you have two whole episodes preceding you. Apparently, Guybrush Threepwood (I know at least that much!) has transformed Le Chuck him into a nice guy, turned all the other pirates into douchebags, and has released a Pox of Le Chuck upon himself, his lover Elaine, and others. He’s lost a hand, and is acting more and more Le Chuck-like everyday.

The only cure, according to Voodoo Lady, is a giant sponge, La Esponja Grande, which brings us here. I’m not really a fan of using sponges*wink*wink*, but it’s your call, honey, not mine. Anyway, the first part of Episode 3 takes place inside a giant manatee. Normally cute and cuddly, this manatee swallowed Guybrush and a crew of pirates. Certainly not the nicest people, this first portion of the episode centers around wandering the insides of the sea cow and gaining support. Like in other Monkey Islands, Guybrush must do pirate battles, and this time it’s just as odd and surreal as an insult fight. While blood isn’t drawn, other body parts. Fans should have fun with this. 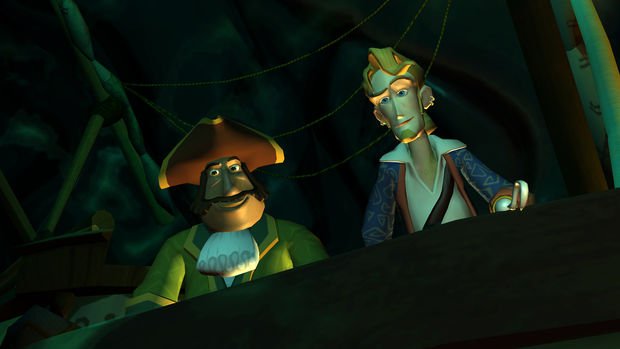 Controlwise, the new standard for the series has carried over, which I know about because editors have reviewed you in the past. I certainly do not want to be redundant when starting this new relationship, now do I?

While I’m not your biggest fanboy, Monkey Island, I am at least aware of something. Your Telltale guys seemed really keen to show off a fan-favorite, Murray. A disembodied skeleton head, he’s a jerk and so desperately pathetic, Guybrush can’t help but be there for him. Expect to see Murray a lot in Lair of the Leviathan.

Finally, Monkey Island, you’ve won me over with two incredibly charming jokes. One involves a great series of puzzles involving the manatee’s personal life, and another is something so specifically Californian, I cannot help but mention it. Late on in this episode, you showed me a sign telling me that I’m exactly where I need to be, and this sign looks exactly like a California State park sign. Sure, you would have to have driven through Tahoe or Joshua Tree National Park to get it, but this just serves as a reminder that you know the truth: the West Coast is the best coast.

So what is my ultimate impression of you, Monkey Island: Lair of the Leviathan? Well, I found you funny and charming. I don’t know if I could just saunter in and start you up from the get go. You episodic ladies need some time to warm-up, and I need to know what I’m getting into. Certainly, gamers who have experienced you in the past will want to pick you up on September 29, with your WiiWare cousin debuting not long after. Newbies like me, well, we’re going to have to start something fresh before moving onto you.