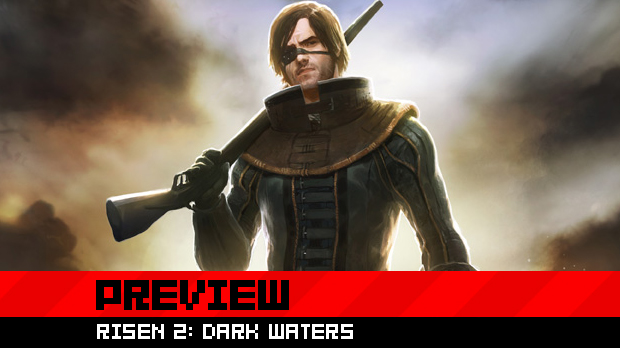 Pirates — the swashbuckling sort — are pretty great. Videogames are pretty great too; the good ones, anyway. For some unfathomable reason, these two things don’t come together as frequently as I would like. Fortunately, Piranha Bytes, creator of the Gothic franchise, is aiming to rectify this oversight.

Risen 2: Dark Waters maintains the team’s lineage of traditional, PC RPGs, but eschews the traditional fantasy fare in favor of something far more piratical, and, perhaps, a bit more accessible, without sacrificing the depth and skill trees associated with the genre. 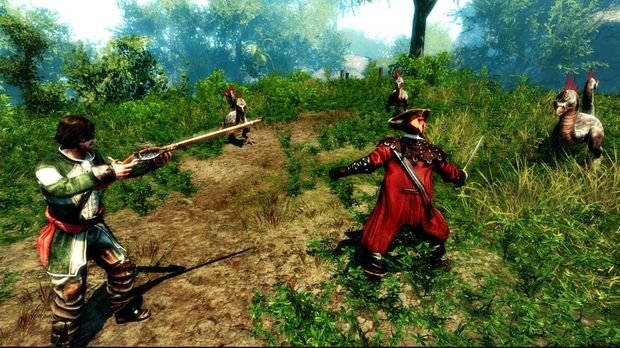 Risen 2 begins with its nameless hero washed up on an island and needing to prove himself as a pirate in order to captain a ship. In this way, it opens up more linearly than its predecessor, allowing the player to get their bearings and organically figure out the mechanics, as opposed to being dumped in a wide open world without any direction. Once the nameless hero acquires a ship, the game opens up entirely, with six different islands to explore at the player’s leisure. They’re not one and done affairs, either, as quests will bring you to different bits of the island or new abilities will allow access to previously blocked off sections.

The ship serves as a hub, much like the Normandy of the Mass Effect series; there is no actual sailing in the game. The crew rest aboard the ship as well, with one mate ready to tag along whenever the captain wishes. The crew mates are specialized, thus making particular members useful for certain segments of the game. Additionally, members can be used to cover any deficiency in the way you build the hero.

Sticking true to its western RPG philosophy, there are a lot of different ways to customize your character. Superficially, you can dress him up in a variety of clothing or fanciful hats. More importantly, however, he can be built to accommodate a variety of play styles, from the swashbuckling swordsman to the ranged gunman to the subversive voodoo practitioner. Within these groups of abilities there is more divergence. For example, choosing whether to focus on slashing or piercing swords, or choosing to augment the main character with an adeptness in alchemy, which would allow you to gather herbs and the like to distill your own rum.

Oh, yes, rum. This is a pirate game after all. Rum is the game’s healing item, and equally useful in greasing up a drunkard for information or help. The first thing I did during my hands-on with Risen 2 was talk with a tippler about getting fresh water loaded to my ship so I could shove off. A bit of rum made this charming, already intoxicated drudge quite chummy, and he informs me that his boss, Butch, is keeping them from loading water, in accordance with some embargo — though he couldn’t quite pronounce embargo in his drunker slurs.

Conversations are fully voiced and rife with crude piratical jargon, delightful accents, and loads of swear words, all of which is rather charming. It’s also important to listen to the dialogue, as there are things you might be told that are important, but the game won’t explicitly highlight them for you. From the drunkard’s dialogue, for example, I learned there was a desolate, near off cave I could trick Butch into going to with me. Mentioning the cave and insinuating that it might be treasure-filled was one of a bunch of dialogue options, but the only among that group that yielded the desired result, which was a mano a mano sword fight with Butch — and I didn’t even have to kill him before he gave up! 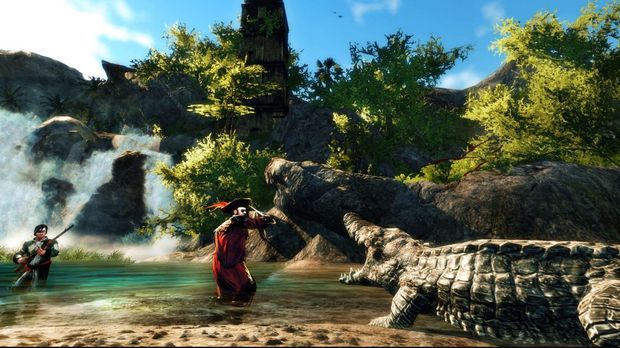 Reloading the save and talking to the drunkard further also opened up the idea of using voodoo to get my way, an option available because the nameless hero had sided with the natives prior to my hands-on. I went to talk to Butch, distracted him, and pilfered a strand of bead hair. With it and a few other items, I made a voodoo doll, which I then used to assume direct control of Butch and bark orders at the filthy layabouts to load water onto my ship.

With the rest of my time with Risen 2, I mostly wandered about the island, exploring and fighting all manner of nasty little creatures. Thankfully, the game’s inventory does away with encumbrance and let me scavenge to my heart’s content. I don’t know why I got so much joy out of seeing a coconut on the floor and picking it up, but I did.

The combat felt somewhat stilted, as one might expect from an RPG. Playing with the cutlass-clad swashbuckler, I was mostly locking onto enemies and hacking away at them, as well as using the kick command to deliver a nice boot to the face. Also at your disposal is the aptly named “Dirty Trick.” Limited by a recharge time, these can give you an edge in battle. While the one that involved pulling out a pistol and shooting your adversary between sword swipes was deviously fun, my favorite has to be the parrot, which you can send out to temporarily disorient and annoy enemies. This can either render one threat in a group helpless, evening the numbers, or it can be used to distract an enemy while you flee. 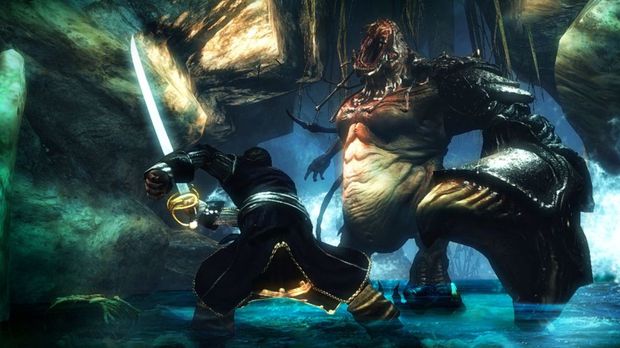 While the pirate world in and of itself has me excited, the little hints of personality and charm in the game have me the most excited. At one point, I pulled out my handy voodoo stick and made two gorillas fight each other, allowing me to slip by unnoticed. At another, I found myself being chased down river by a voracious, snapping crocodile. There’s even an adorable pocket monkey, which you assume direct control over and can use to scout an area, get into tight spaces, or steal things.

Risen 2 has a lot of traditional PC RPG aspects, yet its abandonment of the medieval setting that has become so ubiquitous makes it feel surprisingly fresh. The lush, tropical environments are pleasingly vibrant, made more dynamic by some nice mood lighting and the day and night cycle. The characters are crass, affable, and oftentimes humorous — it’s a nice break from stuffy fantasy dialogue. Everything about Risen 2: Dark Waters just feels so adventurous. I really hope my positive experience with the game is indicative of the final product, because I could really use a new, good pirate game.