You know what I like about Super Robot Taisen OG Saga: Endless Frontier? I like that it makes no apologies at all about what it is or what it does. None at all.

Hell, look at the title. Could it be shorter? Sure. But it’s not going to change for you. The game itself, despite being on the DS, does nothing with the touchscreen or any other features except the good ol’ buttons. And 3D visuals? Nope. Why be bothered with that when 2D is easier and has worked forever. Even the in-game characters are crass and nonsensical, and they don’t care what you think.

See? No apologies. But we like it anyway. Read on to see what we dig about Super Robot Taisen OG Saga: Endless Frontier in our preview.

If there was ever a game that you could charge with sexual harassment, it would be this title. You might expect that from Japan, but maybe not in a DS sci-fi fantasy RPG. But it’s in there. The game starts off by following a futuristic, perverted cowboy named Haken Browning and his well-endowed robo-babe Aschen Brodel. I think it takes about one minute before the first breast joke breaks the ice. Hell, Aschen’s power potential isn’t even fully unlocked until the top half of her chest is fully exposed. Tasteless? Maybe. Hilarious? Absolutely.

It doesn’t stop there. This RPG has as many innuendos as your typical RPG does low-level slimes. And the perverted talk comes easy to Haken as just about everyone he meets has ridiculous boobs. There’s more busty party members to come as well as busty enemies, busty bosses…hell, even busty shopkeepers. Of course, Haken does not hesitate to try to put the moves on each and every one of the members of the female cast in between decisive battles and travel destinations. I can only image that the localization team at Atlus had a field day with this one. A tip of the cowboy hat to the team there.

Let’s just say this: I’m only about 5 hours in this game, but as a red-blooded male gamer in his prime, I’ve laughed my ass off dozens of times already. But, as Haken says in the game, it’s “not all fun and dames.” 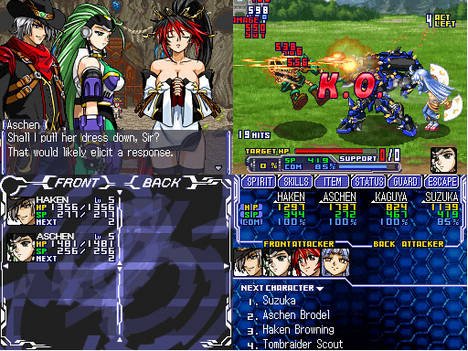 I’ll be honest: after seeing the flat 2D map screens in the beginning, I wasn’t expecting much innovation from this role-playing game. I was already thinking that funny dialogue wasn’t going to carry this game. I quickly learned that this isn’t just some mindless turn-based affair, though. The battles are insane. And so much fun.

The goal here is to juggle your enemies, just like you would in a fighting game. Each character has a COM meter. With this meter at 100%, you can pull off all the “skills” you’ve dropped into a preset list by pressing the A button. Mash it five times and you’ll execute the five skills placed on your list. Press it twice and you’ll do two. You unlock more skills as the game progresses, and you’re free to use any of them at any time.

The real fun comes in how these moves are executed. Once the button is pressed, your enemy is launched into the air and hit repeatedly. Should you hit the A button again with the exact required timing, the first skill is “cancelled out” and a second one is started, chaining the attacks together. You can actually go through all of your skills, and then send another party member in to continue the chain. The goal here is to chain as many hits as possible (and take off as much damage as possible) with good button press timings. Right now I have four characters in my party, and I’ve chained all of them in a row successfully for 127 consecutive hits and 33,940 points of damage. And I laughed maniacally through the whole chain execution.

On top of all of this battle insanity is a super meter that fills up as you land hits and keep your opponents juggled. Once full, you can trigger an over-the-top super move for each character that is so crazy that you’ll just have to laugh at it. What’s great is that it can be thrown into the above mentioned chains, letting you inflict serious damage. The charm of these attack lies in the fantastic presentation. You’ll get full-blown animated sequences playing over the damage that is going on in the background. There’s close-ups of boobs bouncing, thousands of bullets flying, and beams of anime light shining everywhere. Serious gaming sensory overload here. 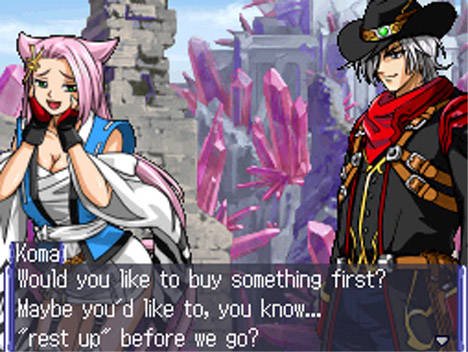 Aside from juggies and juggles, is the rest of the game good? I think so. So far the game seems pretty linear, though there’s a cool sci-fi twist to it all. And I think I saw some Gnosis from the Xenosaga series as enemies!

It’s still too early to judge, though, so look for our review next month for the full details. But so far? We’re really digging Super Robot Taisen OG Saga: Endless Frontier.