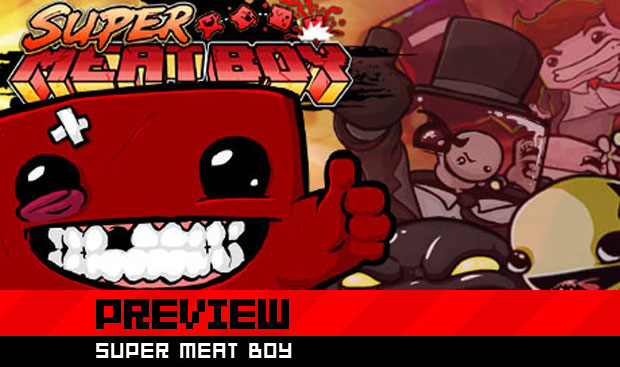 Super Meat Boy is already a success story. Thousands of free games hit Newgrounds every year, and for Meat Boy to rise above them all to be super-remade into a WiiWare/PC retail product is an achievement in itself. I haven’t heard of a Newgrounds success story this big since Alien Hominid went retail on the GameCube/Xbox/PS2 all those years ago.

Team Meat has been working for over a year now, long before New Super Mario Bros. Wii blew the doors off E3 09. Now that Mario has successfully returned to home console roots in the genre that made him famous, 2D platformers stand in a very different position within the gaming landscape. A genre that was recently viewed as a near-dead holdover from a bygone era has now proven itself to be a mainstream-friendly, multi-million-dollar cash cow again.

So if 2D platformers have returned to the forefront of the gaming world, where does that leave Super Meat Boy? Does this once very niche-looking game have a chance at mainstream success in this post-NSMB Wii world? And perhaps more importantly to the game’s developers, what are the chances that Super Meat Boy will sell nearly one million units in Japan in its first week?

In Super Meat Boy, you play as Meat Boy, an open wound on two legs who leaves a long trail of red yuck wherever he goes. Meat Boy spends his days struggling to rescue a living bandage named (yep) Bandage Girl who always seems just out of reach. She’s been kidnapped by a very selfish, immature, hateful fetus who can fly and wears a monocle. (He’s also a doctor.) Meat Boy’s world is a place of constant pain. In this preview build of the game, he faces no real enemies. Rabbits, squirrels, and birds flutter about now and again, but they’re pretty harmless. The only damage they do to Meat Boy (and the player) is of the psychological variety. Seeing them run headlong into the many, many saws, blades, flying circular saws, and flames that litter nearly every map in the game is equal parts amusing and disturbing. These poor little creatures could be you. If you don’t give it everything you’ve got, you too will quickly be decorating the scenery with your blood and guts.

Thankfully, Meat Boy is decked out with tons of skills: he’s got speed on par with Sonic, a floaty jump that puts Mario’s to shame, Mega Man X’s wall-kick, and a special slipperiness that is unique to Meat Boy alone. Controlling Meat Boy feels special. Figuring out how to maximize his abilities hearkens back to a time when every 2D platforming “mascot” had his/her own way of “steering.” Arthur, Samus, and Simon Belmont all required a different skill set to control effectively. Meat Boy is no different. Half the fun of the game is learning exactly what the little bastard can do, and how to make him do it. Despite his multiple skills, Meat Boy dies… a lot.

After the first few levels, the game makes a point to confront you with obstacles that seem completely insurmountable. With practice, you’ll be able to match these truly daunting play fields with equally impressive acrobatics. Rest assured, though, that there will be many points in the game where you will die at least twenty times a minute. But, chances are, these casual deaths won’t really bother you. Like in Mega Man and Resident Evil, Super Meat Boy‘s death scenes actually feel like a reward.

Seeing Meat Boy explode all over town and permanently stain the environment in a lovely shade of red is a satisfying experience in itself. Endless lives, and respawn points just a few seconds away from the point of death, also go a long way toward keeping things from getting too frustrating. Death may be a roadblock, but it’s never much of a setback. Many levels can be completed in less than ten seconds, which gives the game a rapid pace on par with Half-Minute Hero.

Coolest of all are the replays that hit after you’ve beaten a level. If it took you a minute to beat a stage, and you died twenty times in that minute, you’ll get to see each of your twenty deaths replayed in real time, and at the same time. Remembering the times that you completely bailed and got your ass mutilated in a game has never been more fun.

If you grow bored of bloody explosions, you can always switch things up for rainbows. Commander Video from the Bit.Trip series is Super Meat Boy’s first unlockable character, and he leaks happy colors in the same way that Meat Boy leaks bodily fluids. He also handles completely differently, with a slower pace and a Princess Peach-style hover jump. The Commander is definitely a better choice for slow, calculating players who aren’t looking to race through a level. He doesn’t get into danger as easily, but he can’t get out of it as easily, either.

The irony is that to unlock Commander Video, you’ll need the skills to race through at least one level. All of the game’s 20 unlockable characters (including the Commander) are found in specific warp zones. Each of the game’s worlds will have four warp zones, but only one of them will house a new character. Commander Video’s warp zone (which features a truly awesome cut-scene) is themed after a classic Atari 2600 game, and requires you to make specific use of his special floaty jump.

Other warp zones bring you to places rendered in Game Boy graphics, or to an area that smacks of the original Metroid on the NES. Music and sound effects change to chiptune quality in these retro worlds. Along with the sudden application of a strict “three lives and you start over” rule, these retro levels will effectively trick you into thinking that you’re playing a game that’s over ten years old.

On top of these retro levels, each world in Super Meat Boy has ten additional “dark world” stages that are only unlocked by beating “standard” stages at lightning speeds. These extra levels do a lot to add variety, but mixing things up isn’t actually all that necessary. Most of the levels have great variance in aesthetic as it is. Bold choices are made with color and light on a regular basis. Where the previous stage may have taken place in a purple, rainy storm drain, the next may color all of the game’s solid objects in pure white, while painting the background in light blue.

On the next stage, the world may be consumed in flames, and in the next, an unnatural green haze. If you think these unpredictable and playful palette transformations sound a lot like the visual style of unreleased indie darling Night Game, you might be on to something. One of Super Meat Boy‘s darkest stages is actually called Nightgame. Pretty sneaky, Team Meat.

So in case you couldn’t tell, I really had a great time with this beta. It contains 50 levels in all (20 standard, 20 “dark world,” and 10 warp zone stages), which kept me entertained for more than a couple of hours. This is just a fraction of all the levels planned for the final build of the game, which is supposed to contain over 300 stages. That’s not even counting the boss fights and multiplayer modes, which are yet to be fully revealed.

There are some things I’d change about the game, though. If it were up to me, I’d give the player the option for multiple soundtracks, like in Dr. Mario. There is an overworld theme and a boss theme, but for regular play, you get just one composition. It’s nice that it gets altered a bit when you enter the dark world and warp zones, but playing Super Meat Boy for three hours straight to the same song can get a bit monotonous. Also, a mini-map of each stage for the level select screen would do a lot to help the player keep track of which stage is which. Each stage has a name and a number, but with forty levels per world, it’s pretty easy to mix some of them up.

That’s just nitpicking, though. Unless something goes terribly wrong between now and the game’s release, Super Meat Boy has all the makings of a classic. The only thing I could see holding the game back is its excessive levels of gore. An M-rating may be the kiss of death for the WiiWare version of the game, and if World of Goo‘s sales are any indication, Super Meat Boy needs to sell on WiiWare to turn a profit.

Financially successful or not, I know I’ll be picking up the game when it releases next year. I haven’t had this much fun with a 2D platformer since New Super Mario Bros. Wii.