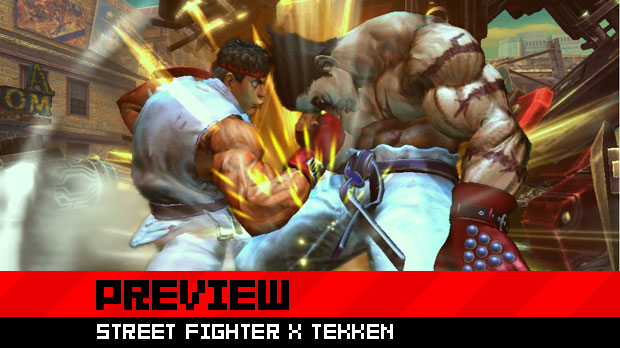 “The temptation is there, for example, to have a game where Kazuya eats poop, for instance,” jokes Street Fighter x Tekken producer, Yoshinori Ono.

He’s kidding, of course. Well, mostly. For years Namco Bandai and and Capcom have been at the forefront of a fighting game rivalry, the former with its Tekken franchise and Capcom with the recently reinvigorated Street Fighter series. With Capcom’s Street Fighter x Tekken, the publisher’s take on the rivalry goes public, with the two game universes colliding in an ultimate fighting game showdown.

It’s only fair: Namco Bandai will have its chance to to have its voice heard with Tekken x Street Fighter. But Capcom’s already has a leg up on its competition — it showed us an early (but completely playable) build of Street Fighter x Tekken at its Captivate event in Miami last week.

Spoiler: the only taste Kazuya will have to wash out of his mouth will be the sweat on Ryu’s knuckles. 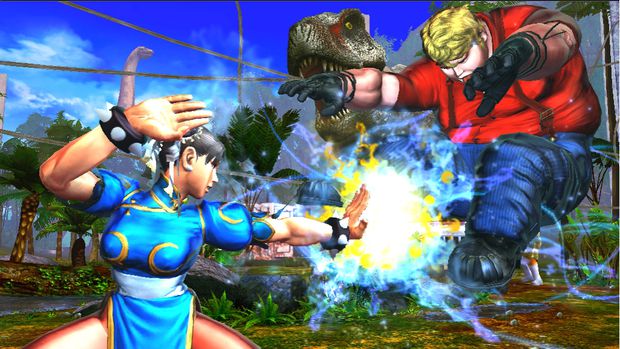 After revealing the game with a trailer at Comic-Con last year, Capcom went dark, leading fans to speculate what to expect from this epic gaming confrontation. If you guessed it would play like classic 2D Street Fighter titles, you were mostly — but only partially — correct.

What Capcom is striving for, according to Oni, is creating a game that’s approachable for longtime fans of both Street Fighter and Tekken. While both games are basically about pummeling you opponent to a bloody pulp, the approach players take to battles couldn’t be more different. Whereas Street Fighter is traditionally about taking a defensive posture, waiting to see how your opponent will react, Tekken‘s bread and butter has always been aggression. Namco’s fighter has more of a confrontation style, a barrage of combos sometimes thrown right out of the gate.

Street Fighter x Tekken takes on the traditional Capcom 8-direction, six-button combat controls in a 2D space. It’s a tag-based game, one that’s smiler to Tekken‘s tag system — the losing team is whoever has a single fighter knocked out first. The first fighters I saw in action were Street Fighter stalwarts Ryu and Ken, battling it out in a training room like the one seen in Street Fighter IV. At first glance, it looks like Street Fighter IV — both Ryu and Ken are tossing off Hadoukens at one another in typical Capcom fighting game fashion. 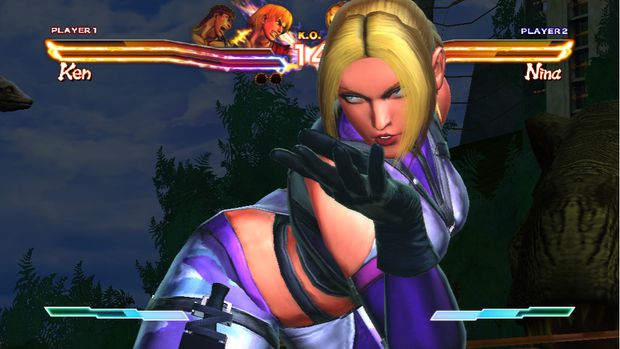 It’s when both players are swapped out to Tekken‘s token brawlers, Nina and Kazuya, that the difference in gameplay start to creep out. While the basic controls are the same (eight-way joystick movements and six-buttons worth of attacks), there’s one small change: they have standard Tekken-style combos. Those familiar with Tekken know its four-button attack gameplay, with combos strung together by predetermined button presses. Tekken players should be relieved to learn that they’ve made they’re way into this new fighter, and they’ll be immediately familiar. One example is Kazuya’s “Demon’s Wrath” combat chain, which has been brought over faithfully to Street Fighter x Tekken. When I say “faithfully,” I mean it — the button layout for the combo is identical.

So you might be wondering how this work, considering there are six buttons players can work with as opposed to the established four of Tekken. The good news is that by using the leftmost four buttons of the Street Fighter layout (that’s light punch, medium punch, light kick, and medium kick), you can pull off many of the combos you’re familiar with.

The idea, says Ono, is to make a game that’s immediately familiar to fans of both games. He even says that if Tekken fans want to completely ignore the right most attacks (the heavy punch and the heavy kick), they can and still have what he calls a “satisfying experience.”

“We’re kind of hoping for Tekken fans to jump in, control their Tekken characters in the standard “Tekken-y” sort of way,” says Ono. “[They’ll] actually get used to it, start getting more and more into the Street Fighter style of controls and really understand the depth of the game that’s been offered.” 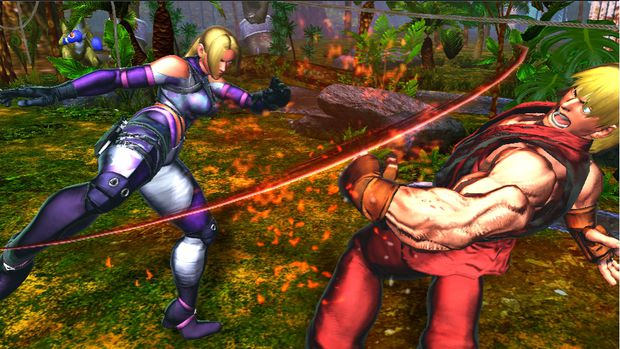 Going hands on with the game, one thing seems immediately obvious to me: it feels, at its core, like both Tekken and Street Fighter. But oddly enough, it’s truly unlike either experience. In blending Street Fighter and Tekken gameplay, Capcom may have stumbled upon something completely its own… and the results have potential to be a more enjoyable experience than any Tekken or Street Fighter game to date.

That’s a bold statement, and one that may eventually come to bite me in the ass. But within minutes of getting my hands on the sticks, I started to see the possibilities of what the blend of fighting game styles had to offer. Street Fighter x Tekken is designed in such a way that the styles don’t collide as much as they coalesce. You can be playing standard Street Fighter style one second, with liberal use of jump kicks, and immediately dash into a Tekken-style combo.

While the specifics of the new gameplay systems in the game are being held close to Capcom’s chest for now, I was already able to see a few changes in play. One example was the ability to “charge” Ryu’s Hadouken. You pull of the standard fireball motion and instead of tapping the button, you hold it. The longer you hold it, the more powerful the blast upon release. Hold it indefinitely, and you’ve got your “super” built up, it will automatically launch into your most powerful attack. Similar “charge” attacks were found with other Street Fighter character (Ken’s hurricane kick for example), as well as in some on the Tekken side of things. 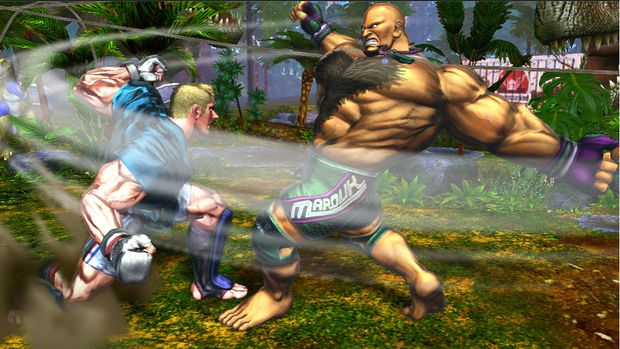 “[For] the Street Fighter side of things,” explains Ono about the character selection process, “what we didn’t want to do is limit it to Street Fighter IV, because that’s very easy, they’re a very similar style.”

What he says is that they have their “eyes cast on a much wider range, on the entire Street Fighter universe.” We may even see some familiar, yet somewhat forgotten face: “There’s certain characters that haven’t appeared in a while or at all, and the people have been requesting them for years. We’re going to do our best to get as many of those characters in, as well.”

On the Tekken side, he says the initial choices are based on popularity; “we have to get the basics in there,” he explains. They’re also looking at adding some of the “wacky kind of stuff” to the game, too, which leaves my fantasy of Ryu beating up a panda still on the table. But it’s also a case of finding the “least Street Fighter-y” fighters, too, he says.

Ono wouldn’t say how many fighters will make the final cut, but did say to expect more reveals at events like Comic-Con, E3, and gamescom as we approach the game’s 2012 release. 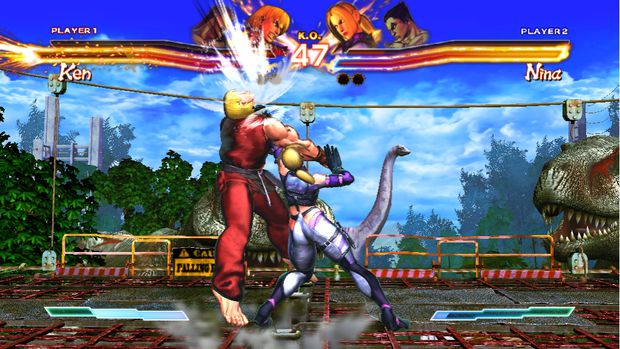 Surprisingly, Ono also tells us that Namco will have almost no input in the game at all. He says there’s a “distinct line drawn in the sand, over which neither party will cross.”

“There’s absolutely no information shared,” he says. “The first Namco will see of the trailer, maybe they’ll see it at 1UP or Destructoid after the fact. We don’t share that stuff with them.” [Note: I shared my Ono question and answer session with writer Andrew Hayward, who was covering the event for 1UP.]

“They also don’t share anything that they’re doing on their version of the game,” he explains. “It was deliberately structured that way so that we couldn’t have too many cooks spoiling the soup.”

The rivalry between the two companies is even being played up by Ono and Tekken producer Katsuhiro Harada. Ono talks of the publicly staged “hatred” the two developers have for one another and the competing series. And with such a divide between the development of both games, I have to wonder: what happens if one game is great, lauded by critics and gamers, and the other title is panned? What if, for instance, Street Fighter x Tekken gets an average Metacritic rating in the 90s and Namco’s take languishes in the 70s or lower. Where does that put the relationship between the two publishers? What if, heaven forbid, it’s the other way around?

Ono laughs, smiles, and leaves me with a closing Hadouken sent in Namco’s direction: “The ‘other way around’ is not going to happen. The 70s and 90s thing actually sounds like a scarily accurate prediction.”