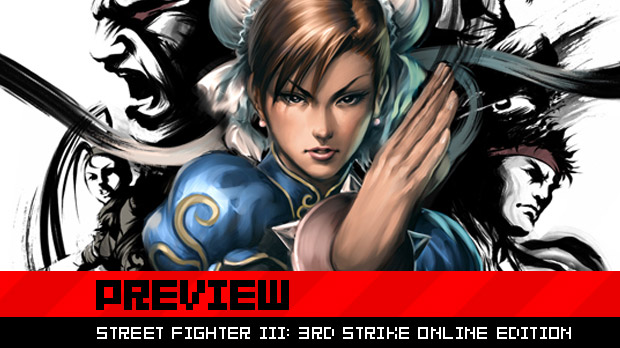 Since starting the fighting game renaissance with 2009’s Street Fighter IV, Capcom has continued to stay at the helm with expansions, HD remakes of classics, and revitalizations of other beloved franchises such as Marvel vs. Capcom. Sporting a crisp HD look, Theater mode, challenge modes, and (most importantly) an online mode, Street Fighter III: 3rd Strike Online Edition is a love letter to the fans who have supported it for the past decade, as well as a push to bring in a wider audience to one of Street Fighter‘s less popular entries.

Capcom recently invited us to get one last look at the game and some hands-on time before its release in the coming weeks.

As mentioned already, 3rd Strike has been remastered in HD, and all of the menu art has been completely redone to look pretty in hi-def as well. The classic menu art remains but only in the character select screen, where the new art is used for scroll-over images while the classic art is used for character icons. Also in the character select screen are two new fan-requested features — a simple random character option and the ability to map and re-assign button commands and inputs.

Once in-game, 3rd Strike uses graphical filters to upscale the game for HD displays, with all the characters having their own filter to make them look as clean as possible. There is an option to switch back to the original graphics, but of course, it looks very pixilated on modern displays. There are other display options such as the arcade cabinet mode, which not only gives you the original aspect ratio, but also shows scan lines and a bent screen in order to emulate the look of old-school cabinets. Every display mode (with the obvious exception of full screen) preserves the original arcade aspect ratio, leaving space within the borders of the screen for 3rd Strike‘s challenges.

Challenges in 3rd Strike are a series of dynamic task that players can complete over the game’s various offline and online modes. These range from throwing a certain number of fireballs to parrying entire super moves, plus some challenges that are character-specific. Similar to challenges are trials, specific sequences that serve as a way to ease in new players and welcome back seasoned veterans.

The trials in the game all revolve around learning the characters and mechanics. For example, the parry system of 3rd Strike is arguably the defining feature that separates it from all other entries in the series. It gives players a safe haven to avoid chip damage while blocking when they find themselves in situations where they can’t afford to get hurt. In the parry trial mode, players start off with easy objectives such as parrying one fireball. The farther you go into this trial, the more advanced the tasks become, culminating with the game’s making you recreate Daigo Umehara’s famous EVO win over Justin Wong.

Challenges and trials are also tools for the game to track stats and earn points to spend in the vault. The vault is 3rd Strike‘s unlock market (think the Krypt from Mortal Kombat) where players can spend their vault points on well over 200 pieces of content. A good amount of it is art, both classic and new, but there are also character endings, the original intro video, stage backgrounds, original music, and remastered tracks. One of the cooler vault features is the ability to take unlocked music and set it as your background theme for all the menus. Speaking of which, the songs in 3rd Strike have been remastered by Simon Viklund (who also remastered the music of Bionic Commando Rearmed) with the vocal work done by Adam Tensta, a Swedish rapper and Street Fighter enthusiast.

As great as the remixes and masterings are, the biggest addition is online play, of which there are a number of modes available. There are standard ranked matches and player matches, the latter offering a spectator mode in which six people watch as two players duke it out. There is also a King of the Hill variant for player matches in addition to an eight-player tournament mode.

The glue holding the online suite together is the fan-requested GGPO middleware. Basically, this net code allows 3rd Strike to hide lag and offer players a smooth offline-like experience. If you’re wondering exactly how GGPO “hides” lag, here is the simple version: the game can record and remember exactly who pressed what button at what time, so when lag interferes, the game refreshes faster than the eye can see as all button prompts register in the order they were pressed. If lag is particularly potent, GGPO can still refresh the game, though at a cost to graphical fidelity. There will be some noticeable screen-shaking when the net code is dealing with really bad connections, but Capcom stands by the idea that this is a small sacrifice for the smoothness of play on offer.

The final fan-requested (notice the theme) piece to 3rd Strike‘s re-release is the Theater mode. Theater mode’s setup is easy enough to understand — when you play a game, that match is automatically sent to your unsaved folder, which stores your last 100 matches. From there, you can save games (200 max) and play them back offline or online with seven other people. You can also upload matches to Capcom’s website and search for other games by players who won, players who lost, characters used, and so on. You can even upload matches directly to YouTube!

Theater mode offers a nice feature set to be sure, but I found it disappointing that there is no option for frame-by-frame playback. In a genre where winners, losers, and WTF moments can be defined by such minute details, being able to step through frames would have been very welcoming. Just get your thumbs ready to mash the play and pause buttons to see those nitty-gritty details!

In any case, Street Fighter III: 3rd Strike Online Edition is shaping up very nicely for its release later this month.