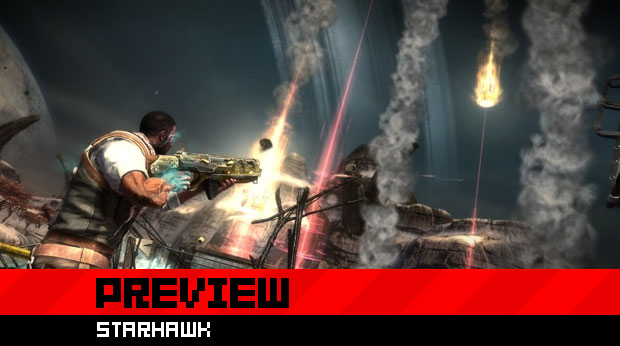 Sony Santa Monica and Incognito released Warhawk, a fast vehicle/dogfight multiplayer third-person shooter for the PS3, back in 2007. Since then there has been a goal to build on this popular game and do something special with the multiplayer genre. This sequel, Starhawk, is their attempt at this.

The idea behind Starhawk was to keep the same style of gameplay as Warhawk, but stick it in a new universe, and then add in a much deeper multiplayer functionality. The team also wanted to add in a new single player component to the mix. Both would be using the team’s unique new gameplay system that centers around the freedom of instant creation of items, weapons, allies and buildings and much more, all in a big, free arena. It sounds different, but know that it works wonderfully. Also know that Sony has a huge PS3 release waiting in the wings, and that it could forever change how you look at multiplayer shooters.

Starhawk is set in the future, in a distant frontier in space. Human settlements have moved into every corner of space by now, making it a vast, lawless frontier. Many planets have been populated with new colonies in this period called The Rush, a time when men searched for and mined powerful Rift energy.  These miners, called Rifters, search the universe for this resource, at first for fame and fortune, but later in worship. This Rift energy, often called blue gold, is very dangerous. Rifters will begin to mutate after contact with the resource, becoming stronger, but unrecognizable, with their skeletons pushing outside of their skin (among other deformities). These mutated Rifters form groups to protect what they worship, and will go to great lengths to defend it from others.

The same Rift energy that sets up the story also fuels the gameplay systems. In most multiplayer shooters you’ll start at the beginning of a map, work through a layout, fight planted AI enemies and work your way through all the preset obstacles. Starhawk turns the system on its head by getting rid of paths. Instead, they’ve made each map an open region, where you and your enemies are free to roam. Instead of fighting AI in predesignated locations, they’re all free moving, with intelligence that lets them mingle and spawn dynamically, and react to your strategies. 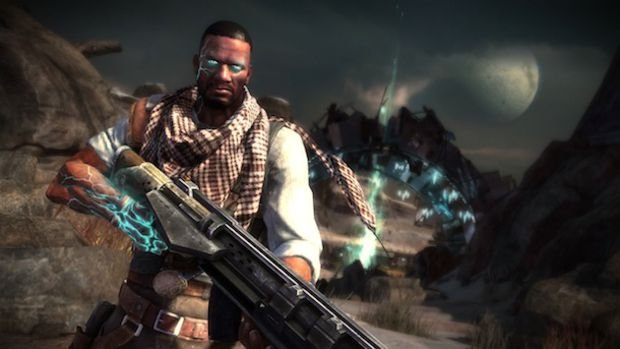 The Rift energy comes in with the player’s ability to create the layout on the fly while the game is running, leaving them to solve the current mission in any way they please. This Build & Battle system lets players freely build turrets, launch pods, garages, buildings, bunkers and more, anywhere and at any time. Players are given complete freedom to solve problems in their own style, with no one right way to do things. Rift energy is used to build, and the built items are used to kill, which brings in more Rift energy. It’s a simple and fast gameplay system, and opens the door to all kinds of new strategy and gameplay that makes the current standard shooter formula look a bit tired in comparison.

Starhawk‘s story follows Emmett Graves, a human that was exposed to Rift energy, but never fully mutated like other exposed miners. He keeps his human form and mind, but still has the poisonous and empowering Rift energy in his system. A regulator implanted in his spine has kept him alive, but he lives every day like his last as he has no idea if this technology will continue to keep him alive. Being partially mutated, he is also an outcast, but he takes up work as a sort of hired gun, working to defend mines around space as a rift salvager. In the beginning of the story Emmett and his partner take a contract to defend Echo, a moon of planet Dust.

In the single-player mission I played, Emmett drops down on moon Echo, where a communications center relay is still standing, but needs power. The level eases players into the action with what looks to be a standard third-person shooter at first, with gunning and sniping of attacking outcasts, which have been nicknamed Scabs by Emmett and his partner, a gear man named Cutter. I moved Emmett down into a dusty valley to find outcasts worshiping a rift, shooting some Scabs in the back when their guard was down. This caused many outcasts to swarm my position, keeping me from my mission of powering up the relay. 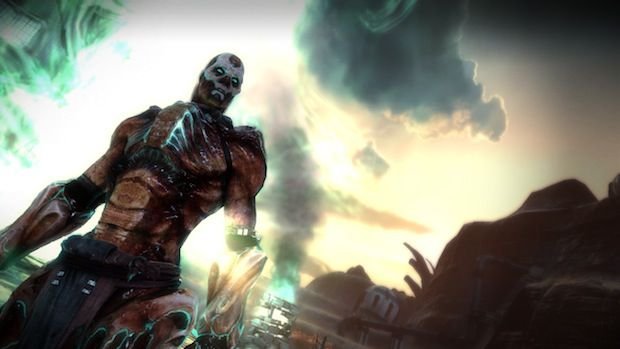 The level slowly eased me into the Build & Battle system with the early ability to use my current Rift energy stock to build turrets to help gun down attackers. By pressing the Triangle button, a circular menu is displayed. By tilting the right analog stick in the direction of any displayed item and releasing the Triangle button, the selected item will be dropped any area I determined, seemingly direct from space. After selecting a location and a short countdown timer a turret came firmly down from the sky, crashing into the ground with a satisfying thud. It instantly came to life, gunning down Scabs in front of it. Later I could build a Pod Beacon that would continue to bring a maximum of three allies to help with the fight as long as it was still standing. In fact, anything available can be built with enough Rift energy orbs in stock

As I battled against the current wave, a countdown timer was displayed in a separate zone, indicating that another wave of outcasts was on their way. I learned from watching an earlier demonstration that I could use Rift energy to drop in armored walls strategically to put a barrier between the relay I was defending and the incoming wave. Using this choke point worked well, but another wave was on the way, and this one would have flying manned crafts called Hawks. I was able to build my own launch pad to launch my own Hawks, letting me take to the sky for some airplay to take out this last wave and complete the mission.

My build choices fit my own style of gameplay, but by no means were the only way to carry out this mission to connect and later protect a communications center. LightBox Interactive says that the game rewards you on your creativity in solving these missions. I could have built to bring in more allies, letting me sit back and watch the fight. I could have also stayed on the ground by building better guns to take out Hawks, instead of taking to the air. In fact, I was told it is possible to go through some missions with no killing at all! The only wrong strategy is one that does not have you successfully clearing your mission. 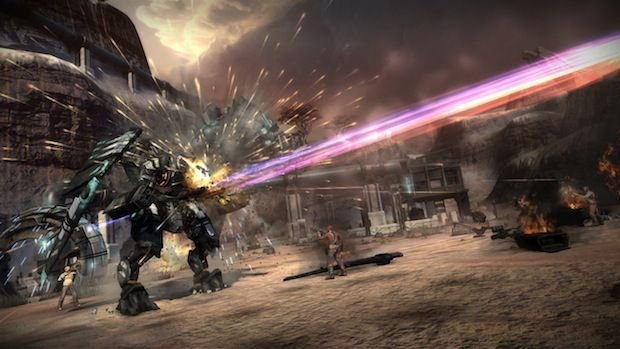 Imagine giving every player in multiplayer the ability to build anything at any place in any map, in any game type. Warhawk was already known for its fast-paced, insane multiplayer battles, but this Build & Battle system in Starhawk takes it over the top. With the increased possibilities this system provides, tactics have to constantly evolve, making every type of standard multiplayer game mode newly fresh. Lightbox Interactive says that they had play tests that have lasted over five hours on the same map. They say that with all the possibilities provided, battles play out differently every single time.

The few tries I had in sessions of Capture The Flag were a blast, and a lot of my enjoyment came out of seeing how this battle system opens the doors for player types beyond the typical offensive and defensive positions. At first, my defensive tendencies took over, and I found myself building a sniper tower at a prime spot, and then manning it to pick off attackers. Later I tried building a wall in front of my base and found that walls could be linked together to create gates that only allies could enter and exit. Bunkers could also be built, and they come fully stocked with fine defensive weaponry including missile launches to take incoming Hawks out of the sky. Later I found that with some communication, some really advanced strategies could be devised to keep the enemy out of the base. 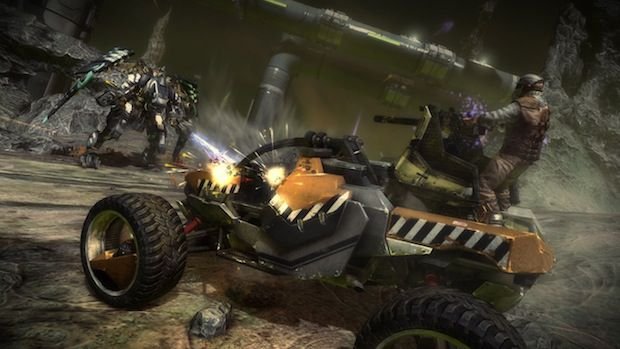 Pure offense was a joy with all the fun vehicle and weapon types available in Starhawk, though I’m usually more comfortable on the defensive side. An offshoot of the defensive player, the Troll, is made possible with ease of building in any place on the map. Imagine taking a ride along with an ally in a jeep to an area in front of an enemy base and then quickly jumping out to build a wall that holds the enemy in their base. While full-on offensive players are busy taking out any attackers, I found myself helping out with the placement of obstacles to create bottlenecks. I dreamed of sneaking past the enemy guard to create a bunker behind their base lines so that I could constantly bombard them with missiles. I could never pull it off, but I was told that it was easily possible.

The Build and Battle gameplay system allows a different type of gamer to finally give the skilled shooter player a run for his money. Creative types and troubleshooters can now stand toe to toe with the headshot wonders of the world now. The wealth of possibilities this new system provides makes Starhawk‘s multiplayer side much more accessible than Warhawk was. That said, the game still manages to keep that fast-paced, addictive multiplayer action that Warhawk was known for.

Warhawk‘s multiplayer game was already considered to be a gratifying and polished experience, but LightBox wanted to go bigger and better with this new outing, and with their Build & Battle gameplay system and area-based maps, they’ve found a way to do so. A side benefit is that new and different types of gamers will be enticed by these new creative possibilities, which will likely make Starhawk an even more popular online game than its predecessor. Add in some of the teased multiplayer improvements, like cross-server clan voice chat and super specific tournament creation and scheduling, and you’ve got a perfect recipe for success. And that’s not even mentioning the addition of a single-player mission, which is shaping up to be great on its own. Get ready, folks: Starhawk is poised to make a major impact on multiplayer gaming.